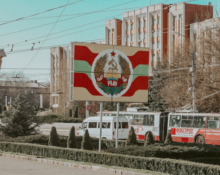 Agnieszka Miarka is a research assistant at the Institute of Political Science, University of Silesia in Katowice, Poland. She researches unrecognized states in the post-Soviet space, domestic and foreign policies of post-communist states, and armed conflicts in the twenty-first century.

An unrecognized state is a political entity that possesses all the attributes of statehood (e.g., has armed forces, creates foreign policy) but lacks the international recognition of statehood status. One example of such an entity is the Pridnestrovian Moldavian Republic (PMR). Since the end of the Moldovan-Transnistrian war in the 1990s, it has been functioning as a de facto independent entity, even though the international community recognizes Transnistria as an integral part of Moldova. Russia is strengthening the statehood of PMRs, using them as a useful instrument in its foreign policy.

Cooperation between the Russian Federation and Transnistria is multi-sectoral. Strengthening bilateral relations is a strategic goal of the authorities in Tiraspol. Both political decision-makers and the citizens seek good relations with Russia to guarantee the parastatal state’s existence in its present form, and as a way to strengthen the welfare of its society. Intensively developed bilateral relations occur primarily in the areas of military, economic, social, political, and diplomatic cooperation.

A second dimension of Russian military support to the unrecognized PMR is the Russian Military Operations Group’s presence in the Transnistrian Region of the Republic of Moldova. Both variants of Russia’s armed forces operating in Transnistria are derived from the former 14th Soviet Army. The composition of the Operational Group oscillates between 1000 and 1200 soldiers. The political decision-makers treat the presence of Russian armed forces in the region of Transnistria as a guarantee of the uninterrupted functioning of the parastatal state in its present form.

The concentration of potential on the Transnistrian-Ukrainian border could contribute to the destabilization of the southern part of Ukraine, the Odessa region. Consequently, Russian armed forces in the Transnistrian region directly threaten Moldova’s security and constitute a challenge to Ukraine.

Transnistria is potentially another subject of “the Russian World” (rus. russkij mir). Moreover, financial aid is one of the factors making Transnistria dependent on Russia. Russia’s natural gas supplies are essential for the Transnistrian economy. Despite the official narrative about the price of gas remaining the same for Chişinău and Tiraspol, the local company Tiraspoltransgaz sells gas in the parastate territory at prices lower than purchase. Due to the small internal market, Tiraspol focuses primarily on exports of its goods to foreign markets.

Moscow is a key trading partner for Tiraspol. According to 2018 data from the State Customs Committee of the PMR, relations with Russia account for 29 percent of Transnistrian trade. Intensive work between entities stresses the Russian labor market’s importance, which generates significant revenues for the Transnistrian budget. The majority of the parastate’s inhabitants who decide to work abroad are now going to Russia. For social security, the Russian Federation pays out allowances for Pridniestrovian residents’ pensions and supports health care and education.

The leading decision-makers of the Republic of Moldova recognize the threat to security, both internally and regionally from the Russian Federation, and have taken steps to minimize Russian impact. Cooperation between Moldova and Ukraine has focused on tightening the border and creating common customs control points. Moldova is also taking steps to remove the Russian Federation’s armed forces from the Transnistrian territory. The Moldovan Parliament voted in favor of a declaration calling on Russia to withdraw its armed forces from Transnistria.

Moreover, the UN General Assembly’s 2018 resolution on the withdrawal of Russian armed forces from Transnistria is an important step for the Chişinău administration. The authors of the resolution pointed out that the Russian Military Operations Group is not part of the military component of the Joint Control Commission, while at the same time stressing that these forces carry out illegal military exercises with separatist formations from the east, producing a direct threat to the security and integrity of Moldova and undermining international efforts to achieve a peaceful settlement of the Transnistria conflict. The resolution therefore calls on the Russian Federation to complete the process of removing Russian soldiers and weapons from Moldovan territory. The National Defense Strategy for 2018-2022 (Republic of Moldova), specifically point 13 of the first chapter, describes its security environment points to Transnistria. The direct threat to the realization of Chişinău’s interests is the military potential of separatist forces with external support. Russian armed groups remain illegally stationed in this area, contrary to the constitutional provisions of Moldova.

The Russian Federation has a significant influence on Moldova’s foreign policy through its multifaceted support of Transnistria. Russia supports the unrecognized state’s independence because of this cooperation’s strategic dimension. The lack of control over the country’s entire territory disqualifies Moldova as a potential candidate for NATO membership in withdrawal from neutral status. The presence of the Russian Federation’s armed forces in the Transnistrian area reinforces Moldova’s fears of military support for the separatists of the region in the event of an escalation in the mood of its inhabitants, which forces Moldovan authorities to take into account the Russian element in the political line being created. Further tightening of cooperation between NATO and Chişinău may result in Moscow using Tiraspol as an instrument to prevent the collaboration above and, at the same time, keep Moldova in the Russian sphere of influence. Russia will treat the approximation of Alliance structures as a threat to national security and its privileged position in the post-Soviet area.