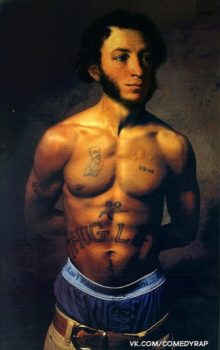 You might be wondering what happened to Chapter Four.  What happened was that, when I started working on it, I came to the unavoidable conclusion that the chapter on transnational adoption is a much better fit with the volume on melancholia, no matter how hard I tried to make it work for this one.

So I have moved it.  And I have also reconsidered the structure of Chapter One, which went all the way from the New Man through sovok to bydlo and vatnik.  This is a bit much (it’s overstuffed) and also not enough (I never got around to talking about the gopniki).  So I am now moving the last few entries of Chapter One to Chapter Two:  The Discreet Charm of the Squatting Slav.  I will expand that chapter offline, as part of the revisions to the MS.  The new table of contents can be found on Russia’s Alien Nations.

As a result, I find myself writing this provisional conclusion.  When it’s done, I’m suspending Russia’s Alien Nations for at least a year, giving me time to revise Volume I (The Secret Identities of Post-Socialism) while writing my next projects (a book on Marvel Comics in the 1970s, and possibly a short book on Russian memes and viral video).

Anyway, if anyone is reading this, thank you for sticking with me this far.  There’s not much left before the finish line.]

The Poet and the Crowd

This book began with a question about an unsatisfactory answer: “He’s Russian. That explains a lot.” The tag line from The Barber of Siberia alludes to wisdom while remaining defiantly content-free.  By assuming that the definition of “Russian” is common knowledge, Mikhalkov reaps the benefits of a flattering patriotic marketing strategy without having to commit to anything.  Or rather, the film itself becomes the thesis, and if it does its job correctly, it positions the viewers to accept this thesis as confirmation of something they already know rather than as a polemical stance they can choose to adopt or reject.

As a contribution to Russian identity discourses, The Barber of Siberia was a tonic for an old malady:  the self-hatred that has been an integral part of unofficial Soviet and Russian identities.  But this is a remedy that is more homeopathic than medical, as self-aggrandizement and self-hatred are not so much binary opposites as they are overlapping categories, based on the same habit of anxious self-assessment through the eyes of an imagined Other.

In terms of its content, The Barber of Siberia contributes little of substance to actual debates about Russian identity.  Structurally, however, it is a powerful rebuke of all the phenomena discussed in the previous chapter.  At the turn of the millennium, Mikhalkov uses the tsarist 1880s to make a statement about Russianness that was meant to be valid and compelling over one hundred years later. Implicit in The Barber of Siberia is an argument for a static, eternal Russian identity that withstands the forces of history rather than being shaped by them.  Though MIkhalkov’s late nineteenth century is more a reflection of his concerns about the twentieth and twenty-first (hence the American antagonists at a time when America was irrelevant), the goal of the film is, in fan terms, decidedly affirmational rather than transformational: there is a core of Russianness that must be emphasized and preserved.

The identities examined in Chapters One through Four tend to be formally transformational (sovok, zhdun), although when they are ideologically nationalist, their transformational form can still be affirmational in content (the Orcs).  But their greatest distinction from the polemical Russianness of Mikhalkov or the official traditionalism of third-term Putin (“spiritual bonds”) is that they are improvisational.  Even if we accept any of the conflicting claims for authorship of the term “sovok”, the idea’s subsequent development cannot be attributed to any particular person or group.  The same certainly holds true for zhdun, whose original authorship is beyond dispute, but whose circulation within the Russian-speaking world is a product of the hive mind rather than any individual genius.

These imaginary figures of Russianness are generally counter-cultural.  It is not just that they are they not the product of official discourse, media, or state-supported art; in some cases, they are an obvious rebuke.  We saw that sovok is the negative, satirical counterpoint to all the variations on the “new man” or “Soviet man,” while also bringing the high-minded anti-Soviet “Homo Sovieticus” construct down from the realm of politics to self-mocking low humor.  Sovok, zhdun, and even the Russian Orc are an implicit challenge to the self-seriousness of ideological debates about Russia and its future.

As should be clear by now, these identities belong to the world of urban folklore.  As such, they have at least as much of a claim to explanatory power as anything dreamed up by writers, filmmakers, intellectuals, or Kremlin impresarios.  These are ideas whose survival and dissemination depend on their own memetic power, reproducing themselves throughout the culture because they attract either the sustained or momentary attention of cultural consumers.

This does not mean that improvisational Russian identities find no reflection in the broader culture.  Just as The Barber of Siberia offered a model of a stable, transcendent Russian self in 1999, two film’s that chronological bracketed Mikhalkov’s begin with a virtually empty vessel of improvisational Russianness and end by filling this vessel with affirmational Russian nationalist content:  Aleksei Balabanov’s 1997 Brother and its sequel, Brother 2 (2000).

Next: Brothers and Keepers