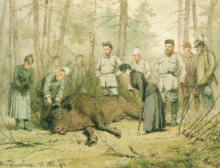 This post is adapted from a longer article, “Diplomacy in the Woods: Nature, Hunting, Masculinity, and Soviet Diplomacy under N.S. Khrushchev,” that originally appeared in Diplomatica.

Above: A depiction of Alexander III hunting boar at the Belovezhskaya pushcha in August 1894. Source

In December 1991, a group of aging men that included the leader of the RSFSR, Boris Yeltsin, and the heads of both independent Ukraine, Leonid Kravchuk, and the Republic of Belarus, Stanislav Shushkevich, gathered at Belovezhskaya pushcha, the state dacha in Viskuli, for what looked like a regular hunting outing. As described in multiple first-hand accounts, the outing unfolded according to a well-developed script: banya and massage were followed by drinking and feasting, with unlimited quantities of the favored Armenian cognac and of the local specialty, the herbal alcoholic infusion known as “Belovezhskaya,” readily available.

And there was also hunting, of course. The Ukrainian leader, Leonid Kravchuk, and his prime-minister, Vitol’d Fokin, set off for boar shooting on the morning of December 8. As reported by Shushkevich, who did not hide his animosity toward Kravchuk, two young boars were conveniently attached by ropes to a tree. Fokin successfully shot one that was later consumed by the hunting party. Kravchuk, on the other hand, missed his target and instead managed to shoot through the rope. Unexpectedly freed, one young boar happily lumbered back into the forest.

Unlike on other occasions, however, Kravchuk and Fokin were the only two members of the large party that ventured out to hunt during this trip. The rest of participants were preoccupied with more important affairs: namely, a coup that resulted in writing the Soviet Union out of existence and putting in its place a loose alliance of eleven of the fifteen former Soviet republics. Together, these formed a new political entity to be known as the Commonwealth of Independent States (CIS). The Belovezha Accords, signed on the day of Kravchuk’s and Fokin’s hunt, December 8, 1991, announced this new historical creation to the world.

To uninformed outside observers, the setting of this historic signing—a hunting party in a remote forest in Belarus—might have looked somewhat unexpected. And yet, it was entirely predictable, since by then hunting trips had long been occasions for Soviet political gatherings and negotiations, and the nature preserves in Zavidovo (near Moscow), Zales’e (Ukraine), Belovezhskaya pushcha (Belarus), and Crimea had emerged not only as exclusive leisure destinations for the Soviet party bosses, but also as spaces in which to conduct state affairs.

The Belovezha episode was but one among many others when important and, at times, course-altering political decisions were made during a hunting trip. Khrushchev’s and Brezhnev’s favorite hunting destinations in Zavidovo and Crimea, in fact, frequently served as crucial settings for doing diplomacy, Soviet style. Characterized by informality, a tendency to personalize official relationships, and, perhaps above all, by a desire to assert strength and power through a display of manliness, Soviet diplomacy often required a ritual demonstration of marksmanship skills and physical agility in order to challenge and rewrite the image of Soviet leaders as aging and inept apparatchiks. Forest preserves like Belovezhskaya pushcha became important sites where hunting was used as a strategy to confirm or challenge international hierarchies of relations, to shape new and reaffirm faltering alliances, and to demonstrate the potency of the Soviet system to visiting foreign state leaders and politicians like Josip Broz Tito, Fidel and Raul Castro, Urho Kekkonen, János Kádár, Erich Honecker, Henry Kissinger, and many others.

Some of these dignitaries—themselves avid hunters—could easily compete with such renowned Soviet marksmen as Khrushchev and Brezhnev. In fact Josip Broz Tito, well-known playboy of the Socialist world and a passionate hunter, provided the inspiration for Soviet diplomatic hunts after Khrushchev first experienced them in Yugoslavia. Long-serving Finnish president Urho Kekkonen, an accomplished athlete and enthusiast of “sauna politics,” also easily matched his hosts both in marksmanship and ability to consume alcohol during the post-hunting feasts.

Less able guests, meanwhile, served as targets of ridicule strategically aimed at establishing Soviet superiority. An example of such strategic ridicule is the story of Erich Honecker, who purportedly once asked to be taken hare hunting. When, as it happened, no hares were to be found at the chosen destination, the crafty forest rangers came up with an artful solution: they put a rabbit skin over a cat and released it in front of the GDR leader, who nearly had a heart attack when he saw how the quickly the hare climbed a nearby tree.

The King of Spain (or some other visiting dignitary, depending on the version of the story) similarly had quite a shock when he went bear hunting near Moscow. In the absence of bears in the local forests, one was brought from the famed Moscow circus. But before the foreign guest was able to get off any shots, the bear purportedly spotted a village woman riding by on a bicycle, recognized the familiar circus prop, chased after her, got on her abandoned bicycle, and pedaled away. True or not (and they are probably not) such stories make clear that how humorous folklore—itself part of a ritual—was used by the Soviet hosts of diplomatic hunts to create a sense of masculine hierarchy that also, they hoped, reflected a political one.

But hunting trips were central not only to the workings of foreign diplomacy, but to domestic politics as well. The plot to remove N. S. Khrushchev from power, for example, culminated during a hunt in Zavidovo, where the conspirators gathered while Khrushchev himself was hunting in Crimea. In addition, enthusiastic and active participation in hunting was crucial to advancing or ending the careers of Soviet party bureaucrats who had to learn to enjoy this outdoor activity if they wanted to be noticed by Khrushchev or Brezhnev, both avid hunters.

Studying the hunting trips of Soviet leaders thus gives us important insight into both the workings of Soviet foreign relationships and internal party politics. These episodes provide new details as to  how power was produced and executed by the Soviet party elite in their relationships with foreign leaders, and, no less importantly, shed much light on the dynamics of power within their inner circle.  In the USSR, hunting outings served as occasions to create new networks, tap into existing ones, test loyalties, expel people from networks, seek admission to them, plot power rearrangements, and, above all, demonstrate contined strength and the ability to rule.