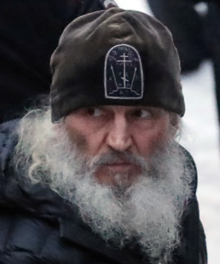 Above: Father Sergii in front of the Basmannyi Court of Moscow in 2020. Source

J. Eugene Clay is an associate professor in the School of Historical, Philosophical, and Religious Studies at Arizona State University, where he writes and lectures about religious movements in Russia and Eurasia. His latest book is the edited volume Beasts, Humans, and Transhumans in the Middle Ages and the Renaissance (Brepols 2020).

The rise and fall of the priest-monk Father Sergii (Nikolai Vasil’evich Romanov), who was sentenced in November 2021 to 42 months imprisonment for vigilantism and other crimes, illustrates Russia’s struggle to create a convincing national narrative that can bring together the imperial and Soviet pasts. For 15 years, as the spiritual confessor of the Sredneural’sk Convent of the Icon of Our Lady, Grower of Crops, Sergii fashioned a “usable past” for those Orthodox nationalists who wanted to celebrate the glories of both the imperial and the Stalinist periods. In his hardline sermons, disseminated via YouTube, Telegram, and VKontakte (the Russian equivalent of Facebook), Sergii reconciled the irreconcilable: Orthodoxy and Stalinism.

Sergii’s efforts to transform Stalin into a devout Orthodox Christian represent an extreme version of a more general tendency to rehabilitate the Soviet generalissimo. Official celebrations of the Soviet victory in the Second World War have raised Stalin’s stature. Revised history textbooks provide a unified, positive vision of Russian history, including the Stalin era. In 2019, the independent Levada Center found that 70% of Russians believed that Stalin played a “mostly positive” or “entirely positive” role in Russian history. The broader rehabilitation of Stalin and his role in defeating the Germans has helped to pave the way for Russia’s unprovoked war of aggression against Ukraine, which Kremlin leaders falsely portray as “denazification.”

Unfortunately for Sergii, his myth-making ultimately led him to denounce the Russian president, Vladimir Putin, to condemn the public health measures against the COVID-19 pandemic, and to rebel against his patriarch. Placed under a ban in April 2020, he was defrocked in July, excommunicated in October, and arrested by a SWAT team in December.

From Murderer to Monk

Sergii’s life passage from Soviet hooligan to Orthodox abbot reflects the dramatic changes in Russian society from the 1950s to the present. Born Nikolai Romanov in 1955, two years after Stalin’s death, the future monk became a policeman in the 1970s after completing his military service. Within five years, however, he was dismissed from the force and took up a life of crime.

Romanov experienced his personal transformation while in prison. After committing a brutal premeditated murder in 1984, he spent over a decade in Correctional Colony 13, a special camp for criminals with a background in law enforcement. While incarcerated, Romanov turned to religion and helped build a prison church dedicated to St. Nicholas. After his release in July 1997, Romanov pursued his monastic vocation in the new monasteries that were forming during the Russian religious renaissance of the 1990s.

With the canonization of the royal family in August 2000, Romanov found his new calling: to restore Russia through the commemoration of its newest saints. Although told that he should spend 15 to 20 years repenting of his crime of murder before attempting to become a priest, Romanov doggedly persisted in his pursuit of the monastic life. The ambitious new archbishop of Ekaterinburg, Vikentii (Morar’), welcomed Romanov’s zeal, had him tonsured as the monk Sergii, and set him to work in the new monastery at Ganya’s Pit—the mine shaft where the Bolsheviks had disposed of the corpses of their imperial victims.

Restoring Russia with the Cult of the Royal Martyrs

For both Archbishop Vikentii and the new monk Sergii, the Monastery of the Holy Royal Passion-Bearers represented the “Russian Golgotha,” where the emperor and his family had sacrificed themselves for their fatherland. “On this place, a new Russia is being created—the Russia that existed before the Sovereign abdicated his throne,” Vikentii declared in October 2000, as the foundation for the first of the monastery’s seven churches was laid.”

With Vikentii’s support, Sergii threw himself into this sacred cause. He traveled to Mount Athos in Greece, the international center of Orthodox monasticism, to collect holy relics and other gifts for the new monastery. In 2001, without having to spend 15 years in penance, Sergii was ordained as a priest. In 2002, he formally became the abbot of the rapidly growing monastic complex.

Just three years later, in April 2005, Sergii’s antisemitic bigotry and authoritarian leadership style led to his quiet removal as abbot. Enraged to learn that the popular Jewish singer Aleksandr Rozenbaum had contributed a bell tower to the Royal Passion-Bearers monastery, Sergii ordered its destruction. The resulting scandal and Sergii’s failure to complete his seminary correspondence courses convinced his superiors to transfer him to a more remote, newer convent, where he would serve as spiritual confessor.

The Convent of Our Lady, the Grower of Crops

In his new position in the Convent of Our Lady, the Grower of Crops, Sergii developed a dual reputation as a holy man of prayer and as a ruthless landowner. As he welcomed pilgrims from across Russia, he also used the convent’s strategic location to extort land from local farmers by restricting their access to water, transportation, and roads.

To his devotees, Sergii was one of a group of charismatic, wonderworking ascetics. In 2013, the Ekaterinburg diocese produced a film about the convent, The Dwelling Place of Faith and Love, which portrayed Sergii as a master of prayer—without mentioning his criminal past.

To others, Sergii became an increasingly controversial figure. Even as the diocese celebrated Sergii’s prayerfulness, he was accused of abusing the children who had been placed in the convent’s care.

On YouTube, Sergii cultivated his media presence, dramatically exorcising demons from pilgrims to the convent.

He also gave voice to a nationalist mythology that justified the invasion of Ukraine and the annexation of Crimea in 2014. Sergii increasingly defended Stalin as a misunderstood, devout Orthodox Christian. In one sermon, Sergii read from a fake will supposedly composed by Stalin shortly before his death (but actually taken from a 1997 novel). “I was never a genuine revolutionary,” the fake Stalin claimed. “My whole life has been a ceaseless struggle against Zionism, whose goal is a new world order ruled by the Jewish bourgeoisie.” Only a powerful Russia could save the world from the Jews.

The Holy Stalinist against the Russian President

Sergii’s enthusiastic, bigoted, and ahistorical embrace of Stalin paralleled a more general Russian tendency to regard the Soviet dictator positively. Elaborate celebrations of the Great Patriotic War (as Russians call  the Second World War), the restoration of the Soviet national anthem, and the liquidation of the human-rights organization Memorial have obscured Stalin’s destructive role in Russian history while accentuating his contribution as a war leader.

Sergii’s fantasies about Stalin contributed to his increasingly harsh critique of Vladimir Putin, whose friendship with global leaders abroad and the Jewish community at home demonstrated his departure from the true path. As early as 2019, Sergii denounced the Russian president as a fake: Putin had been replaced by his double, who was none other than the Antichrist.

The pandemic amplified Sergii’s voice, as he protested the public health measures taken to mitigate the spread of the disease. The church could no longer pretend that Sergii was a holy elder and publicly condemned his Stalinism in July 2020. Even so, Sergii retained control of his convent for several months until his arrest in December.

The fantasy that Stalin was actually a devout Orthodox Christian beguiled Sergii, who wanted to reconcile his love for the tsar with his nostalgia for the Soviet past. It also proved beguiling for his many followers who shared the same desire.