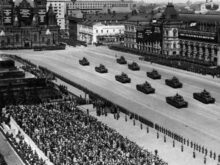 This is Part I in a two-part series. Part II will follow on Wednesday, 9/23.

Krzysztof Brzechczyn is Full Professor in the Faculty of Philosophy at Adam Mickiewicz University in Poznań, Poland and an affiliate of the Institute of National Remembrance.

The introduction of communism in Russia was supposed to lead to a modernized economy and a just society. Yet the new social system did not make the economy competitive, nor did it do away with social inequalities. Instead, Russian society fell victim to totalitarian communism. Soon after the 1917 revolution, the Bolsheviks introduced War Communism, nationalizing trade and production and depriving peasants of their land. Despite the actions of the Cheka and the Red Army, peasant revolts spread all over the country and forced the Bolsheviks to scrap plans for nationalization of agriculture and led them to announce the New Economic Policy which allowed private ownership. The Bolshevik Revolution brought about a demographic catastrophe in Russia. As Richard Pipes notes in Russia under Bolshevik Regime, the number of people in the Soviet Union in 1926 fell by 12.7 million in comparison to 1917. The causes of that great decline were fourfold: war deaths (2 million); epidemics (2 million); emigration (about 2 million); and famine (over 5 million).

Two Interpretive Lines in the Historiography of Soviet Communism

Two main axes of interpretation emerge in analyses of the origins of totalitarian communism in Russia. The first seeks its beginnings in the country’s social history. Despite external similarities between Russia and the West, Western-type social structures did not develop in the former place.  Instead, those holding political power gained significant advantages over other social classes. As Mikhail Heller and Aleksander Nekrich have written,

Many Western historians […] find the sources of the 1917 revolution in the internecine warfare of the Kievan princes, the Tatar yoke, the atrocities of Ivan the Terrible […] Reaching back into the distant past […] Western historians draw a direct line from Ivan Vasilyevich (Ivan the Terrible) to Joseph Vissarionovich (Stalin) or from Malyuta Skuratov, head of the Ivan the Terrible’s bodyguard and secret police force to Yuri Andropov, the longtime head of the KGB who recently headed the Soviet state, thus demonstrating that from the time of the Scythians Russia was inexorably heading toward the October revolution and Soviet power.

the history of the transformation of Russia – a country no better no worse than any other, one with its own peculiarities to be sure but a country comparable in all respects to the other countries of Europe – into a phenomenon such as humanity has never known.

An alternative position is presented by historian Richard Pipes, who argues that pre-revolutionary Russia was the site of a state patrimonialism based on four pillars: tsarist autocracy, that is, rule by the tsar unlimited by judiciary and legislative powers; the free use of the country’s economic resources by political authorities; the ruler’s right to dispose of his subjects as he wished (that is, an absence of both individual and collective rights; and state control of information.

The turning points that strengthened Russian patrimonialism were the so-called “Mongol-Tatar yoke,” which introduced the principle that the title of Grand Prince could be granted by the khan of the Golden Horde; the destruction of Veliky Novgorod; and the introduction by Ivan IV of the oprichnina, which enabled the tsar to harshly repress the boyars. Two additional factors of importance were Peter the Great’s reforms, which resulted in the creation of classes of merchants independent of the state, and the advent of the Okhrana during the last years of the Russian Empire. My own book, The Historical Distinctiveness of Central Europe: A Study in the Philosophy of History, describes further alternatives in Russia’s pre-Revolutionary historical development.

One controversial issue is the influence of Marxism on the totalitarian transformations that took place in Russia. In the Communist Manifesto, Marx and Engels predicted the inevitable pauperization of the working classes as a prerequisite and justification for proletarian revolution. Yet from the time the Manifesto was published in Western Europe, workers’ lives seemed to be improving, not getting worse. By the turn of the nineteenth century, this fact had contributed to the division  of Marxist thought into two streams: social-democratic and Bolshevik. Social-democratic Marxists practically gave up on the idea of revolution, with social democratic parties regularly participating in parliamentary elections and accepting both state law and the principle of gradual social change through reform. By contrast, Bolshevik Marxists were convinced that workers acting on their own could create only syndicalist consciousness. To attain the desired (from the Bolshevik perspective) outcome of revolution, workers would need the leadership and consciousness-raising of an external, organized, disciplined revolutionary party. That party would, theoretically, bring about political overthrow and introduce social change, including the elimination of private property, from the top down.

According to Andrzej Walicki, Lenin was Marx and Engels’s legitimate successor. For Walicki, the germ of totalitarianism is already present in their work — specifically in the notion of freedom as being rooted in control over social life and the free market. In addition to the genetic similarities between Marx and the Bolsheviks that Walicki points out, there also exist functional ones that can help identify those doctrinal elements capable of legitimizing a given social system. It is these ideological components that allow the variants of Marxism in question to be popularized in social systems — regardless of their creators intentions.

In Leszek Nowak’s view, Marxism became the ideological underpinning of Russian communism because Marx made some serious theoretical errors. For Nowak, Marx was correct with respect to roughly one third of social matters, but wrong on the other two thirds. Specifically, Nowak argues, Marx failed to take into account spontaneous divisions appearing in both politics and culture.

Private ownership of the means of production may well have led to economic exploitation in nineteenth-century Europe. At the same time, it constituted a strong counterbalance to the potential omnipotence of political power. Soviet Marxism obtusely equated the nationalization of industry and trade and the collectivization of peasants’ property with the wholesale abolition of economic inequalities. In its capacity as the ideology of the communist system, this version of Marxist economism obscured the fact that these drastic social changes required the accumulation of coercive means in the hands of the party apparatus, an accumulation that ultimately produced systemic social and economic inequalities rivaling those found in Western capitalism.

As an all-encompassing worldview, Soviet Marxism was an effective tool for accomplishing the goals of the Bolshevik state. Had Marxism not existed, however, I claim that the accumulation of power and property would likely have taken place anyway, albeit under other ideological auspices.