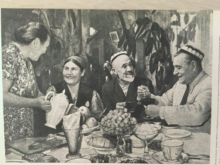 Zukhra Kasimova holds an MA in Comparative History from Central European University in Budapest, Hungary. Currently, she is a PhD candidate in the History Department at the University of Illinois at Chicago researching Soviet Central Asian social and cultural history.

With the relative liberalization of the Soviet regime after the death of Stalin in 1953, the friendship-of-the-Soviet-peoples model was readjusted in the interests of republican party elites, who utilized nationalism as a resource for building political influence. Consequently, kinship imagery acquired a horizontal rather than vertical structure. In the 1960s, the Soviet “state of nations,” according to historian Charles Shaw, promoted “friendship without hierarchy […] that emphasized lateral relations without the patronizing overtones of guidance or seniority.” Moreover, Central Asian “brothers” acquired new significance as mediators of Soviet politics (and influence) in the Muslim “Third World.”

In 1963, Izvestiia featured an article co-authored by four Central Asian writes: the Uzbek Gafur Guliam (the author of “You are not an Orphan”), the Tajik Mirzo Tursun-Zade, the Kirghiz Chingiz Aitmatov, and the Turkmen Beki Seitakov. They still used the trope of Russians as the “elder brother,” but their message was pitched to the postcolonial Muslim world. In an invitation to join in the “fight for communism,” the authors wrote:

The greatest happiness of all is to be free of [ethno-national and racial] prejudices, to stand as a proud member of a family of nations, headed by our beloved elder brother, the Russian people. It is fortunate to realize that our family is led by the most experienced, tried in the storm of revolutions, and hardened by the labor crucible, the blacksmith of the people’s happiness – our own Communist Party and its Leninist Central Committee.

Within this new context, the Shamakhmudovs were assigned a new symbolic task to represent Islamic/Eastern Sovietness on a larger, international scene. In 1965, just in time for the twentieth anniversary of Soviet defeat of Nazi Germany and for the first time since the Shamakhmudovs became an ideological “myth,” the Uzbek family travelled to Moscow to be introduced to the Moscow-based, Slavic adoptive family of Anna and Artiom Mamenko. “You adopted orphans, and so did we. Let us be brothers and sisters,” Bakhry allegedly exclaimed upon their first phone conversation with the Mamenkos.

Even as the Mamenkos were learning to cook one of the most important dishes in Uzbek cuisine—plov, the Shamakhmudovs were traveling to Moscow by train. The reports on the meetings of the two mothers, one Russian, one Uzbek, stressed that they communicated non-verbally and understood each other perfectly because they shared the universal experience of Soviet motherhood. They showed each other photographs of their adopted children. The fact that Bakhry had evidently never mastered the Russian language, did not matter, and has even lost its ideological ambivalence, because she now exemplified a national Uzbek Sovietness.