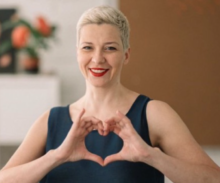 This post features the first-prize entry in All the Russias’ second Graduate Student Essay Competition.

Emily Curtin is a PhD candidate in the Anthropology Department at the CUNY Graduate Center. Her dissertation explores the political economy of the Belarusian fitness boom.

On September 8, 2020, popular Belarusian opposition figure Maria Kolesnikova was thrown in jail after a dramatic day that began with her abduction off the street by masked men and ended with her tearing up her passport at the Ukrainian border. On September 17, news of Kolesnikova’s wellbeing came in the form of a Facebook post made by her sister, which was then publicized in the press. She was fine. “Maria never ceases to amaze” the post said. “We learned that during her daily hour outdoors, she runs and does fitness.” According to her lawyer, Kolesnikova, who “has always been distinguished by strength of mind and a positive attitude in any difficult situation,” not only tries to do sports and fitness herself every day, but also leads her cellmates in exercises. “Masha knows: to win this marathon, you need to support yourself every day, step by step, and not give up.”

A month later, another letter from the 38-year-old opposition figure appeared on her Facebook page and was subsequently covered by the Belarusian press. “I’ve been very active and I look younger than I did two months ago,” she had written to a friend. Kolesnikova was not only exercising daily, but setting fitness goals for herself and monitoring her progress. “My highest scores are 350 squats in two sets and 100 push-ups in three sets. I really want to be able to do the splits! If you can recommend some cool exercises, I’d be very, very happy!”

Why were these details about how Kolesnikova spends her prison yard time, which were reported from various sources—her sister, her father, a friend and her lawyer—of enough note to merit multiple news items? What about Kolesnikova’s fitness routines in a detention center underscores her status as a role model and a moral authority for the many Belarusians who oppose the country’s authoritarian president and eagerly look forward to a new regime?

Kolesnikova, a classically trained flautist who had worked as a professional musician and an art director, only recently entered the political sphere, managing the wealthy banker and philanthropist Viktor Babariko’s 2020 presidential campaign. Babariko’s run was cut short when he himself was thrown in prison in June of 2020, allegedly for tax evasion and money laundering. He had campaigned on the slogan “I am a manager (menedzher)” because he reportedly saw the role of the president as that of ‘the leader of a company, where the people are the shareholders’,” an arrangement that resonates with what Wendy Brown calls the political rationality of neoliberalism, in which “market principles become governing principles applied by and to the state.”

After one hundred years of state socialism, Belarus appears to be headed toward a very different type of political arrangement. Until recently, Lukashenko—whose nickname is batka, meaning “father” in Belarusian—embodied the paternalistic role prevalent during the era of state socialism in Eastern Europe, and his legitimacy rested on his claim to take care of the population’s needs. In a newly-reformed Belarus, will governance be reconfigured as a business relationship? What responsibilities would this new type of citizenship entail and what benefits can people expect from a new regime? Who will be responsible for the population’s health and well-being?

While the possibility for political change has seemed nearly unimaginable under Lukashenko’s long tenure, the penetration of global consumer culture over the past decade has nonetheless helped to shape a different type of citizen-subject, even in the absence of substantial economic reform. This emerging subject strives to achieve a set of orientations that scholars associate with neoliberal economic regimes: constant investment in the self, flexibility, self-reliance, and perpetual positivity.

Through her fitness practice, Kolesnikova perfectly embodies these values. If the ideal neoliberal subject is always looking for ways to optimize her human capital, this symbolic public leader exemplifies this project by making the most of her time in prison. Kolesnikova invests in her health and appearance by using her daily one hour of outdoor time for vigorous exercise, with the result that she looks younger than she did before her detention. For the first time in years, she is sleeping seven or eight hours a night—“something unimaginable!” as she writes to a friend. Her ability to adapt to, and even benefit from, her objectively unfavorable circumstances also speaks to her flexibility, a quality that has become increasingly important in the post-Fordist age of flexible specialization and accumulation.

It is not only Kolesnikova’s ability to perform “self-care” and to maintain emotional control while in prison that demonstrates her capacity to adapt to her circumstances. Her eclectic career arc—from concert flautist to art director to political campaign manager—also reveals an acute adaptability, as does her quick pivot to work on presidential candidate Svetlana Tikhanovskaya’s campaign after her boss Babariko’s arrest. It is within this context that I want to highlight Kolesnikova’s wish, as stated in her letter to a friend, to be able to do the splits, that is, to sit with her legs extended in opposite directions at a 180-degree angle. It seems that Kolesnikova is trying to “experience the metaphor” of flexibility through her self-training, perhaps in an attempt to prepare for the unpredictable circumstances that lie ahead.

This flexibility stands in sharp relief to the extreme rigidity of President Lukashenko. Not only does Lukashenko refuse to accept that he is no longer welcome in office—as the putative (i.e., rather than official) election results and months of demonstrations have made abundantly clear—but for 25 years he has been unwilling to reform the excessively bureaucratic and (in many people’s eyes) outdated version of state socialism the country inherited from the Soviet Union.

By taking her well-being into her own hands while imprisoned, Kolesnikova demonstrates not only her ability to adapt to her surroundings, but also her self-reliance. In today’s Belarus, supporting oneself through healthy lifestyle practices is becoming increasingly important for practical, social, and moral reasons. Kolesnikova’s “positive attitude in any difficult situation” also reflects the value middle-class Belarusians are beginning to place on an outward display of cheerfulness and optimism. Sanguinity and self-reliance are linked, and both have worked to justify an ideology of individualism and the retraction of the post-war social welfare contract in the US and Europe.

In Belarus, where an extensive state support system is still in place, the expectation that one should be optimistic in “any difficult situation” may undermine the perceived need for socialized care. In the world of positive thinking, structural problems can be overcome by the sheer force of individual will. If you become ill or fail to achieve financial security, you have no one to blame but yourself.

By highlighting Kolesnikova’s uncanny ability to transform her difficult circumstances into a positive experience and investment in her future, the independent Belarusian media signals that the political figure is a “good person” and a moral authority with an understanding that this equivalency will be legible to its readers. As read through her dispatches from prison, Kolesnikova embodies the qualities one needs to survive in a post-social-welfare state characterized by precarious labor markets, heightened competition, and a lack of certainty about the future: optimism, self-reliance, and flexibility.