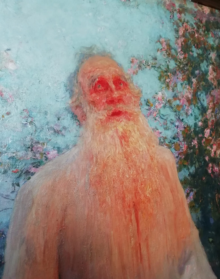 Thomas Newlin is Chair of the Russian Department at Oberlin College. He explore the question of Tolstoy-as-peasant in greater depth in his article Peasant Dreams, Peasant Nightmares: On Tolstoy and Cross‐Dressing in the current issue of The Russian Review.

In the second half of the 1880s and the early 1890s, Ilya Repin produced a series of paintings of Leo Tolstoy that quickly became iconic, including “Tolstoy Ploughing” (1887), “Tolstoy Resting in the Woods” (1891), and “Tolstoy Barefoot” (1891). All three of these canvases were on display this past summer in Moscow as part of a large Repin retrospective at the Novaia Tret’iakovka on Krymskii Val.

These images—in particular “Tolstoy Ploughing”—also play a central role in a small exhibit titled Repin: The Tolstoy Myth that has been running more or less concurrently, from June through mid-October, at the State Museum of L.N. Tolstoy in Moscow. One of the stated goals of this exhibit is “to deconstruct the myth of Tolstoy” that Repin promulgated and supposedly helped create. It doesn’t really do this, but it does provide interesting food for thought.

It also begs certain significant questions. To what extent was the “myth” of Tolstoy-as-peasant purveyed by Repin merely that—a myth? Was it, in fact, not a myth at all?  Tolstoy was no peasant, for sure, but the fact remains that he spent the better part of his adult life dressing like one. What was he up to?

In recent years scholars have suggested that Tolstoy subtly but assiduously sought to exert control over both his “myth” (Michael Denner) and the interpretation of his works (Justin Weir). The Repin paintings, however, are one instance where curatorial control seems to have escaped him. His ambivalence about how (and whether) to manage his image in connection with these paintings is revealing.

As the exhibit details, Tolstoy seems at first to have been comfortable enough with Repin’s unconventional decision to depict him outdoors, in his trademark belted peasant blouse, and he initially even granted the artist free rein to reproduce the ploughing image.

But he quickly had second thoughts, claiming (prophetically, it turns out) that all the attention might invite derision or “abuse” (bran’). At this juncture N.N. Strakhov stepped in to reassure him: “It’s an altogether simple matter. The fact that you plough—they already know this in Russia, in Europe, in America. That Repin decided to paint you this way is the most natural thing possible—what else is an artist to do? Could he chose anything better?” This was all true enough: Tolstoy had dreamed of “crossing over to the peasantry” since the 1850s, and by the 1890s, when he was already a celebrity, plenty of people were well aware of his odd habit of mimicking and working with his peasants—not least because he had featured it prominently (albeit fictionally) in Anna Karenina.

Disinclined to offend Repin, whom he liked, Tolstoy acquiesced: “I veto my veto,” he graciously announced to Strakhov. He would soon have reason to regret this. Within a decade the image of the “great ploughman” or velikii orataiushka—as the usually very reverent Repin irreverently tagged his famous acquaintance in his memoirs—was adorning various distinctly un-Tolstoyan accoutrements of bourgeois life such as candy wrappers (“Yasnaya Polyana caramel”) and eau-de-cologne bottles (one can only wonder what a Tolstoy-inspired “after plough” cologne smelled like!). The exhibit at the Tolstoy museum displays a number of these amusingly incongruous knickknacks.

If the chintzy co-optation and commodification of his life-long efforts to simplify himself irked the increasingly ascetic Tolstoy in his old age, we have no record of it: he seems to have said nothing on this score, at least publicly. This silence may at first flush seem strange, but it turns out to be characteristic.

It is true that he objected, privately, to being painted by Repin in bare feet, quipping that “The next thing you know they’ll depict me with no pants on,” which in fact soon came to pass: in 1903 a bucolic travesty by a certain Narkiz Bunin, showing Tolstoy front and center, Repin, and Chekhov, all in peasant blouses and nothing else, out netting fish along a river, caused a brief uproar in St. Petersburg (Denner explores this curious episode in delicious detail).

But overall—even in the face of the irony, bemusement, and “bran’” that he met from various quarters—Tolstoy was remarkably reticent about his perverse self-fashioning as a peasant: nowhere does he directly explain, justify, or interrogate this impulse. It is as if this curious biographical fact were simply a given—an immutable, involuntary component of his being that did not brook analysis. Tolstoy’s own silence about this behavior worked to preserve and even accentuate its strangeness.

Rather than commenting on what he did, Tolstoy redirected any reflections, emotions, and intuitions regarding this matter into his fiction, where he does in fact explore—obliquely, yet abundantly and potently—the many questions that his class-bending proclivities raise. The most striking example of this is in Anna Karenina, where Tolstoy encodes himself, incognito, in Anna’s psyche in the form of the grotesque, French-speaking muzhik who haunts her dreams.

Strakhov soothingly suggested that nothing could be more “natural” than Tolstoy behind the plough. But this remark—and certainly the multitude of mass-produced candy-wrapper images that Repin’s painting spawned—smoothed over and normalized behavior that was hardly normal. While his life-long dream of transcending or erasing class lines and “crossing over to the peasantry” was at root idealistic and utopian, Tolstoy seems to have been well aware that what he did surprised and at times even unnerved people. In his art—as in his life—Tolstoy actively provoked what Majorie Garber calls “category crises: “a failure of definitional distinction, a borderline that becomes permeable, that permits of border crossings from one (apparently distinct) category to another.” His propensity for moving into these kinds of border zones is at the heart of his power to disturb and destabilize.

The exhibit at the Tolstoy Museum gives a prominent place to Repin’s final, posthumous portrait of Tolstoy, which was especially restored for the occasion. It is not hard to understand why “Tolstoy the Other Side of Life” languished for so many decades in storage: it is at once cloyingly sentimental and oddly creepy, with a slightly Zombie-ish Lev Nikolaevich, dressed as always in his peasant blouse, gazing heavenward with a sort of Renaissance-Italianate piety, but also looking as if he has a severe case of pinkeye.

It’s not great art, for sure, but Repin’s intuitions were perhaps not entirely off the mark: he serves up an appropriately disconcerting and liminal Tolstoy—one who is standing, emblematically and ambiguously, at the ultimate border crossing.

That said, it’s just as well that the image didn’t make it onto any candy wrappers. Tolstoy, over there on the other side of life, was no doubt relieved.