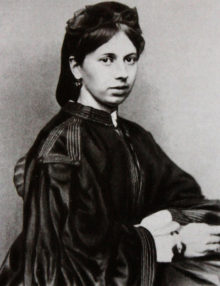 There are various origin stories of Anna Karenina, but the only one that pans out is the grisly real-life incident that occurred at the Tolstoys’ local train station. “The fourth of this January [1872] at 7 in the evening an unknown young woman, well dressed, arriving at the Yasenki Moscow-Kursk railway in Krapivensky County, walked up to the rails at the time of the passing of the freight train number 77, crossed herself and threw herself on the rails under the train, and was cut in half. An enquiry has been made about the incident.” (The biographer Nikolai Gusev quotes this news story from the 8 January 1872 Tula Provincial Gazette. The Russian calendar was twelve days behind the Western one in the nineteenth century.)

Tolstoy and his wife Sofia knew the “unknown young woman” of the news article. It was Anna Stepanovna Pirogova, the thirty-five-year-old mistress and housekeeper of one of the Tolstoys’ closest neighbors, Aleksandr Nikolaevich Bibikov, a forty-nine-year-old landowner and widower.

Sofia soon wrote her sister Tatyana Kuzminskiy about the incident. Tatyana had spent many months at the Tolstoys’ Yasnaya Polyana estate:

You remember, at Bibikov’s, Anna Stepanovna? Well, that Anna Stepanovna was jealous of Bibikov for all the governesses. Finally, of the latest, she got so jealous that Aleksandr Nikolaevich got angry and quarreled with her, and the consequence of which was that Anna Stepanovna left him altogether and went to Tula. For three days she was lost to sight; finally in Yasenki, on the third day at 5 o’clock in the evening, she appeared at the station with a bag. There she gave her driver a letter to Bibikov; she asked him to get and bring her tea and gave him one rouble. Bibikov didn’t accept the letter and when the driver returned again to the station he found out that Anna Stepanovna had rushed under a car and the train crushed her to death. Of course she did this on purpose. The investigators came … and they read this letter. In the letter it was written: ‘You are my killer; you will be happy with her if murderers can be happy. If you want to see me, you can view my body on the rails at Yasenki.’ What a story! For a few days we’ve been going around like crazies, getting together and explaining it. Bibikov is quite calm, Levochka says, and that his nerves are strong, he’ll get by. Levochka [Sofia’s pet name for her husband] and Uncle Kostya went to look when they did the autopsy.

Sofia didn’t see this event as a tragedy, and apparently neither did her husband until he had written several drafts of the beginning of the novel. Recall again the end of Anna Karenina … When that Anna dies, all the characters would have been writing their friends and relatives about it. The source for Sofia’s gossipy recounting of the event seems most likely to have been her husband.

Tolstoy was sensitive and impressionable, but if a war, a guillotining, an autopsy or a famine was happening nearby, he wanted to see it for himself. He never wrote about or was quoted speaking about Pirogova’s suicide, but Sofia, in addition to letters to her sister, noted in her diary: “Lev Nikolayevich saw her, with her head crushed, her body naked and mutilated, in the Yasenki barracks. He was terribly shaken. He had known Anna Stepanovna as a tall, stout woman, Russian in face and character, a brunette with grey eyes, not beautiful but attractive.” (Why this description does not appear in The Diaries of Sophia Tolstoy, I don’t know. It appears in Reminiscences of Lev Tolstoi by His Contemporaries, translated by Margaret Wettlin.)

When Anna Karenina makes her first appearance in the novel, in a scene Tolstoy wrote two years later, she dazzles us and Vronsky as she exits her train in Moscow (all translations by Constance Garnett):

Vronsky followed the guard to the carriage, and at the door of the compartment he stopped short to make room for a lady who was getting out.

With the insight of a man of the world, from one glance at this lady’s appearance Vronsky classified her as belonging to the best society. He begged pardon, and was getting into the carriage, but felt he must glance at her once more; not that she was very beautiful, not on account of the elegance and modest grace which were apparent in her whole figure, but because in the expression of her charming face, as she passed close by him, there was something peculiarly caressing and soft. As he looked round, she too turned her head. Her shining gray eyes, that looked dark from the thick lashes, rested with friendly attention on his face, as though she were recognizing him, and then promptly turned away to the passing crowd, as though seeking someone. In that brief look Vronsky had time to notice the suppressed eagerness which played over her face, and flitted between the brilliant eyes and the faint smile that curved her red lips. It was as though her nature were so brimming over with something that against her will it showed itself now in the flash of her eyes, and now in her smile. Deliberately she shrouded the light in her eyes, but it shone against her will in the faintly perceptible smile.

Before we even know that she is, in fact, Anna Karenina, the novel’s namesake — appearing only now, in the eighteenth chapter — she has completely attracted our attention. She has come from St. Petersburg to try to salvage her brother Stiva Oblonsky’s marriage. The first of two inquests in the novel occurs minutes after her fateful introduction to Vronsky:

A guard, either drunk or too much muffled up in the bitter frost, had not heard the train moving back, and had been crushed.

Before Vronsky and Oblonsky came back the ladies heard the facts from the butler.

Oblonsky and Vronsky had both seen the mutilated corpse. Oblonsky was evidently upset. He frowned and seemed ready to cry.

Vronsky did not speak; his handsome face was serious, but perfectly composed.

“Oh, if you had seen it, countess [that is, Vronsky’s mother],” said Stepan Arkadyevitch. “And his wife was there. … It was awful to see her! … She flung herself on the body. They say he was the only support of an immense family. How awful!”

Stepan (“Stiva”) Arkadevich Oblonsky is as sensitive here as the author, who often responded to overwhelming moments with tears. Stiva’s sensitivities, however, don’t last, as Tolstoy’s evidently did. By the end of the chapter, Stiva has shaken off the horror as easily as water off a duck’s back; he’s got his own problems, after all, which are the reason Anna has come to his rescue. But Anna, the elegant, composed, ever-conscious, strikingly beautiful heroine, is unnerved. Though she didn’t witness the guard’s death, she can imagine it:

Madame Karenina seated herself in the carriage, and Stepan Arkadyevitch saw with surprise that her lips were quivering, and she was with difficulty restraining her tears.

“What is it, Anna?” he asked, when they had driven a few hundred yards.

“What nonsense!” said Stepan Arkadyevitch. “You’ve come, that’s the chief thing. You can’t conceive how I’m resting my hopes on you.”

Anna’s brother has the tact to change the subject. But she feels (and those of us who have read the novel know) that it is indeed an evil omen. Even if the incident recedes from Anna’s consciousness, Tolstoy has wound up a clock whose ticking we can almost always sense.

The other inquest is accounted for in the epilogue, Part 8, when Vronsky and Stiva, united again at a train station, recall the aftermath of her death:

For an instant Stepan Arkadyevitch’s face looked sad, but a minute later, when, stroking his mustaches and swinging as he walked, he went into the hall where Vronsky was, he had completely forgotten his own despairing sobs over his sister’s corpse, and he saw in Vronsky only a hero and an old friend.

Tolstoy has become so disenchanted with Oblonsky, four years into composing the novel, that he unfairly and unbelievably represents Stiva’s experience of Anna’s suicide as superficial. But we readers are more fair to Stiva than his author. We know Stiva loved and appreciated his sister. He would not forget his grief nor would he have been able to dissociate Vronsky from her fate, especially as her fate has now determined Vronsky’s: a hell-bent mission to fight in Serbia. (Stiva does have his faults. But at worst, he resembles Aleksandr Bibikov, the Tolstoys’ neighbor. “There’s nothing new with us,” Sofia wrote her sister Tatyana, less than four months after Anna Stepanovna Pirogova’s suicide, “besides that Bibikov married that same German woman over whom Anna Stepanovna killed herself.”)

Vronsky, for his part, experiences a double-dose of suffering. Vronsky has a bad toothache (as had Tolstoy at various times during the writing of the novel). Tolstoy delivers us into Vronsky’s two contrasting overwhelming pains:

He could hardly speak for the throbbing ache in his strong teeth, that were like rows of ivory in his mouth. He was silent, and his eyes rested on the wheels of the tender, slowly and smoothly rolling along the rails.

And all at once a different pain, not an ache, but an inner trouble, that set his whole being in anguish, made him for an instant forget his toothache. As he glanced at the tender and the rails, under the influence of the conversation with a friend he had not met since his misfortune, he suddenly recalled her—that is, what was left of her when he had run like one distraught into the cloak room of the railway station—on the table, shamelessly sprawling out among strangers, the blood-stained body so lately full of life; the head unhurt dropping back with its weight of hair, and the curling tresses about the temples, and the exquisite face, with red, half-opened mouth, the strange, fixed expression, piteous on the lips and awful in the still open eyes, that seemed to utter that fearful phrase—that he would be sorry for it—that she had said when they were quarreling.

And he tried to think of her as she was when he met her the first time, at a railway station too, mysterious, exquisite, loving, seeking and giving happiness, and not cruelly revengeful as he remembered her on that last moment. He tried to recall his best moments with her, but those moments were poisoned forever. He could only think of her as triumphant, successful in her menace of a wholly useless remorse never to be effaced. He lost all consciousness of toothache, and his face worked with sobs.

The dramatic “ending,” Anna’s death in Part 7 (followed by the epilogue known as Part 8), though almost endlessly rewritten by Tolstoy, right up to the galleys of the book edition, is not the book’s climax, but its origin. As soon as Tolstoy began the first draft in March of 1873, a draft radically different in scope, focus and tone from what the novel became, he knew the protagonist was going to kill herself. From a draft note written in the first week or two of his starting the novel: “She leaves the house and casts herself away.”

Tolstoy may have never mentioned Anna Pirogova’s suicide to anyone besides Sofia in its immediate aftermath, but writing Anna Karenina uncovered its resonances to him and thence to us, his readers. To his own irritation, frustration and depression, he would ultimately spend four years reconstructing the sequence of events that leads to Anna’s suicide.

Anna was an ultra-sensitive character who, like Tolstoy himself, seemed to others to have everything a person might need to be content. And yet for much of the period when he was composing the novel, Tolstoy was plagued by his own suicidal impulses.