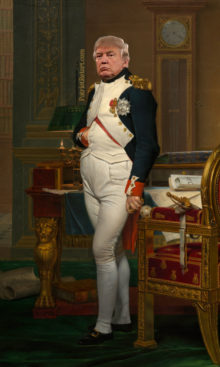 A version of this post initially appeared on The Conversation.

Comedian Aziz Ansari was inadvertently channeling novelist Leo Tolstoy when he claimed that “change doesn’t come from presidents” but from “large groups of angry people.”

In “War and Peace” (1869) Tolstoy insists that history is propelled forward not by the actions of individual leaders but by the random alignment of events and communities of people.

The unexpected electoral victory of Donald Trump last November was a political surprise of seismic proportions, shocking pollsters and pundits alike. Myriad explanations have been provided. Few are conclusive. But for those who disagree with his policies and feel powerless as this uncertain moment unfolds, Tolstoy’s epic novel can offer a helpful perspective.

The illusory power of an egomaniacal invader

Set between 1805 and 1817 – during Napoleon’s invasion of Russia and its immediate aftermath – “War and Peace” depicts a nation in crisis. As Napoleon invades Russia, massive casualties are accompanied by social and institutional breakdown. But readers also see everyday Russian life, with its romances, basic joys and anxieties.

Tolstoy looks at events from a historical distance, exploring the motivations of the destructive invasion – and for Russia’s eventual victory, despite Napoleon’s superior military strength.

Tolstoy clearly loathes Napoleon. He presents the great emperor as an egomaniacal, petulant child who views himself as the center of the world and a conqueror of nations. Out of touch with reality, Napoleon is so certain of his personal greatness that he assumes everyone must either be a supporter or take pleasure in his victories. In one of the novel’s most satisfying moments, the narcissistic emperor enters the gates of conquered Moscow expecting a royal welcome, only to discover that the inhabitants have fled and refuse to pledge allegiance.

Meanwhile, the heart of a novel about one of Russia’s greatest military victories does not rest with Napoleon, Tsar Alexander I or the army commander, General Kutuzov. Instead, it rests with a simple, loving peasant named Platon Karataev who is sent to fight the French against his will.

But even though Platon has little control over his situation, he has a greater ability to touch others than the authoritarian Napoleon, who only sets a pernicious example. For example, Platon offers the motherless hero, Pierre Bezukhov, an almost feminine and maternal kindness and shows him that the answer to his spiritual searching lies not in glory and blistering speeches but in human connection and our inherent connectivity. Pierre soon has a dream about a globe, in which every person represents a tiny droplet temporarily detached from a larger sphere of water. Signifying our shared essence, it hints at the extent to which Tolstoy believed we are all connected.

The case of Platon and his spiritual power is only one example of the grassroots power of individuals in “War and Peace.” At other times, Tolstoy shows how individual soldiers can make more of a difference in the battlefield by reacting quickly to the circumstances than generals or emperors. Events are decided in the heat of the moment. By the time couriers return to Napoleon – and he boldly reasserts his conquering vision – the chaos of battle has already shifted in a new direction. He is too removed from the real lives of soldiers – and, implicitly, people – to really drive the course of history.

In depicting Napoleon’s campaign this way, Tolstoy seems to reject Thomas Carlyle’s “Great Man” theory of history – the idea that events are driven by the will of extraordinary leaders. Tolstoy, in contrast, insists that when privileging extraordinary figures, we ignore the vast, grassroots strength of ordinary individuals.

In a sense, this vision of history is appropriate for a novelist. Novels often focus on ordinary people who don’t make it into the history books. Nonetheless, to the novelist, their lives and dreams possess a power and value equal to those of “great men.” In this dynamic, there are no conquerors, heroes or saviors; there are simply people with the power to save themselves, or not.

So in Tolstoy’s view, it is not Napoleon who determines the course of history; rather, it’s the elusive spirit of the people, that moment when individuals almost inadvertently come together in shared purpose. On the other hand, kings are slaves to history, only powerful when they’re able to channel this sort of collective spirit. Napoleon often thinks he is issuing bold orders, but Tolstoy shows the emperor is merely engaging in the performance of power.

All of these ideas are relevant today, when many who did not vote for President Trump are concerned about how his campaign rhetoric is shaping his presidency and the country.

Obviously, the president of the United States has tremendous power. But here is where “War and Peace” can provide some perspective, helping to demystify this power and sort out its more performative aspects.

There’s quite a bit of action coming from the White House, with President Trump furiously signing one executive order after another before the cameras. It’s hard to say how many of these executive orders can go into immediate effect right away. Many – like the recent ban on immigrants from seven Muslim majority countries – are certainly affecting lives. But others will also require legislative and institutional support. We hear every day about government workers and departments, mayors and governors vowing not to follow President Trump’s orders.

While those who oppose Trump might not have philosopher peasants like Platon Karataev at their disposal, mass marches and protests broadcast united opposition – as do all the petitions, safety pins, pink pussy hats and rogue tweets. Some of this might be derided as #slacktivism. But collectively they map out tenuous networks of connections among individuals.

Thinking in essentialist terms, Tolstoy felt that Napoleon failed to destroy Russia because the collective interests of Russian people aligned against him: a majority of people – wittingly or unwittingly – acted to undermine his agenda. Is it possible that we will see a similar alignment of grassroots interests now? Could men, women, people of color, immigrants and LGBTQIA individuals make their voices heard against some of President Trump’s executive actions, which may threaten many on a personal level?

I can’t see Tolstoy wearing a pink pussy hat. But always a voice of defiance, he would have certainly approved of resistance.