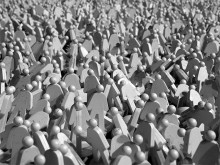 This essay originally appeared in Russian on gefter.ru

The annexation of Crimea most likely marks a new stage in the history of contemporary Russia, a stage whose meaning is still not entirely clear, but whose direction hardly inspires optimism.  We are witnessing a profound ideological and political shift, which is clear not only in the actions of the authorities, but in the discourse that has been so quickly developing in the media and official declarations. Here Putin’s “Crimea Speech,” delivered to them on March 18 in connection with the signing of the annexation agreement, is particularly revealing.  His rhetoric is not entirely new, but his speech establishes verbal formulas that we can expect to see repeated throughout the media.

Opposition intellectuals were particularly troubled by one of the last parts of his speech, which contained a clear allusion to themselves:”Some Western politicians are already threatening us with not just sanctions but also the prospect of increasingly serious problems on the domestic front. I would like to know what it is they have in mind exactly: action by a fifth column, this disparate bunch of ‘national traitors’, or are they hoping to put us in a worsening social and economic situation so as to provoke public discontent? We consider such statements irresponsible and clearly aggressive in tone, and we will respond to them accordingly.”

Propagandists like Dmitry Kiselev openly link “fifth column” with the defenders of peace and of the territorial integrity of Ukraine.  “National Traitors” is a newcomer to the political lexicon, but one can expect that peace activists will soon find this label applied to them.  In order to understanding what these terms mean, it makes sense to say a few words about the context in which they arose.

The expression “fifth column” belongs to the Franco’s General Emilio Mola, who told a journalist during the Spanish Civil War in 1936 that four columns of his troops were heading towards Republican Madrid, while a fifth column within the city awaited his signal to start its own attack.  In the broadest sense, a fifth column is a group of provocateurs, combatants, or panic-mongers, all ready to rebel against the lawful authorities.  Such a concept would best be applied to the “polite green men” in Crimea or the Russian rioters sent to Eastern Ukraine.  But instead it is used against pacifists who protest against violence.  Thus calling for peace is equated with an armed provocation or even an uprising.

The same can be said about the notorious “national traitors.”  This term appeared in Weimar Germany, and was applied to Matthias Erzberger, Philipp Scheidemann  and other members of the German delegation who signed the armistice of 1918 and the Treaty of Versailles.  The meaning of the expression is clear.  It’s a name for collaborators, for people who cooperate with an occupational regime.  This term was used for Petain’s followers in France and for the Vlasovites in Russia.  It would probably be appropriate for Mayor Aksyonov in Crimea.  But who are the occupiers with whom Russian pacifists are collaborating?  If we’re talking about Americans, then we must first admit that Russia has already been occupied by them.

According to Klemeper, a key element of totalitarian speech is the inversion of subject and predicate:  the victim is actually the torturer, or the Nazis are defending themselves against aggression.  Moreover, totalitarian speech usually includes “new” terms whose definition has only been partially understood, imbuing them with the exact opposite meaning.

What’s crucial here is the separation of signifier and signified, the extreme oversimplification of concepts and their ultimate loss of any clear meaning.  Their historical content is replaced by a vague notion laden with emotional overtones, like, for example, in the phrase “national traitor.”  Here the understandable and intensely negative word “traitor” is associated with the idea of both the nation and Nazism at the same time.  But that’s the point of this usage.  In The Crowd: A Study of the Popular Mind(1896) Gustave Le Bon, who was admired by Goebels and studied by Lenin, wrote,

Whatever be the ideas suggested to crowds they can only exercise influence on condition that they assume a very absolute, uncompromising, and simple shape. They present themselves then in the guise of images, and are only accessible to the masses under this form. These image-like ideas are not connected by any logical bond of analogy or succession, and may take each other’s place like the slides of a magic-lantern which the operator withdraws from the groove in which they were placed one above the other. This explains how it is that the most contradictory ideas may be seen to be simultaneously current in crowds. According to the chances of the moment, a crowd will come under the influence of one of the various ideas stored up in its understanding, and is capable, in consequence, of committing the most dissimilar acts. Its complete lack of the critical spirit does not allow of its perceiving these contradictions.

This logical inconsistency is perhaps the main feature of Putin’s speech.  On the one hand, this speech is a declaration of the annexation of part of Ukraine; on the other hand, it contains statements that are completely incompatible with the matter at hand:   “We want to be friends with Ukraine and we want Ukraine to be a strong, sovereign and self-sufficient country.<…> Most importantly, we want peace and harmony to reign in Ukraine, and we are ready to work together with other countries to do everything possible to facilitate and support this.”

But if we are so concerned about Ukrainian sovereignty, then why we did we grab Crimea?  It turns out that Russia didn’t annex Crimea; it saved it from annexation by someone else: “We have always respected the territorial integrity of the Ukrainian state, incidentally, unlike those who sacrificed Ukraine’s unity for their political ambitions. They flaunt slogans about Ukraine’s greatness, but they are the ones who did everything to divide the nation.” But if someone is violating our neighbor’s territorial integrity, then why did Crimea end up with us? ” And this strategic territory should be part of a strong and stable sovereignty, which today can only be Russian. Otherwise, dear friends (I am addressing both Ukraine and Russia), you and we – the Russians and the Ukrainians – could lose Crimea completely, and that could happen in the near historical perspective”.

In other words, Russia is annexing Crimea so that it won’t be annexed by some unknown party, thereby saving it for the Ukrainians.  Otherwise, the peninsula could just vanish without a trace.

If you read the speech for content, it becomes nonsensical.  Hitler had called himself “the most conservative revolutionary in the world.” Through repetition, this meaningless oxymoron took on something almost like a meaning.  But it is the destruction of meaning that is the goal of totalitarian discourse, even as it constantly asserts its metaphysical dedication to truth and frankness: “They are constantly trying to sweep us into a corner because we have an independent position, because we maintain it and because we call things like they are and do not engage in hypocrisy. ”

As senseless cliches about an amorphous enemy multiply, speech ceases to signify. Cut off from reality, it begins to form a second, verbal reality, sort of like the one created by the newspapers and television in Soviet times.  Those were the days when “the people and the party were one” and “our goal [was] communism”.  Signifiers start to run wild.   Words lose their meaning.  Anyone can be called a fascist or a bandit.

Jean-Pierre Faye saw that totalitarian speech speech infiltrated German reality at precisely the moment of serious economic crisis, leading to a crisis of speech.  Its primary task is to separate speech from reality, a test it passes with flying colors..   Such an isolation of meaning from reality first and foremost is needed for the total mobilization of society that is so often a reaction to a crisis.  Putin the Sequel is no longer the apologist of stability; rather he has suddenly turned into an agent of the very destabilization, without which total mobilization would be impossible.  Such mobilization requires the suppression of reason and the transformation of speech into emotional frenzy.

Ernst Junger wrote that the extreme form of total mobilization can be reached only “when the image of martial operations is prescribed for conditions of peace.. <…> In this regard, we can introduce examples such as the increasing curtailment of “individual liberty,” a privilege that, to be sure, has always been questionable. Such an assault takes place in Russia and Italy and then here in Germany; its aim is to deny the existence of anything that is not a function of the state. We can predict a time when all countries with global aspirations must take up the process, in order to sustain the release of new forms of power.”.

Mobilization as a form of mass leadership foregrounds the idea of an almost mystical national unity, as we can hear in Putin’s speech: ” We were closer than ever over these days, supporting each other. These were sincere feelings of solidarity. It is at historic turning points such as these that a nation demonstrates its maturity and strength of spirit. The Russian people showed this maturity and strength through their united support for their compatriots.”. The individual disappears within the masses and loses all critical consciousness.  At the same time we have the idea of a particular “historical turning point” which, as Klemperer notes, tends to raise any event to historical or world-historical significance (Klemperer calls this “intensification”).

In order to be effective, totalitarian discourse must reign supreme in the media and must drown out any other voices.  Only then can it turn the masses into interchangeable idiots.  It is ideally constructed for television, which sets the masses in front of the screen while their heads with the same thing over and over.  Fortunately, however, we do not live in Nazi Germany or the USSR.  Organizing a total purge of the media in the name of such a discourse is impossible.  Putin and Kiselev’s “fifth column” is, as we all know, Internet users who undercut the effectiveness of propaganda through diverse  points of view and varied information sources.  The fact that the annexation of Crimea hasn’t been welcomed by all of Russian society is a sign of the changing media situation.  In another five to ten years, the totalitarian discourse practiced by the authorities today will no longer be effective.  I think the great Eurasian project will end at the same time as the supremacy of television.

—Translated from the Russian by Eliot Borenstein