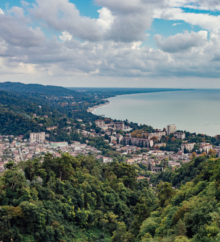 Tamta Gelashvili is a PhD Student at the Institute of Political Science, University of Oslo, and a Researcher at the Norwegian Institute of International Affairs, Oslo, Norway.

Professor Pål Kolstø is Professor of Russian Studies at the Department of Literature, Area Studies and European Languages, University of Oslo, Norway.

Dr Nino Kemoklidze is a Senior Lecturer in International Relations at the University of Chichester, UK and teaches Conflict Prevention and Transformation at the Open University of Catalonia, Spain.

Dr Helge Blakkisrud is a Senior Researcher at Norwegian Institute of International Affairs, Oslo, Norway, and the Editor-in-Chief of Nordisk Østforum, a Nordic journal for East European and post-Soviet studies.

Does trade really foster trust? In the case of conflict-torn regions, developing trade links is often believed to contribute to transforming conflict or even facilitate peacebuilding. However, when it comes to de facto states—states with no or limited international recognition—the relationship between the two may not be quite as straightforward.

A closer look at Abkhazia, a de facto state in the contested neighborhood between Russia and the EU, shows that trade can thrive even in a post-conflict situation where mutual distrust is high. However, as long as trade occurs informally and in the shadows, it does not help in building trust at the state level.

In general, de facto states have limited opportunities to engage with the outside world. For Abkhazia, which is currently recognized only by a handful of states (Nauru, Nicaragua, Russia, Syria, and Venezuela), the sole realistic option for getting involved in formal, legalized trade is with Russia. In 2008, in the aftermath of the Russo–Georgian war, Russia became the first state to recognize Abkhazia. Today it is Abkhazia’s most important trading partner by far (see Fig. 1).

The “Other” category includes more than 40 states, the most important being Armenia, Brazil, Italy, Ukraine and Belarus.

However, this economic interaction does not necessarily translate into high levels of trust. Although Abkhazia sees no real alternative to Russia, the fundamental asymmetry in size and economic power means that there is always the risk that the Abkhazian economy—and with it, the entire de facto state—may simply be swallowed up by Russia. If Russian companies were allowed free access, the Abkhazian de facto leadership fears that, at the very minimum, they would monopolize the most lucrative sectors of the economy.

From a Russian perspective, the fact that Abkhazia is dragging its feet over opening the economy to Russian direct investment demonstrates a lack of gratitude for Russia’s recognition, security guarantees, and generous economic assistance. Despite the extensive economic interaction and Abkhazia’s absolute dependence on the Russian market for export as well as import, neither side has displayed high levels of trust.

As for Abkhazia’s relationship with Georgia, the state from which it has sought to formally secede, it might seem logical that the history of conflict and post-war economic blockade would lead to low levels of trust and/or trade between the two. Indeed, Abkhazia considers all commercial goods entering from Georgia proper as contraband. Similarly, Abkhazian businesses are not allowed to export goods to Georgia—except for hazelnuts, a major Abkhazian cash crop, whose export was legalized in 2015.

Georgia in turn prohibits any economic activity taking place on Abkhazian soil without explicit prior approval and appropriate permits issued by Tbilisi. This also pertains to transit. In cases where international companies have tried to circumvent such regulations, Georgia has responded with loud protests and countermeasures.

Moreover, for a long time, Georgia did not recognize any paperwork issued by the Abkhazian de facto authorities—thus, no goods produced in Abkhazia could legally enter the Georgian market. In 2018, Georgia unveiled a new initiative, “A Step to a Better Future,” aimed, inter alia, at facilitating trade as a way to engage the de facto state. The Abkhazian response was at best lukewarm: due to deep-rooted distrust of Tbilisi and its intensions, the de facto state authorities were not willing to consider the initiative seriously.

Given this fundamental lack of trust between Tbilisi and Sukhum/i and the mutual restrictions on trade, we would expect economic interaction to be very limited. In fact, however, informal trade between Georgia and Abkhazia has been thriving for years. Pre-Covid-19, Abkhazian de facto authorities reported an estimated 150 tons of commercial cargo moving in and out across the administrative borderline every day, with an annual value of 7 to 15 million USD.

This vibrant informal trade contributes to building trust on the societal level—but not at the state level. Legalizing trade would appear mutually advantageous. However, Abkhazia has insisted on participating in trade as an independent state—whereas Georgia sees Abkhazia as an integral part of its territory, temporarily outside the central government’s control. Both sides are very cautious about taking any steps that could be perceived as a concession on the status issue, not least since this would probably backfire at home, triggering protests from the opposition and the general public alike.

When it comes to trade beyond Russia and Georgia, Abkhazia’s options are limited. The most important trading partner here is Turkey (see Fig. 1), thanks to the sizable local ethnic Abkhazian diaspora. The Abkhazian de facto authorities also report that trade with individual EU states has been growing in recent years. However, this trade has to rely on Russian and Georgian middlemen, which easily doubles the cost of doing business.

The only feasible way for Abkhazian exporters to access European markets directly would be through inclusion in Georgia’s Deep and Comprehensive Free Trade Agreement (DCFTA) with the EU. In fact, there is a precedent for this in Transnistria’s inclusion in Moldova’s DCFTA with the EU. In 2017, the EU started exploring possibilities for extending the DCFTA to include Abkhazian businesses. However, the status issue has blocked any breakthroughs in this direction as well.

Abkhazia’s economic interactions with Russia, with Georgia proper, and with the EU demonstrate that the interrelation between trade and trust is more complex than often assumed. Trade does not necessarily promote trust, but may thrive even under conditions of mutual distrust.