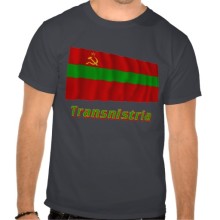 Kathryn David is a research assistant at the Holocaust Museum, and was a 2012 Fulbright recipient in Ukraine

The unresolved nature of the collapse of the Soviet Union is nowhere more apparent than in the various “disputed territories” that dot the post-Soviet space. Some of these territories have been the sites of serious violence and ethnic conflict including South Ossetia and Abkhazia (between Russia and Georgia) and Nagorny Karabakh (between Armenia and Azerbaijan). Recently, I got a chance to visit one of the more peaceful of these territories, a land caught between its Soviet past and independent present.

The territory went from part of the Soviet Union to part of an independent state during the chaos of border changes around the fall of the Soviet Union. Yet many of the territory’s residents still considered themselves part of Russia. After living in the Soviet Union their whole lives, living in a new state also meant citizens were presented a new narrative of national history emphasizing a cultural past separate from Russia. Many found themselves at a loss when the official language of their country was no longer Russian and became a language they did not understand. Thus, amidst violence and protest they broke off from their new state and declared themselves a part of Russia.

This narrative is all too familiar if you’ve been paying attention to Russia’s annexation of Crimea. However, I’m not talking about Crimea. I’m talking about Transnistria, the breakaway republic from Moldova. What can Transnistria teach us about Russia’s actions against Ukraine?

“It remains… one of the most complicated conflicts on the post-Soviet scene, both in terms of its prehistory, its political constellations and its possible future developments, “ write Pal Kosto, Andrei Edemsky, and Nataliya Kalashnikova in their article on the conflict for the journal, Europe-Asia Studies.

Transnistria declared itself independent from Moldova in 1990, before Moldova itself had declared its own independence. Transnistria finds the rationale for declaring itself separate based on a view that the cultural heritage and history of its people are separate from the rest of Moldova. As Kosto et. al explain, when the principality of Moldova was effectively split between Romania and the Russian empire in the 19th century, parts of the territory came under Romanian governance and cultural influence while the parts across the Dniester River (hence Transnistria) came under the influence of the Russian empire. Drawing upon this historical narrative, Transnistria split from Moldova, resulting in a war that left hundreds dead and wounded.

However, the authors argue that the separation is not an ethnic conflict:

It would be a gross oversimplification to present the conflict as a showdown between the ethnic Moldovan and the Russian-speaking part of the Moldovan population. Although the mass media have regularly referred to the war as an ethnic conflict, neither side agrees to this description. Both insist that it is political in character… At the same time, the ethnic dimensions cannot be denied altogether. Russians, and to some extent Ukrainians, are overrepresented in the PMR [Transnistria] leadership… and the post-Communist Moldovan government in Chisinau was composed almost exclusively of ethnic Moldovans.

Sound familiar? This description applies in many ways to Crimea. There is one key difference, however. While Transnistria enjoys political and economic support from Russia, their movement to secede was not orchestrated by the Russian government. There was neither a sham referendum nor a subsequent annexation. Crimea represents a new, more daunting chapter in the organization of the post-Soviet space: Russia is now calling the shots.

None of the former Soviet territories exist in a vacuum and any declaration of independence or separatism will always involve the support or condemnation of more powerful and influential actors. Yet, the brazen-ness of the annexation of Crimea compared to the subtle support of breakaway territories like Transnistria shows how much Russia’s policies have shifted in the past 20 years.

The Moldovan Ambassador to the United States voiced his concern about Russia’s actions in a recent NPR interview:

We are watching every step that they are doing in that region. We still consider Transnistria as a part of the republic of Moldova. So, we are watching carefully and we are prepared to take any kind of counter-steps in this regard. We are trying to get attention of our Russian counterparts to keep a dialogue. But we want to make sure that our path to Europe is very much clear and understood by Russia.

It is clear that the annexation of Crimea goes against international norms. Yet, the post-Soviet space has never been “normal.” With Russia taking a more active role, even the fragile standards of the region are being called into question.