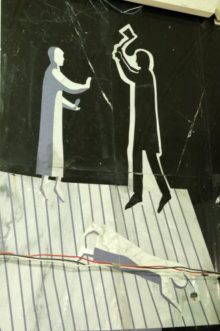 This is the first in a series of posts organized by the North American Dostoevsky Society.

Sarah Hudspith is an Associate Professor in Russian at the University of Leeds. Her book, Dostoevsky and the Idea of Russianness, was published in 2004. She is co-director of the Leeds Russian Centre and manages Dostoevsky Now, a public engagement project for exploring Dostoevsky in the world today through events, discussion and online resources. She tweets on @SarahHudspith.

When Katia Bowers first approached me to take part in the #CP150 Twitter project, I was very excited. As an undergraduate student, my first experience of Dostoevsky had been Crime and Punishment: it was an experience that began a life-long love affair, but it also put paid to a hidden dream – to write fiction myself. For how could I possibly write a novel that would ever come close to Dostoevsky’s? Now, I was being offered the chance to (re)write a part of that very novel myself, to put myself almost into Dostoevsky’s shoes and to experience the creation of a new kind of Raskolnikov. How could I refuse?

When I learned that the parts of the novel would be divided between the contributors, I also knew straight away which part I wanted to cover: the first part, in which the murder takes place. On the one hand it was quite a daunting responsibility to draw out of the text (in Oliver Ready’s masterful translation) the voice needed to attract followers to the beginning of the story. But on the other hand, I felt that Part One presented the most fascinating challenges that might have a contemporary relevance: how might a murderer use social media to reflect on his/her crime, in the run-up to it and its immediate aftermath? We live in an age where many people feel compelled to broadcast their lives online, to create a narrative of themselves which can become more real than the intimate, offline self. Raskolnikov is a character searching for an identity for himself: is he an intellectual, a philanthropist, a pioneer of a new morality, a sensualist, a beloved son and brother, a criminal? What parallels could be drawn between his anguished self-seeking, when put into the context of a Twitter account, and the contemporary mediation of personal identity? Further, social media are increasingly platforms for the propagation of ideologies and their distillation into ever more extreme forms, indeed are sadly the venue for publicising horrific crimes in the name of a so-called ‘new word’. The idea of a Twitter account for Raskolnikov presented intriguing issues around the interface between public and private and brought them into clearer focus for me.

The public/private question arose quite quickly when considering how much @RodionTweets should say about the murder, assuming a natural desire not to be found out, which is (despite moments to the contrary) Raskolnikov’s attitude in the novel. I reflected on how much of Part One Raskolnikov spends wandering the streets of St Petersburg, talking aloud to himself, seemingly unconcerned or at least oblivious as to whether he is overheard, and I felt this could be equated to the contemporary tendency to ‘talk’ to social media, almost forgetting its very public nature. So for me, Twitter became the medium via which I imagined Raskolnikov talking ‘aloud’ to himself, and it became natural to tweet, for example, Raskolnikov’s full realisation of the ugly horror of his intention: “God! Will I really actually take an #axe, start bashing her on the head, smash her skull to pieces? Will I really slip in sticky warm blood?” Although Raskolnikov asks himself these kinds of questions, openly and unguardedly away from the privacy of his garret room, it is not tantamount to a public confession, an admission of the responsibility for taking human life. That comes much later.

Allied to this question was the problem of spoilers. One aim of the project is to bring new readers to Dostoevsky; how much should we give away? Dostoevsky originally conceived of Crime and Punishment as written in the first person, but eventually switched to a third person narration which allowed him greater control over the development and revelation of Raskolnikov as a character, contextualising his thoughts with flashbacks and memories. A Twitter account, on the other hand, is as relentlessly linear as real life lived minute by minute. But I reasoned that since first-time readers of the novel would experience it as a ‘why-dunnit’ rather than a ‘who-dunnit’, knowing all along that Raskolnikov was the murderer, then the Twitter account should be the same.

In a sense, the project has created the first person version of the text that Dostoevsky ultimately rejected, and this meant that we would lose those parts of the text governed by the impersonal third person narrator, namely when Raskolnikov is acting, rather than simply thinking or talking to himself. One challenge was whether to fill those gaps, and how to do so. I was wary of straying from the text, and I was mindful of the brief to think about when Raskolnikov might realistically be tweeting: for example, he would not be tweeting whilst in conversation with Razumikhin, but might tweet his thoughts about the conversation after the fact. Nevertheless, there were times when I felt there would be a loss of suspense, particularly during Raskolnikov’s frantic last-minute preparations for the murder, if @RodionTweets went silent. The prospect of being able to put words into Raskolnikov’s mouth was thrilling, but those words had to be chosen carefully to fit with the tweets based more closely on the text. Thus, I considered it plausible for @RodionTweets to beg the ether: “Where can I get an #axe at this time of day!”

The use of hashtags was encouraged, and though this might seem the most anachronistic aspect of the conceit of translating a 19th-Century character into a 21st-Century medium, I found that it helped to highlight an important part of Dostoevsky’s conception for Raskolnikov. At the earliest stages of envisaging the novel, he described in a letter to the editor Katkov his plan to write a story about a young man falling under the influence of “strange, ‘unfinished’ ideas afloat in the atmosphere” and committing a murder. I saw that the use of hashtags created a certain emphasis when added to words, and I felt that this would nicely suggest ideas and concepts afloat in the Twittersphere that were preying on Raskolnikov’s mind, even at an unconscious level. In this way, I could highlight the obvious #crime, but also #soul, #sacrifice, #fate and even #deadbody, adding a possibility of a double reading to the exclamation “Over my #deadbody!”

It has been tremendously rewarding to take part in this collaborative project. I did not expect at first that to do so would generate fresh perspectives on the novel, and I have been very satisfied at the way it has enhanced my understanding of the text. I look forward to the insights that will arise from the tweets pertaining to the remaining parts of the novel, and I hope that readers and Twitter followers will find it equally engaging.

This is part of a series of posts on the experience of creating @RodionTweets. You can follow the Twitter account here. More information about the #CP150 project can be found here.