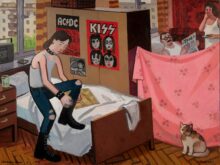 Alex Moshkin is a Fellow at the Frankel Institute for Advanced Judaic Studies at the University of Michigan, working on the project Migration and Translation: Contemporary Russian-Israeli Poetry.

Last term, I taught the first-year seminar “Utopia Interrupted: Late and Post-Soviet Literature and Culture” at the University of Toronto. When I was designing the course, my main goal was to foreground the diversity of voices and forms of difference of Soviet and post-Soviet literature and culture that is often missing from Slavic Studies courses in North America, which are typically dominated by a focus on “great” male authors like Tolstoy, Dostoyevsky and Nabokov, patriarchal political figures like Stalin and Putin, and a disproportionate spotlight on Russia at the expense of other regions that are amalgamated, for better or worse, under the tent of Slavic Studies, such as Eastern and Central Europe, the Caucasus, and Central Asia.

To redress this imbalance, I wanted to venture beyond traditional Russian literature courses by incorporating works by Jewish, Ukrainian, Central Asian, queer, female, and guest-worker authors, who are routinely excluded from surveys of Russian literature. For instance, in the unit on Central Asia, we read Chingiz Aitmatov and watched the short film Abduction (2018) on the practice of bride kidnapping in Kyrgyzstan; in the week on the post-Soviet diaspora, we read transnational poetry and prose by Russian-Jewish artists who settled in Israel in the 1990s, and hosted one of these artists—the acclaimed poet Rita Kogan—in class via Zoom; in the section on feminism, we grappled with issues of domestic violence and fantasies of revenge in the poetry of Lida Yusupova and Oksana Vasyakina; and in the unit on migrant workers, we discussed the largely overlooked realities of labor migrants in contemporary Russia, the second largest destination of guest workers in the world after the United States, via the Oscar nominated film Ayka (2019).

Since issues of power, representation, and inequality played such an important role in the course, I wanted to structure the assignments in a way that would reflect these essential issues. Therefore, instead of asking students to produce conventional papers that would be read by just one person, I wanted to do something different. After teaching students some hands-on skills on how to edit and add new content to Wikipedia, for their final projects I asked them to research and compose brand new Wikipedia entries on contemporary Russophone writers and artists from Kyrgyzstan, Kazakhstan, Uzbekistan, Latvia, Ireland, Israel, Canada, and Ukraine. So we reached an equilibrium. In the classroom, we pushed the boundary of canonical Russophone literature by studying works commonly excluded from surveys of Russian literature, while at home students were increasing the exposure of Russophone authors from “peripheral” locations (if we take Moscow as the Greenwich Meridian of global Russian culture) among English speakers and increasing the scope of Wikipedia’s uneven coverage of Russian culture and society.

The idea behind this final project—with full acknowledgement to Professor Melissa Weininger from Rice University for introducing me to Wiki Education Foundation—was sparked by a realization of how little reliable information is available on contemporary Russophone culture and society in English, both on and off Wikipedia. I was shocked that even prominent poets like Shamshad Abdullaev, Polina Barskova, Eugene Ostashevsky, and Alexander Skidan do not have Wikipedia entries in English and, as a result, remain unknown to English speakers who rely on Wikipedia as an increasingly foundational information source. As a way of addressing this imbalance, I asked the students to pick a single contemporary artist (from a list of possible options) and spend the semester researching their biographical trajectory and cultural significance. Throughout the course, we discussed possible reasons for their absence from Wikipedia and relative invisibility in the west. At times, we attributed this to the authors’ peripheral geography vis-à-vis Moscow; at other times, to the deliberately difficult formal experimentations of their writing; and finally, to the weak position of poetry in the book market in Russia and around the world.

Since “Utopia Interrupted” was a writing-intensive seminar, Wikipedia proved an especially fitting platform for teaching students about plagiarism and how to compose well-sourced writing, peer review each other’s work, and express themselves in a coherent, formally correct, and lucid manner. Less expectedly, it also provoked several important conversations on subjects that are often sidelined in the academy, especially in the humanities—namely, the importance of collaborative work, public scholarship, and of making one’s research accessible to non-expert readers outside the university. The students were especially excited to see their writing make an immediate impact in the world and contribute to diversity in Slavic Studies. The Wikipedia entries they composed in May were viewed over 3880 times in just the first month of their existence!

Despite the tremendous disruptions the students suffered in the last weeks of classes due to COVID-19, they continued working on their Wikipedia projects and brought them to a conclusion. I suspect that their productivity and enthusiasm were sustained not only by fear of bad grades but also by the eagerness to use and improve social media platforms that are already important parts of their daily lives as part of their coursework. Thinking towards our inevitable transition online in the Fall, it might be a good time to consider which digital platforms can strengthen our pedagogical impact and make the learning experience of our students more meaningful.

Here are the links to some of the works that the students completed throughout the semester.