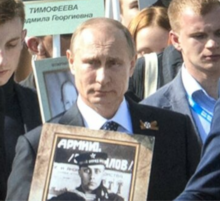 Karen Petrone, a Professor of History and Director of the Cooperative for the Humanities and Social Sciences at the University of Kentucky, is writing a book on war memory in Putin’s Russia.

This post is an excerpt from her essay “The 21st Century Memory of the Great Patriotic War in the Russia – My History Museum,” which appears in David Hoffmann, ed., The Memory of the Second World War in Soviet and Post-Soviet Russia (Routledge, 2021).

Celebrating the Soviet victory in “The Great Patriotic War” is an essential component of the historical narrative presented in the “Russia—My History” museum. Despite the fact that Vladimir Putin was not even born at the time of the “Great Victory,” he nonetheless plays an important role in the museum’s World War II exhibit. Or more accurately, Putin appears prominently in the museums’ depiction of the WWII victory, since there are actually twenty-three separate locations.

“Russia: My History” is a state-of-the-art museum complex or “historical park” that uses digital technology to creates a comprehensive narrative of Russian history from the beginnings of the Russian state in the 9th century to the present. Originally developed by the Russian Orthodox Church and with substantial financial support from the Russian state and the 50% state-owned natural gas company Gazprom, there are currently twenty-three nearly identical branches and counting. These “clones” are located in cities across the vast expanse of Russia from St. Petersburg in the North and West, to Iuzhno-Sakhalinsk and recently Vladivostok in the East, to Makhachkala in the South.

Putin makes an appearance in the museum’s “Great Victory” exhibit in five large photographs of his participation in the “Immortal Regiment (Bessmertnyi Polk)” parade on Red Square on Victory Day, May 9, 2015, the 70th anniversary of the war’s end. In the wildly popular “Immortal Regiment” parades, the children and grandchildren of veterans march to honor the sacrifices of their relatives in the Great Patriotic War, both representing and symbolically including those who are no longer alive to march. In 2015, Vladimir Putin took part in this so-called “people’s section” of the Victory Day Parade, carrying a picture of his father, “а common soldier,” who had been severely wounded during the war.

In each of the five images, Putin stands amidst a crowd of marchers, as an individual honoring the legacy of his deceased father and invoking his father’s presence at the festivities on Red Square. The exhibition of these pictures linked the “Great Victory” to Putin’s contemporary rule and presented an image of Putin as a man of the people, while at the same time reminding museum visitors of the “immortal” nature of the victors in the Great Patriotic War who are alive (at least symbolically) in both the past and the present.

Several additional pictures of the May 2015 “Immortal Regiment” march, with and without Putin in them, appear throughout the “Great Victory” exhibit, emphasizing the enormous number of marchers and the mass popularity of the event. The march also serves as an important feature of the culminating exhibit in the museum, “Russia—My History 1945–2016,” that explicitly ties the “Immortal Regiment” to nationalism and patriotism in present-day Russia. A picture of Putin at the 2015 “Immortal Regiment” parade also appears in a section of the exhibit called “The People’s Historical Memory,” dedicated to Putin’s “restoration of patriotism, sovereignty, and spirituality,” after the crises of the 1990s.  Another picture shows tens of thousands of people marching in a St. Petersburg “Immortal Regiment,” parade explaining,

The memory of the Second World War is a means of uniting the Russian people (narod). There was a high degree of consolidation in society’s rejection of attempts to revise the history and outcomes of the war, de-heroizing the feat (podvig) of the people. . . . The formation in Russian society of genuine historical memory and a return to national values became mass actions, dedicated to the popular memory of the war—“St. George’s Ribbons,” and the “Immortal Regiment.” 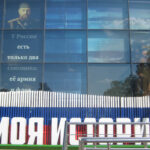 The facade of the Moscow Museum. Source: Wikimedia Commons.

Here the organizers of the “Russia—My History” exhibit lay out a clear justification for their emphasis on the “Great Victory” in the exhibits dealing with the 21st century. The memory of the war was a lynchpin of the efforts of the Putin government and other societal forces to consolidate national feeling and unite the Russian people. The exhibit recognizes Putin-era restoration of Great Patriotic War memory as a significant historical event in its own right, suggesting that the Russians have found unity under Putin just as they did during the Great Patriotic War.

The return to “genuine historical memory” under Putin redeems the nation from its disunity after the fall of the Soviet Union. The remembrance fostered in the “Immortal Regiment” parade forms the basis for the successful and unified conclusion of a cycle, in which the disunity of the late Soviet and Yeltsin eras is vanquished by the unity of the Putin era. This unity is not formed by the consolidation of society during an actual war but rather by the consolidation in remembrance of a past war, the “Great Victory.” “Russia—My History” asserts that the spiritual restoration of national pride and the celebration of national achievements in the Putin era are their own “Great Victory.”

Notable in the exhibit’s discussion of the Great Patriotic War is a rejection of the attempts of unnamed people to question the heroism of the war.  Like most national narratives, this one constructs a clear division between “us” and “them.” In this case, “the other” consists of those who in any way denigrate the efforts of the Russian people in fighting the Great Patriotic War, those who acknowledge Soviet mistakes, criticize Soviet actions like the Hitler-Stalin Pact or recognize the moral complexities that all people fighting a total war must face.

The Second World War has been the subject of official policing through the introduction of watchdog commissions and memory laws that threatened 300,000 rubles in fines or 3 years in prison for providing “deliberately false” information about the activities of the USSR during the Second World War. These laws target journalists and historians who wish to correct the historical record after decades of Soviet-era falsifications. During Putin’s “restoration of patriotism,” separating out those who question the heroism of the war has become an essential aspect of defining who truly belongs to the national community. The exhibit celebrates Putin as the defender of the Great Victory against its domestic and international critics, and as a “great victor” himself.