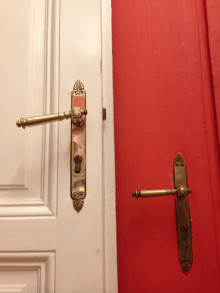 I write this homage to Svetlana Boym from afar. The news of Svetlana’s passing found me, as many of her friends, too abruptly and too far to pay our homage in person today. Mourning her at a distance is restless and isolating; it makes her death seem unreal. Then I found myself falling back on three arts of living I learned from her—writing, walking, and picture taking. These are only three of the myriad gifts Svetlana, in her unbound vibrancy, creativity, and generosity, gave and, I found, keeps on giving. Yet for today, even sharing a sense of these gifts will probably overflow the limits of this homage.

Svetlana loved walks. One day in the mid 1990s, when I was an undergraduate at Harvard and made the last office hour appointment with her, she proposed we escape the office building and take a walk by the Charles River. It must have been the end of a long day for her, yet she was genuinely curious about what this new undergrad had to say. I was intimidated and tongue-tied, yet she got me right away. She gave me what I came to know was her hallmark type of advice, brilliant and cutting right to the core of the manner. Never a marginal comment. We also talked about our relative distance to the sky here and back where we had come from. I said something about how much further up the sky was at home, and she talked at length about the closeness and beauty of the Petersburg sky. Still she would not call it home, she said, and we talked about her book in the making then, The Future of Nostalgia.

In the meantime, we took many walks together, in Cambridge and New York. As she noticed, our registers got more and more mixed. Talk of our projects and reading and writing always took a lot of the time, interlaced as it was with our lives. Our last walk, less than a month ago, was her first outing in a while, and we felt it again as an escape, as well as a victory, a good omen. We made our way to the Radcliffe Quad, found two lounge chairs, pulled them in the shade. We sat together, relishing our brief togetherness, and talked about her current projects, which she was bustling with, as always. She had sent me the collection of short autobiographical stories that she wrote when she received her diagnosis and started the grueling treatment. I have to confess my guilty hesitation in approaching them right away. I feared their difficulty and pain, an encounter with a different Svetlana that would already spell the loss of Svetlana as I knew her. Yet when I finally opened them, there she was, on the page, full-voiced Svetlana, ironic and self-ironic, hilarious, humane, wise. I recognized the humanity and wisdom beyond years that had made her last book, Another Freedom, into a reading cure for me, beyond the sheer intellectual joy-ride all her previous books give the reader. She told me that she was getting really fascinated by Ukraine, countering the one-sided image of a country seen through the tragic prism of war by a layered history of alternative artistic communities, like Koktebel. She reminded me that her beloved Mandelstam wrote some of his best poems there, and told me you can’t fully get them until you know the place. For a second, she was again my teacher, and I relished the time travel.

We then talked about her short story, recounting the momentous decision to immigrate, made in a beer line on Koktebel by an eighteen year old. I commented on her stories’ rare tact and tenderness toward her parents. In “The Secret Life of a Communal Apartment Neighbor,” she wrote: “My parents have an exceptional record of half-a century of loving marriage, yet I didn’t spy on their intimacy. Most of all I remember is the texture of our partition. So much for the primal scenes and Victorian peeping Toms.” The paragraph reminded me of Nabokov’s brush with a primal scene in Speak Memory, which he ended abruptly: “Exit Sigmund Freud.”

I had missed the entrance to the synagogue as its splendid entry is now barely visible because of the suffocating proximity of the communist era apartment building, which had instead attracted my attention. Born and raised in one, I’ve looked at communist apartment buildings with estranged interest ever since I read them decoded in Svetlana’s second book: Common Places: Mythologies of Everyday Life in Russia. But that morning, the synagogue courtyard was animated by a small group carrying on a conversation and the older guard warmly welcomed into the museum, the first visitor in over a month. Later, after he saw me pause at length in front of the poem board, the guard gently chided me for crying—“This is not for crying, miss, this is for understanding.” He assumed I was moved by Paul Celan’s poetry, but I had in fact discovered with a shiver the extraordinary poems of Selma Meerbaum, whose “Poem” started: “I’d like to live many more summers/To laugh and carry burdens/…To prop up the sky with my hands/.” And here is another fragment, from “August:” “It suddenly got cold/And I stand/Unreal/Like a ghost/Empty/And the rain passes/Like me/Far away/Close by/”