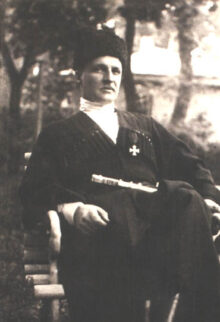 Luke Parra is an MA student at Indiana University Bloomington. His main research interest is the Ukrainian Revolution.

Since the 1600s, the “Russian Question” in Ukrainian society has sought to account for the strong, albeit unequal, connections between the two nations. Conversely, the “Ukrainian Question” for Russians has centered on extending Russian dominance over its neighbor’s lands and peoples. The brutality of Putin’s invasion and the crimes against humanity Russian soldiers have committed since February 2022 have brought this enduring conflict to a head, uniting Ukrainians in their refusal to continue negotiating their very existence.

Ukraine and Russia’s diverging historiographies demonstrate the irreconcilability of their two national visions. Today, state-approved Russian historians tend to venerate empire builders like Peter I or Stalin, each of whom expanded Russian influence—not only at the expense of peoples the state deemed “peripheral,” but of Russians themselves. Indeed, Russia’s rulers have historically subjected both ethnic Russians and minorities to political purges, mass executions, and imprisonment.

Ukrainian historiography, meanwhile, has had to contend with it’s neighbors resistance to any attempts to construct an independent national vision. Evidence of this pressure on Ukrainian self-conception nation emerges in the biographies of several cultural figures who attempted to walk the tightrope of adopting Ukrainian national elements while satisfying the demands of Russian imperialism.

One such figure is a little-known participant in the Revolution of 1917, the aristocrat and military leader Pavlo Skoropadskyi, who ruled a portion of modern Ukraine for seven months of the following year. He had been installed in that position with the aid of the German government, which was eager to exert its own influence on Ukraine following the Treaty of Brest-Litovsk. Skoropadskyi and his family were deeply ensconced in Ukrainian history, their roots stretching back to the 1648 Khmelnytsky Uprising, which strengthened the connections between Ukrainian lands and the Russian Empire. The Skoropadskyis’ most famous family member was Ivan, who had sided with Tsar Peter I in the Great Northern War (1700-21) against both Sweden and, following his defection from the Russian Imperial army, the Cossack leader Ivan Mazepa.

Pavlo Skoropadskyi’s upbringing taught him to revere his Cossack ancestors. His father and uncle passed down stories of their exploits and adventures. According to émigré historian Dmytro Doroshenko, visitors to the family’s estate noted numerous depictions of Cossacks decorating the halls, serving as constant reminders of the family’s deep connections to the region’s history.

Yet like so many before him, Pavlo Skoropadskyi sought to make his fortune in the Empire’s center. He married the niece of a prominent St. Petersburg official and went on to a brilliant career in the Russian army, achieving the rank of Lieutenant General and serving as an aide-de-camp to Tsar Nicholas II during the First World War.

Skoropadskyi’s ties to both Ukraine and Russia seemed to tear him apart. In his memoirs, he wrote, “the main difference between Ukrainian circles and me is that, while we both love Ukraine, I do not have any hate for Russia.” At the same time, he criticized Russian nationalists for their marginalization of the Ukrainian movement, writing “Great Russians do not understand the Ukrainian soul” and disputing the assertion that the Ukrainian nation “was constructed by the Germans and Austrians for the sake of weakening Russia.”

As Hetman of Ukraine, Skoropadskyi attempted to chart a middle course between these two national visions by focusing on the revival of a pre-national Cossack identity. On paper, wide-ranging reforms disentangled national conceptions from daily life with the implementation of Cossack military structures and the redistribution of land from large estates to the peasantry, theoretically forming Cossack communities. The reality, however, was a deeply embattled state unable to realize Skoropadsky’s reforms, even as the Hetman’s silence on the national question cost him the support of both Ukrainians and Russians.

Dispirited after six months of deadlock, Skoropadskyi tried to shore up his crumbling coalition by declaring support for a unified Russian state. Contrary to his expectations, Russian nationalists did not rally to his side, since, in their eyes, Skoropadskyi’s attempts at compromise had discredited him. With the Hetmanate rapidly losing its domestic footing, and the regime’s German backers withdrawing from the region entirely, Skoropadskyi’s tenuous grip on power finally disintegrated. In December 1918, he fled first to Switzerland, then Germany, where he would spend much of the rest of his life.

The story of Skoropadskyi’s political rise and fall shows that, in the shadow of the Russian Empire, national identity was always subject to negotiation. An additional contributor to the unique geopolitical constellation of 1918 was the presence of German power in the region, which further complicated Ukrainians’ search for national identity. Perhaps Skoropadskyi’s greatest error was his search for compromise, a middle way between national projects that proved to be mutually exclusive.

At the same time, frequently omitted from accounts of Skoropadskyi’s life is his renewed commitment to Ukraine’s unconditional independence, which emerged following his forced exile. He saw the Bolsheviks as an existential threat to Ukraine, a force that could not be negotiated with and could only be combatted.

Skoropadskyi’s struggles have had a long legacy. Arguably, participants in the Orange Revolution, Euromaidan, and other transformative national events have had to confront some of the same thorny issues around Ukrainian national identity that confounded the onetime Hetman.

The Russian army’s crimes against humanity at Bucha, Irpin, and Chernihiv, and the war as a whole, show that Putin’s “counteroffer” to this complex proposition of Ukrainian national identity is simple: submit or die. Yet this forced choice has not brought Putin the quick victory he desired as Ukrainians and all who support them recoil from the brutality of his invasion and the demand for complete, imperial domination that animates it.

Amid the misery and confusion of war, one thing is clear: never again will Ukrainians compromise with the Russian sense of self in hopes of peaceful coexistence. This new era marks the end of the “Russia Question” for Ukrainian society, inaugurating in its place what we might call an “Intra-Ukrainian Question.” To answer it, Ukrainians will no longer negotiate their identity except within the confines of the Ukrainian nation itself.