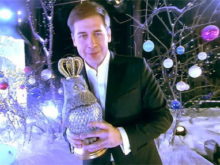 Maya Vinokour is a translator and a Lecturer in the Department of Slavic Languages and Literatures at the University of Pennsylvania.

The anthropologist Alexei Yurchak once described the Soviet Union as a place where everything was forever, until it was no more. But certain cultural touchstones managed to emerge from the rubble unscathed: the scrupulous maintenance of Lenin’s embalmed body; the system of informal agreements known as blat; and the wildly popular game show What? Where? When? [Chto? Gde? Kodga?] or ChGK for short.

Since 1975, ChGK has entertained millions of Russians with its clubby atmosphere, interactive game design, and emphasis on quick thinking. On ChGK, teams of six “experts” called znatoki — many of them members of Russia’s social elite — compete against viewers who have sent in their questions in the form of letters, physical objects enclosed in a “Black Box,” or brief videos. Each round, the znatoki have sixty seconds to think aloud. Once the buzzer rings, the team leader must select a znatok to articulate the team’s final answer — even if the brainstorming session yielded no clear consensus. If the answer is correct, the znatoki earn a point; if it is wrong, the viewer receives a cash prize from one of the show’s sponsors. The game ends when one side accumulates six points.

ChGK’s two highest honors, the Crystal and Diamond Owl, reflect its focus on mental prowess and cultural literacy. With a roulette-like contraption determining the order of questions and the preponderance of evening gowns and smoking jackets in the room, the show exhibits a distinctly casino-like aesthetic. Instead of a traditional studio audience, ChGK features znatoki from previous episodes, some of whom have been on the show for decades. Crowding around the game table, they give occasional hints or simply comment on the proceedings.

The show’s most unusual attribute is its interventionist host, whose disembodied, sarcastic voice directs the action from offscreen. It also mocks the players, waxes nostalgic, adjudicates disputes, and interpellates znatoki in the audience. Despite his absence from the visual field, the host is by no means anonymous. For the bulk of the show’s run, that position belonged to one of its creators, Vladimir Voroshilov. When he died in 2001, the godlike role passed to his stepson, Boris Kryuk.

Hating the Player, Not the Game

Recently, Kryuk caused a stir when he disinvited one of the show’s most celebrated players, the distinguished lawyer (and two-time Crystal Owl winner) Ilya Novikov, from ChGK’s 2016 season. In an August 17 interview, Kryuk clarified that Novikov’s dismissal stemmed from his activity as a defense lawyer in the highly politicized case of Nadezhda Savchenko, the former Ukrainian fighter pilot. In 2014, Savchenko was abducted from her post in East Ukraine and taken to Russia, where she was accused of directing the artillery fire that killed two Russian journalists. Though initially convicted of murder and sentenced to 22 years behind bars, Savchenko was released in a May 2016 prisoner swap with Ukraine.

According to Kryuk, Novikov’s mistake was to believe that participation in ChGK was compatible with political activism. “Please understand,” he said, “if you defend Savchenko as a ChGK player, it means that ChGK is also pro-Savchenko.” Kryuk is right to be cautious: because ChGK airs on Channel One Russia, the state’s official propaganda network, even a whiff of sedition could potentially jeopardize the show’s future.

In the inevitable social-media uproar over Novikov’s departure, commentators bristled at Kryuk’s assertion that “ChGK exists outside of politics,” recalling numerous occasions when znatoki had spoken their minds on political issues without repercussions.

In a way, the show’s political non-neutrality is baked into its very structure. The host’s invisibility was not a deliberate choice but a workaround: after a 1970 conflict with the Soviet authorities over the show Auction, which he also hosted, Voroshilov was prohibited from appearing on television. His person banished from the screen and his name from the credits, all that remained was Voroshilov’s voice, which compensated for its owner’s physical absence by adopting the abrasive persona that defines ChGK today.

It is tempting to view the Novikov incident through the lens of ChGK itself, with the show’s formal structure representing the panoptic, paranoid nature of life in Putin’s Russia. On and off television, an omniscient, invisible “host” berates “expert contestants,” who must not only perform their ingenuity for “points,” but also dodge constant attacks from “on high.”

This interpretation, however, does not take into account Novikov’s own perspective. As the former znatok told journalists on Rain [Dozhd], Russia’s last remaining independent television channel, he foresaw a possible conflict with ChGK as soon as he took on the Savchenko case. On his own initiative, he claims, he submitted an undated resignation letter in case his presence ever became problematic for Kryuk. “I’m a lawyer, not a showman,” Novikov told his openly skeptical interlocutors, implicitly divesting his punishment of its bite.

It is impossible to verify this version of events, which conveniently absolves Kryuk and paves the way for Novikov’s eventual return to ChGK. Despite his efforts to imbue his actions with agency, Novikov sometimes appears not to believe his own take. “That it became necessary to sign [the resignation letter] in March 2016 had nothing to do either with me or Boris,” he remarks toward the end of the Dozhd interview. When the journalists press him for details, Novikov throws the ball back into the panoptic court: “Well, that’s how the stars aligned…those are just the rules of the game.”

At the interview’s conclusion, Novikov suggests that he, like many Russians, is playing quite a long game indeed. Asked when he might come back to ChGK, Novikov quotes the punchline to a well-known joke involving the Turkish satirical philosopher Hodja Nasreddin. In the joke, Nasreddin agrees to teach a donkey to read within twenty years. If he fails, the emir will behead him. When his friends wonder how he could possibly take such a risk, Nasreddin responds: “No big deal. In twenty years, either the donkey will die, or the emir, or me!”

“Maybe the emir will die,” Novikov repeats, looking straight into the camera and smirking. “Anything can happen.” Even a Crystal Owl, it seems, only takes wing at dusk.