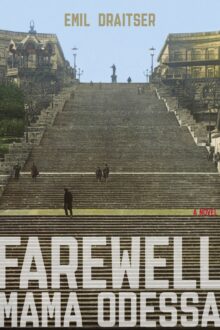 Editor’s Note: This week, All the Russias will be running a four-part series of excerpts from Emil Draitser’s new novel, Farewell, Mama Odessa, out this month from Northwestern University Press. The novel is set in 1979, at the height of the Soviet Jewry movement in America and worldwide.

Emil Draitser is an author and professor emeritus of Russian at Hunter College in New York City.

Boris found a quiet corner in the Viennese post office and read the letter from Los Angeles, from his cousin Ilya:

So, you are in Vienna. Congratulations! You’ve finally crossed your Rubicon. I’m very happy for you, and I can’t wait to give you a big hug at the first opportunity.

I have exciting news to share with you. Do you remember how we were both flabbergasted when Fima, your friend from Moscow who came down to Odessa on his vacation to swim in the Black Sea, whispered to us so nobody would have heard him? Back in Moscow, he ran into a group of American tourists from Chicago. They told him that in America, many Jews (and non-Jews!) sported bumper stickers on their cars that read “Save Soviet Jews”! We stared at each other. There were people on the other side of the globe who cared about us? I have to admit: I felt a lump in my throat. I couldn’t believe total strangers on the other side of the globe not only thought of us but also fought for our freedom.

So, can you imagine, not only did I meet one of those incredible Americans, but I’ve become friends with him? His name is Si Frumkin. A tall, slender man in his late forties. Blond. Every time I look at his bushy mustache, it reminds me of the ears of our Ukrainian wheat. When he walks, he has a light, bouncy gait. Looking at him, you wouldn’t ever guess how much horror he’d lived through in his life.

When I asked him what makes him care about what happens to us, the Soviet Jews, he looks up at me in astonishment as if he were saying, What kind of question is this? Isn’t it obvious? Are you even asking me this?

The secret of his obsession is that he knows first-hand what happens when some people suffer, and others turn a blind eye. As the Russians say, he knows it on his own skin. Here, literally.

He was born Simas Frumkas in the city of Kaunas, Lithuania, in 1930. He came into the world at the wrong place at the wrong time. He was hardly ten when his family got in big trouble. Twice within a single year, mind you! It happened for the first time in 1940, less than a year after Hitler’s and Stalin’s henchmen, Molotov and Ribbentrop, signed their secret agreement dividing the whole of Europe into what they called “spheres of influence.” Shortly after, Hitler pounced on Poland, and Soviet tanks rolled into Lithuania. They took away the Frumkes’ car and motorcycle dealership, and the family lost any means of support.

Less than a year later, Hitler had a change of heart regarding his friendship with Stalin. When he attacked the Soviet Union, German tanks rolled into Lithuania, and the whole family, including Si, found themselves behind the city ghetto’s barbed wire.

The Nazis evacuated the ghetto in 1944, breaking up the family. They sent Si and his father to the Dachau camp, and his mother to a camp in Poland.

“My dad.” Si told me, shaking his head. “I survived thanks to him. When they unloaded us from the train at Dachau, they sorted us out like cattle. The Nazi officer asked me about my age, and my dad whispered, ‘Tell him you’re sixteen . . . you’re sixteen.’ I was hardly fourteen but he knew already that, when a new batch of prisoners arrived at the camps, the Nazis disposed of children right away. A troublesome nuisance, that’s what children were for them. But the Nazis needed to replenish their workforce. I was tall for my age, and they thought I’d be valuable as a slave.”

Si’s face grew pensive and sad. His father didn’t survive the ordeal. He died about three weeks before the day the Americans liberated the Dachau prisoners in 1945. Can you fathom, Boris, what Si was going through?! He was just a kid!

Well, in 1949, after bouncing around the world for a few years, Si came to the States as a displaced person. He studied here. In time, he became a businessman. But survivor’s guilt tormented him. “How come I lived, but my father and so many others perished?” he asked me repeatedly, looking into my eyes as if I had any wisdom about the whims of fate.

That’s why as soon as he heard about the plight of the Soviet Jews, he invested so much of his time and energy into a business that promised him not big returns, but big trouble.