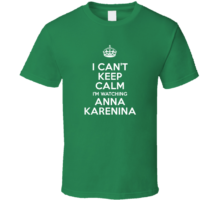 This entry concludes our series on adapting Anna Karenina, which began on Friday in cooperation with the Tolstoy Studies Journal.

David Herman is Associate Professor and Chair of the Department of Slavic Language and Literatures at the University of Virginia.

For me the magnificence and torment of Anna Karenina starts with the perfectly balanced details Tolstoy weaves around his heroine.  It’s impossible to deny the cruelty dealt to Karenin, yet no easy task to locate consistent moral principles that would condemn Anna without condemning, say, Levin, Kitty, or the narrator too.  My frustrations with the Wright/Stoppard movie (chronicled in the article in a forthcoming issue of Tolstoy Studies Journal) start with their insensitivity to Tolstoy on this score.  They couldn’t have reproduced all of Tolstoy’s intricate balance, but they could certainly have tried harder.  Wright’s jaunty, in-your-face visual style offers a certain type of pleasure absent in Tolstoy, but I found it tough to enjoy when you can’t forget the truly exquisite pleasures that had to die for it to be born.

The territory is familiar to any Russianist or serial re-reader of the novel, but the calibration and care that go into Anna’s complex moral portrait are worth recalling.  Perhaps no two serial re-readers would tell it exactly the same; here is one version.

A philandering brother who wakes up on the first page recalling an aria from Don Giovanni, but nonetheless is never punished.  A society where adultery is widespread, that condemns Anna not for hurting an innocent man, but for refusing to lie in the right ways.  A husband whose career forces the heroine to reside in the vapid capital where, Tolstoy suggests, grounded and good people rarely venture.  Just one child, not enough to absorb or reward all her energies; behind this small family we vaguely suspect some sort of sterility, figurative or medical, on Karenin’s part (could he be pictured as sire of a large brood?), but have no grounds for certainty.

The fact that Anna is the only orphan-protagonist married to another orphan in Tolstoy; the others without exception all get non-orphans, drawing vital sustenance from their mates’ family-grown instincts and warmth, as Levin, say, does with Kitty.  The only major character in the book without family, money, or ancestral lands of her own to fall back on, which exacerbates her “unaristocratic” panic that Vronsky might tire of her and she could be completely ruined.

Temptation in the peculiar form of Vronsky, the perfect society man, which means perfectly shallow and carefree, hence the last candidate for passion, rule-breaking, or his fixed role of slight emotional subservience to Anna and her furious moods.  The disorienting fact that Vronsky is unmistakably morally improved by the affair, for the first time learning to honor another human being and in the end giving of himself more generously than any of the proper husbands in the book.

The narrator’s strange silence on Anna’s motive for the affair when we get so much of Levin’s inner monologue, which forces us to entertain a baffling range of possibilities, from plain boredom or lust (many reviews of Wright’s movie, along with Wright himself, posit lust as Tolstoy’s self-evident message), to what must be the orphan’s submerged but still raw need to finally know what the love of a full-fledged, vibrant adult heart feels like, which she longs for so passionately she cannot allow herself to trust it when she gets it and so tries to wreck it.

The unmistakable disapproval of Anna in scattered narratorial comments, balanced against the book’s consistently sensitive probing of her interiority and sufferings.  An obvious authorial sexism at moments, yet an unmistakable respect for the discrete individual and attention to that sexism’s unfair costs.  Yet on top of this a certain indifference – Stiva’s, but, we sense, partly Tolstoy’s as well – towards the miseries of the one woman who devotes herself wholly to her children, Dolly, who cannot get even a small portion of the time and latitude Levin demands as inalienable rights in building the life he requires.

A transgression by the heroine that in another setting might reek of unbridled passion and an ugly selfishness, yet in a novel manifestly in love with life lived passionately and the unstinting exploration of the authentic self (extolling their presence in Levin, ridiculing their absence in characters like Varenka and Koznyshev, demanding them as immutable preconditions of a meaningful life or even just a good painting).  A concomitant impatience in the novel with Christian self-sacrifice and the various forms of selflessness (except motherhood?), which, in Karenin, Varenka, Koznyshev, and Levin with his brother Nikolai, are always revealed to be slightly inauthentic – seemingly noble, but actually a bit cowardly, less from the heart than to muffle the heart (Karenin, for example, self-effacingly forgiving Anna in part to drown out the thought of his first career setback endured just hours before).

A defining trauma in the backstory of the heroine, Anna losing her parents and being raised by an unloving aunt.  An ill-starred marriage, perhaps enforced by the sort of shaming Sonya is subjected to in War and Peace, to the first man that aunt could entrap, who did not want to marry at all.  A narrative that explicitly poses the question (Kitty wonders), but never divulges the answer, of the heroine’s attitude to and agency in the match.  The husband, reimagined repeatedly in the drafts until Tolstoy achieved exactly the effect he wanted, of a man who does nothing wrong, but nothing quite right, woefully out of touch with his own interiority or anyone else’s, who memorably says, “By digging into our souls, we often dig up what might have better remained there unnoticed,” the perfect foil for a meditation on adultery, maximally guiltless and yet minimally satisfying as a partner, lover, or simply friend.  A marriage dynamic, as we piece together from Karenin’s recollections, that rested on Anna creating all the intimacy in the relationship by meeting him entirely on his emotional terms.  The peculiar fact that Tolstoy postpones the revelation of the essential information on the heroine’s upbringing and marriage until late in the novel, where it is casually tossed off in passing, as if he meant to tempt us to pass judgment on Anna without knowing her past, or, perhaps, to chide us for doing so, or both.  The sad contrast to Levin, who feels he will never be able to think clearly or truly work well unless he can marry just the woman of his choice.

The heroine’s bitterness that of all things she is expected to dissemble about her finally uncovered deepest authenticity, the first experience to satisfy gnawing lifelong needs – what a person ought to be most honest about.  The similarity in personality between Anna and Levin, who, it is easy to forget (Tolstoy tells without dwelling), offends every second person he meets (the narrator uniformly declining to follow those people’s reactions except in the opening scene).  Tolstoy’s clever veiling of the negotiations over custody of Seriozha and therefore responsibility for his misery, in which both sides continually shift positions and nothing is quite distinct, so that we only know that Anna increasingly fights for Seriozha at slightly less than the rate at which Karenin’s resistance hardens.  Anna’s coldness to her second child, sign she is a selfish human being, or else that having lost one child she had to close down that wounded zone of her heart to survive, or both.

Perhaps the novel’s most troubling demonstration, the piercing circularity Tolstoy orchestrates for us within the tragedy of orphanhood, where Anna, precisely in reaching out for Vronsky to try to soothe her own orphan’s longings, ends up orphaning Seriozha.  Seriozha himself, who enters the novel as possibly the most loving character in all Tolstoy but exits it loathing all mankind and himself, doomed, it is hinted, to spend his life relating to others as woundedly as his mother did to him.  The ensuing implication that we are all orphans by a new kind of figurative but more important orphanhood even when our mothers are alive, because ordinary, omnipotent self-love and egoism taint and ruin all human relations, except a harsh new religion the novel cannot descry clearly yet, and that Tolstoy no longer sees any hope outside religion for what was always his fondest dream, of connecting souls.

The four-part depression into which the book slowly slides – Anna, Seriozha, Levin, and Tolstoy himself at the same point in the writing – over their orphanhood, embodied for Levin and Tolstoy as dread before the enormity and injustice of death, which for orphans has always already claimed too much.  Levin’s astonishing suicidal urge, when we thought he had achieved his heart’s desire, and the narrator’s even more flabbergasting attempt to pass off a fascination with guns and nooses as a minor matter that might befall anyone.  The deeply disorienting and not at first obvious collapse of the novel’s value system in its last third, as Tolstoy’s crisis takes root and the narrative’s vision of the good as shared intimacy with at least one other person, so carefully cultivated for hundreds of pages, is rejected as too much to ask of human beings.  Levin’s concluding monologue, at first glance uplifting, where he backs out of his commitment to full intimacy with Kitty and Tolstoy abandons for good the ideal of marriage, the same retreat into self which in Anna and Seriozha signified tragedy and failure.  The suspicion that Anna’s jealous and misanthropic ravings as her psyche crumbles, clearly meant to represent the bitter fruit of adultery, provided instead a platform for the dark side of a personal vision Tolstoy wasn’t planning to have, of despair over human connection, that the warm love between first mother and child and then husband and wife, has once and for all proven that it is never strong enough to save anyone from death.  And then, outside the novel proper, later works by the same author such as Confession, Death of Ivan Il’ich, On Life, and Kreutzer Sonata, which confirm much of Anna’s cynical, misanthropic, self-condemnatory final monologue and rejection of mutuality as true and central to late Tolstoy’s theology.

This is, obviously, a lot for any performance of roughly two hours to even try to capture.