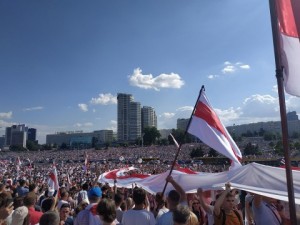 Join us for another virtual meeting of the New York-Russia Public Policy Seminar. This panel is  co-hosted by Columbia University’s Harriman Institute and the New York University Jordan Center for the Advanced Study of Russia.

This month, our distinguished panelists will bring a comparative perspective to the ongoing anti-regime protests in Belarus. Drawing on current and ongoing research, they will discuss what the several months long movement may mean for the political future of Belarus, Russia, and other countries in the region.

Olga Onuch, Associate Professor in Politics at the University of Manchester

Katsiaryna Shmatsina, Rethink.CEE fellow at the German Marshall Fund of the U.S.

Aliaksandr Herasimenka is a postdoctoral researcher at the Computational Propaganda Project at University of Oxford. His work investigates how political groups and governments use social media to manipulate public opinion. He also studies how people organise protest movements in authoritarian countries. His research interests also include computational methods, messaging platforms and anti-vaccination movements. Herasimenka is also part of the Alternative News Networks project. Twitter: @alesherasimenka

Olga Onuch is a Senior Lecturer in Politics at the University of Manchester. She is also an Associate of Nuffield College (Oxford) and of the Harvard Ukrainian Research Institute, and was a Research Fellow at the Davis Center (Harvard) in 2017. Her comparative study of protest (as well as elections, migration & identity) in Eastern Europe and Latin America has made her a leading expert in Ukrainian (and Argentine) politics specifically, but also in inter-regional comparative analysis. Her book Mapping Mass Mobilizations (2014, reviewed in Europe-Asia Studies) explores the processes leading up to mass protest engagement in Ukraine (2004) and Argentina (2001). Onuch’s research on protest politics in Ukraine has resulted in her consulting policymakers in Canada, Ukraine, the UK and US. Her research received praise and awards placing her on the map as one of the foremost experts on protests and activism in Ukraine.

Katsiaryna Shmatsina is a Belarusian political analyst focusing on the Belarusian foreign policy, regional security, and the impact of the great power relations on smaller actors. Katsiaryna’s portfolio includes non-residential fellowship at the German Marshall Fund (2020) and Think Visegrad Fellowship (2019). Previously, she worked for the American Bar Association where she managed the democratic-governance and rule-of-law projects. She holds a Master’s in international relations from Syracuse University, New York and a law degree from Belarusian State University.

Gerard Toal (Gearóid Ó Tuathail) is Professor in the School of Public and International Affairs at Virginia Tech’s campus is Arlington, Virginia. He is a founding figure of critical geopolitics, a research field that examines the interactions of material space with geographical imaginations and technological change in the study of world politics. He is also a leading figure in the study of territorial conflicts in post-Communist contexts. His works include the award-winning books Near Abroad: Putin, the West and the Contest for Ukraine and the Caucasus (Oxford, 2017) and Bosnia Remade: Ethnic Cleansing and its Reversal (Oxford, 2011). His latest research project examines geopolitical orientations in six states, and five contested regions, close to the Russian Federation. He is also writing a book on geopolitics amidst climate change.