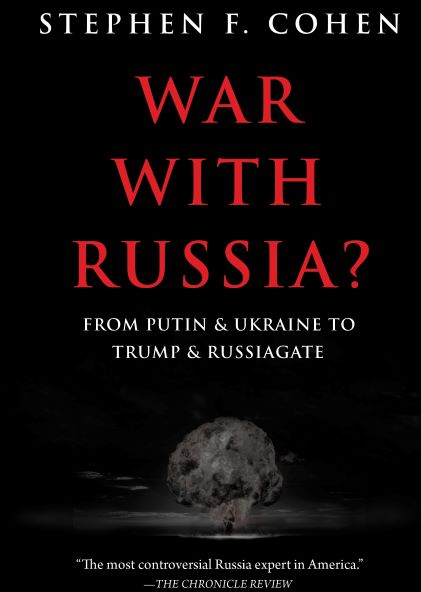 Please join us on Tuesday, April 23, 2019, for a book talk with Stephen F. Cohen and commentary from Jack Snyder, Robert and Renée Belfer Professor of International Relations at Columbia University . This event is supported by a grant from the Carnegie Corporation of New York. It is part of our New York City-Russian Studies & Policy Event series and is co-sponsored by the Jordan Center for the Advanced Study of Russia and Columbia University’s Harriman Institute; Russia, Eurasian, and East European Studies.

This event will be held at 405 Silver (Silver Arts & Science), 100 Washington Square East

There will be a book signing after this event. Please note that the NYU Bookstore off-site event sales are credit/debit card or exact change cash only!

Professor Cohen’s provocative book argues that America is in a new Cold War with Russia even more dangerous than the one the world barely survived in the twentieth century. The Soviet Union is gone, but the two nuclear superpowers are again locked in political and military confrontations, now from Ukraine to Syria. All of this is exacerbated by Washington’s war- like demonizing of the Kremlin leadership and by Russiagate’s unprecedented allegations. US mainstream media accounts are highly selective and seriously misleading. American “disinformation,” not only Russian, is a growing peril.

Stephen F. Cohen is Professor Emeritus of Politics at Princeton University, where for many years he was also director of the Russian Studies Program, and Professor Emeritus of Russian Studies and History at New York University. His other books include Bukharin and the Bolshevik Revolution: A Political Biography; Rethinking the Soviet Experience; Sovieticus; Failed Crusade: America and the Tragedy of Post-Communist Russia; and Soviet Fates and Lost Alternatives. Cohen is married to Katrina vanden Heuvel, editor and publisher of The Nation, where he is a contributing editor.