Comics of the New Europe 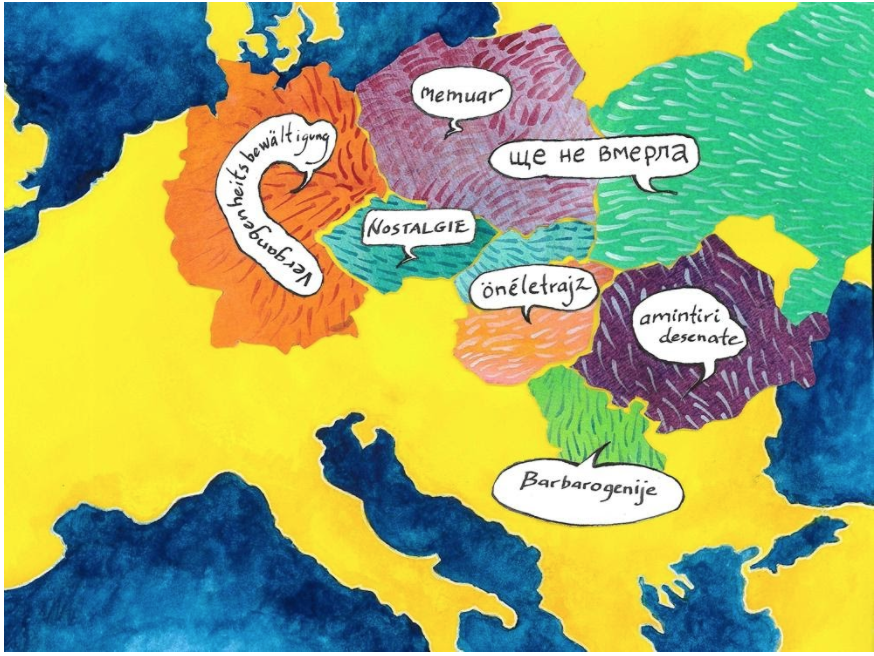 In this talk, José Alaniz (University of Washington) and Martha Kuhlman (Bryant University) and Biz Nijdam (University of British Columbia) will discuss the recently published edited collection Comics of the New Europe. This edited collection offers insights into the comics cultures of a number of post-socialist countries including the former East Germany, the Czech Republic, Slovakia, Poland, the former Yugoslavia, Hungary, Romania, and Ukraine. A new generation of cartoonists is reexamining and reevaluating not only their respective comics traditions but also their own post-1989 identities and ways of representing their complicated national histories.  Editors and contributors José Alaniz and Martha Kuhlman, as well as contributor Biz Nijdam will give highlights of their chapters on Ukrainian author Igor Baranko, Czech authors Vojtěch Mašek and Džian Baban, and German authors Susanne Buddenberg, Thomas Henseler, and Johann Ulrich respectively. Baranko’s work reimagines Ukrainian identity through a fictional recasting of Native American history; Mašek’s work satirizes both the socialist past and the post-socialist present with wit, irony, and a hint of Kafka; Buddenberg/Henseler’s work is a documentary project on stories of crossing the Berlin Wall.

José Alaniz is Professor in the Department of Slavic Languages and Literatures and the Department of Comparative Literature at the University of Washington – Seattle, authored Komiks: Comic Art in Russia in 2010 and Death, Disability and the Superhero: The Silver Age and Beyond in 2014 (both published by the University Press of Mississippi). He chaired the Executive Committee of the International Comic Arts Forum (ICAF) from 2011 to 2017. His research interests include Cinema Studies, Death and Dying, Disability Studies, Critical Animal Studies and Comics Studies.

Elizabeth “Biz” Nijdam is Assistant Professor in German Studies in the Department of Central, Eastern, and Northern European Studies at the University of British Columbia in Vancouver, Canada. She is also a SSHRC postdoctoral fellow at the University of Waterloo, working on her book manuscript Paneled Pasts: History, Media, and Memory in the German Graphic Novel (under contract with Ohio State University Press). Biz’s research and teaching interests include the representation of history in comics, comics and new media on migration, and comics as a feminist methodology. Biz also sits on the Executive Committee of the International Comic Arts Forum and the Executive Board for the Comics Studies Society.

Martha Kuhlman is Professor of Comparative Literature in the Department of English and Cultural Studies at Bryant University. With Dave Ball, she co-edited The Comics of Chris Ware: Drawing is a Way of Thinking (2010), published by the University Press of Mississippi, and has published articles on Central European authors in various journals including Modernism/Modernity, The Comparatist, and World Literature Today.  She has chapters on graphic novels in The Cambridge Guide to the Graphic Novel, Comics and Abstraction, and Approaches to Teaching the Graphic Novel.  She served on the MLA Forum on Comics and Graphic Narratives from 2012-2017, and on the Comics Studies Society executive board 2017-2019.