Crisis and Bargaining Over Ukraine: A New US-Russia Security Order? 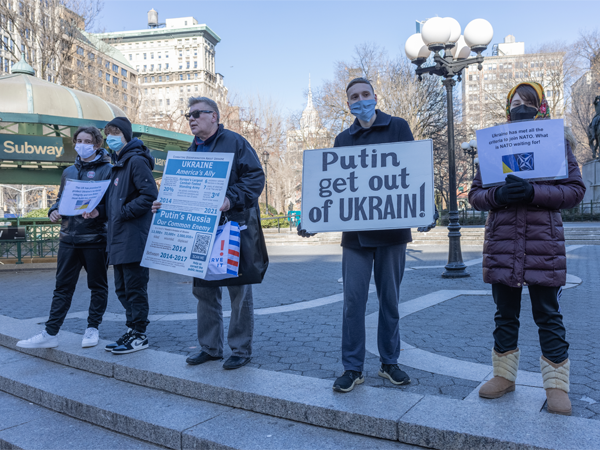 Join us for a meeting of the New York-Russia Public Policy Series, co-hosted by the New York University Jordan Center for the Advanced Study of Russia and the Harriman Institute at Columbia University.

As Russian troops have amassed on Ukrainian’s border, talks aimed at resolving the stand-off between Russia and NATO appear to have collapsed. Poland’s Foreign Minister warned that “It seems that the risk of war in the OSCE area is now greater than ever before in the last 30 years.” Russia has been seeking a new European security agreement that would include formal binding pledges to limit NATO’s expansion and military activities across Eastern Europe. US and NATO officials respond that they will not give up on NATO’s principles, especially its “open door” policy towards membership. Ukrainians are bracing for a renewed conflict amidst domestic political turmoil.

Are the Russian and Western positions irreconcilable? How did we get to the brink of another conflict? And how would a Russian-Ukrainian war affect Russian and Ukrainian domestic politics? How would it impact Ukrainian identity and foreign policy goals?

Keith Darden is an Associate Professor in the School of International Service at American University specializing in comparative politics, international relations, and the politics of Eurasia. His research focuses on nationalism, state-building, and the politics of Russia, Ukraine and Eurasia. His forthcoming book, Resisting Occupation (Cambridge University Press), explores the development of durable national loyalties through education and details how they explain over a century of regional patterns in voting, secession, and armed resistance in Ukraine, Eurasia and the world. His award-winning first book, Economic Liberalism and Its Rivals (Cambridge University Press, 2009) explored the formation of international economic institutions among the post-Soviet states, and explained why countries chose to join the Eurasian Customs Union, the WTO, or to eschew participation in any trade institutions. At SIS, Prof. Darden teaches courses in international relations, comparative politics, and the politics of Eurasia. Beyond SIS, Prof. Darden is co-editor of the Cambridge University Press Book Series Problems of International Politics and is actively engaged with Russia and Eurasia though the Bilateral Working Group on US-Russia Relations, PONARS Eurasia, the Valdai Discussion Club, and other forums.

Olena Lennon is an adjunct professor of Political Science and National Security at University of New Haven. After completing her PhD at the University of Nebraska-Lincoln, she moved back to Ukraine to fulfill her Fulbright obligations. She returned to the U.S. shortly before the onset of the Maidan revolution in November 2013 and the ensuing war in eastern Ukraine. With her family remaining in the active war zone, she has kept her finger on the pulse through direct communication with people on the ground, local media outlets, and frequent visits. She has participated in several panels related to issues in Ukraine, facilitating a more informed and objective analysis of the ongoing Russo-Ukrainian war and not only. Lennon’s work has appeared in Foreign Affairs, The National Interest, Nationalities Papers, Journal of Political Risk, Yale Global, Demokratizatsiya, Higher Education in Europe, and other publications. Her current research is focused on questions of political legitimacy, conflict management, and identity politics.

Mary Sarotte is the Kravis Professor of Historical Studies at Johns Hopkins University, a researcher at Harvard’s Center for European Studies, a member of the Council on Foreign Relations, and a former member of the Institute for Advanced Study in Princeton. Her books include  Not One Inch: America, Russia, and the Making of Post-Cold War Stalemate (2021), The Collapse: The Accidental Opening of the Berlin Wall, listed as a Best Book of 2014 by The Economist and the Financial Times, and 1989: The Struggle to Create Post-Cold War Europe, a Financial Times Best Book of 2009.

Maxim A. Suchkov is Director of the Institute for International Studies, and Associate Professor at the Department of Applied International Analysis at the Moscow State Institute of International Relations (MGIMO-University). He is also an expert of the Russian International Affairs Council (RIAC) and of the Valdai Discussion Club. His research interests include security and foreign policy, future conflicts, US-Russia relations, developments in the Middle East as well as the impact of technology on international relations. Suchkov is a frequent contributor and columnist to Russian and international media.