Golfo Alexopoulos: Medicine and Mortality in the Gulag 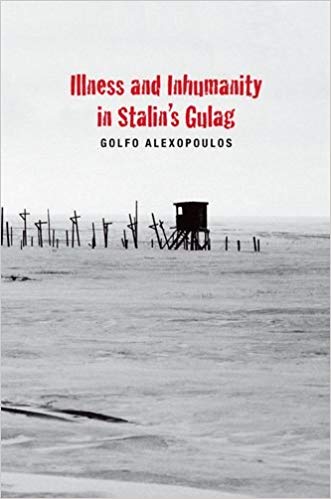 Please join us on Tuesday, April 9th for “Medicine and Mortality in the Gulag”, a talk with Golfo Alexopoulos, University of South Florida, Tampa. This event is part of the Occasional Series, sponsored by the NYU Jordan Center for the Advanced Study of Russia.

Much has been written about the Gulag since the recent declassification of the Gulag archives. Historians have examined, for example, the economics and politics of the forced labor camp system, Stalin’s objectives in using forced labor, the way the regime propagandized the “rehabilitation” of prisoners, and the Gulag’s economic role during the war. Others have studied the memoirs of Gulag survivors and the memory of the camps in Russia.

Illness and Inhumanity in Stalin’s Gulag is the first book devoted to prisoner health and the system of human exploitation in the Stalinist camps. Through the lens of health and medicine, one sees the Stalinist forced labor camp system in a new light. Memoirists and survivors have detailed the brutality of the camps, and historians have written about the horrific conditions—the sadistic guards, harsh physical environment, and the starvation of prisoners. The prevailing view among scholars was that Gulag prisoners were not willfully or intentionally worked to death. Rather, the Stalinist leadership had an incentive to keep prisoners healthy and working.

The book disproves this, through a careful examination of recently declassified Gulag records on prisoners’ health. It argues—contrary to much of the Gulag literature—that the Stalinist camps were more like death camps, to a degree previously unimaginable. It demonstrates the intentional brutality of the system, the willful practice of working prisoners to death or near-death, and the systematic abandonment and neglect of nearly-dead prisoners. Perhaps the book’s most important contribution is that it brings forth substantial evidence to show that Stalin’s Gulag systematically released terminally ill prisoners as a way of unloading “dead weight.” Stalin’s Gulag systematically worked prisoners to the point of near death and then discarded them en masse. The book presents a new approach to Gulag mortality and Stalinist intentionality.

Dr. Golfo Alexopoulos is professor of Russian/Soviet history, chair of the history department, and founding director of the Institute on Russia at the University of South Florida in Tampa. Her recent publications include the book, Illness and Inhumanity in Stalin’s Gulag (published in 2017 by Yale University Press) and the article, “Medical Research in Stalin’s Gulag,” published in 2016 in the journal Bulletin of the History of Medicine. The present talk will focus on this research.

Dr. Alexopoulos received her PhD in Russian history from the University of Chicago and her MA in Russian studies at Yale. She has been awarded fellowships from the Davis Center for Russian and Eurasian Studies at Harvard, the Hoover Institution at Stanford, and the National Endowment for the Humanities. Currently, she is finishing a project as editor—the forthcoming English translation of Jacques Rossi and Michèle Sarde’s book, Jacques, le Français: pour mémoire du Goulag which is under contract with the University of Toronto Press.