Russia and the Africans 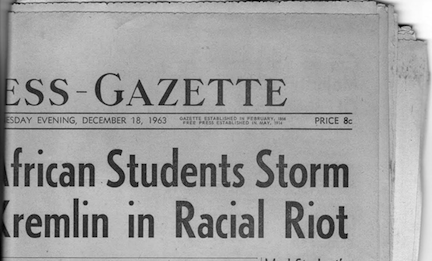 Co-sponsored by the Jordan Center for the Advanced Study of Russia and the NYU Africa House. With the participation of the Skirball Department of Hebrew and Judaic Studies, the Hagop Kevorkian Center for Near Eastern Studies, Glucksman Ireland House, and the Department of History.

The Diasporas Project is a series organized by the Jordan Center for the Advanced Study of Russia in spring 2013. It is part of the Center’s inaugural year and we are grateful to the many units around NYU that have been offering help and guidance. Sessions are co-organized with Ireland House (31 January – 1 February), Kevorkian (14 – 15 March), and Hebrew and Judaic Studies (25 26 April).

The overarching purpose of the project is twofold: to consider the shared characteristics and shared assumptions that underpin the idea of a diaspora, and in the process erode our parochialisms; and to better grasp what is at stake and what is assumed when we cast movement as a diaspora rather than say an emigration, a migration, sex trafficking, slavery, or a flow of refugees. The project in no way aims to settle these questions one way or another; rather it aims to address them intelligently and forthrightly, as a guide to students and colleagues.

*Previously published as a chapter in Under the Sky of My Africa: Alexander Pushkin and Blackness. Edited by Catharine Theimer Nepomnyashchy, Nicole Svobodny, and Ludmilla A. Trigos. Foreword by Henry Louis Gates Jr. 2006. Northwestern University Press.

Book Description: The first single volume in English on this rich topic, Under the Sky of My Africa addresses the wide variety of interests implicated in the question of Pushkin’s blackness. In essays that are by turns biographical, iconographical, cultural, and sociological in focus, the authors representing a broad range of disciplines and perspectives take us from the complex attitudes toward race in Russia during Pushkin’s era to the surge of racism in late Soviet and post Soviet contemporary Russia. Under the Sky of My Africa provides a wealth of basic material on the subject as well as a series of provocative readings and interpretations that will influence future considerations of Pushkin and race in Russian culture.