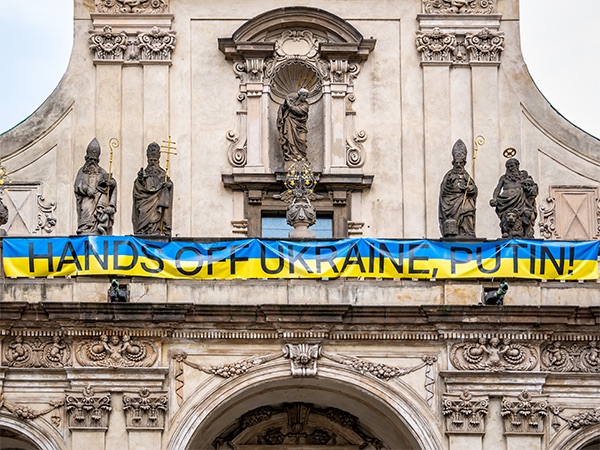 Join us for a meeting of the New York-Russia Public Policy Series, co-hosted by the Harriman Institute at Columbia University and the New York University Jordan Center for the Advanced Study of Russia.

The Russian invasion of Ukraine has reached another crucial point. The Ukrainian counter-offensive in early September surprised the world and the Kremlin, forcing a hasty Russian retreat. In response, the Kremlin declared mobilization and pushed on with the annexation of the territories it had managed to hold. Russia has also escalated its threats against the U.S. and Europe, aiming to undermine the Western resolve in supporting Ukraine. Our panel of experts on Russia and Ukraine will discuss the developments that we can expect in the next few months. What would be the impact of Putin’s mobilization on the war effort and on regime support in Russia? How would the mobilization and the annexations affect the Ukrainian counter-offensive? How do Ukraine and Ukrainian society respond to this escalation? How should we understand and deal with Putin’s nuclear threats?

Oxana Shevel, Associate Professor of Political Science at Tufts University; Current President of the American Association for Ukrainian Studies (AAUS); Associate of the Harvard Ukrainian Research Institute and of the Davis Center for Russian and Eurasian Studies at Harvard University

Dmitry Gorenburg, Senior Research Scientist in the Strategy, Policy, Plans, and Programs Division of the Center for Naval Analyses; Associate at the Harvard Davis Center for Russian and Eurasian Studies

Timothy Frye is the Marshall D. Shulman Professor of Post-Soviet Foreign Policy at Columbia University. He is the author of Brokers and Bureaucrats: Building Markets in Russia, which won the 2001 Hewett Prize from the American Association for the Advancement of Slavic Studies, and Building States and Markets after Communism: The Perils of Polarized Democracy, which won a Best Book Prize from the APSA Comparative Democratization section in 2010; and Property Rights and Property Wrongs: How Power, Institutions, and Norms Shape Economic Conflict in Russia, which was published in 2017. His most recent book, Weak Strongman: The Limits of Power in Putin’s Russia, will be published by Princeton University Press in April 2021.

Oxana Shevel is an Associate Professor of Political Science at Tufts University, current President of the American Association for Ukrainian Studies (AAUS), and an associate of the Harvard Ukrainian Research Institute and of the Davis Center for Russian and Eurasian Studies at Harvard University. Shevel’s current research projects examine the sources of citizenship policies in the post-Communist states; church-state relations in Ukraine; the origins of separatist conflict in Donbas; and memory politics in post-Soviet Ukraine. She is the author of Migration, Refugee Policy, and State Building in Postcommunist Europe (Cambridge University Press, 2011), which examines how the politics of national identity and strategies of the UNHCR shape refugee admission policies in the post-Communist region. The book won the 2012 American Association of Ukrainian Studies book prize. Shevel’s research appeared in a variety of journals, including Comparative Politics, Current History, East European Politics and Societies, Europe-Asia Studies, Geopolitics, Nationality Papers, Post-Soviet Affairs, Political Science Quarterly, Slavic Review and in edited volumes. She also currently serves as Vice President of the Association for the Study of Nationalities (ASN), a country expert on Ukraine for Global Citizenship Observatory (GLOBALCIT), and a co-chair of the Post-Communist Politics and Economics Workshop at the Davis Center at Harvard.

Michael Kofman serves as Research Program Director in the Russia Studies Program at CNA and as a Fellow at the Kennan Institute, Woodrow Wilson International Center in Washington, DC. His research focuses on the Russia and the former Soviet Union, specializing in Russian armed forces, military thought, capabilities, and strategy. Previously, he served as a Program Manager and subject matter expert at National Defense University, advising senior military and government officials on issues in Russia and Eurasia. Mr. Kofman is also a Senior Editor at War on the Rocks, where he regularly authors articles on strategy, the Russian military, Russian decision-making, and related foreign policy issues. Mr. Kofman has published numerous articles on the Russian armed forces, security issues in Russia/Eurasia, and analyses for the US government. He holds an MA in International Security from the Edmund A. Walsh School of Foreign Service at Georgetown University.

Sam Greene is Director for Democratic Resilience at the Center for European Policy Analysis (CEPA). Sam is also a Professor of Russian Politics at King’s College London. Before joining CEPA, he founded and directed the King’s Russia Institute for ten years. Prior to moving to London, Sam lived and worked for 13 years in Moscow, as Director of the Center for the Study of New Media & Society at the New Economic School and as Deputy Director of the Carnegie Moscow Center. He is the author of Moscow in Movement: Power & Politics in Putin’s Russia (Stanford, 2014) and Putin v. the People: The Perilous Politics of a Divided Russia (Yale, 2019, with Graeme Robertson), as well as numerous academic and policy papers. An American and British citizen, Dr. Greene holds a PhD and MSc from the London School of Economics and a BSJ from Northwestern University and is an elected fellow of the British Academy of Social Sciences.

Anastasiia Vlasenko is a postdoctoral fellow at the Jordan Center for the Advanced Study of Russia who studies electoral politics and democratization with specialization in politics of Ukraine and Russia. Her monograph project, ‘The Electoral Effects of Decentralization: Evidence from Ukraine’ investigates how decentralization reform affects electoral mobilization and diversity in a weakly institutionalized democracy. Vlasenko is particularly interested in transitional period reforms, propaganda, legislative politics, and forecasting. Her research has been published in the Journal of Politics.  She received her Ph.D. from the Department of Political Science at Florida State University in 2022, M.A. in Political Science from Florida State University in 2018, M.A. in International Relations from New York University in 2016, and M.Sc. in European Affairs from Lund University in 2013, and B.A. in Political Science from the National University of Kyiv-Mohyla Academy in 2011. In 2020-2021, she worked at Hertie School in Berlin as a visiting researcher. In 2014-2016, Vlasenko was a Fulbright scholar at New York University. At Florida State University, she taught courses on comparative politics and post-Soviet studies.

Dmitry Gorenburg is Senior Research Scientist in the Strategy, Policy, Plans, and Programs division of CNA, where he has worked since 2000. Dr. Gorenburg is an associate at the Harvard University Davis Center for Russian and Eurasian Studies and previously served as Executive Director of the American Association of the Advancement of Slavic Studies (AAASS). His research interests include security issues in the former Soviet Union, Russian military reform, Russian foreign policy, and ethnic politics and identity. Dr. Gorenburg is author of Nationalism for the Masses: Minority Ethnic Mobilization in the Russian Federation (Cambridge University Press, 2003), and has been published in journals such as World Politics and Post-Soviet Affairs. He currently serves as editor of Problems of Post-Communism and was also editor of Russian Politics and Law from 2009 to 2016. Dr. Gorenburg received a B.A. in international relations from Princeton University and a Ph.D. in political science from Harvard University.