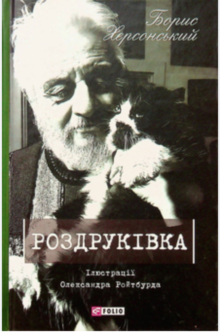 This is Part II in a three-part series. Part I may be found here, and Part III will follow tomorrow, 12/8.

At the peak of the Euromaidan, which Khersonskii wholeheartedly supported, his linguistic position was very different from the one he occupies today. In his reaction to the February 23, 2014 Rada vote for a law stripping Russian of the status of regional language, Khersonskii defended the bilingualism law for the sake of his first language, Russian. He sought to distinguish between Russian poetic language and intellectual discourse, on the one hand, and Russian imperialist and military language, on the other. He disagreed with the idea that the Russian language itself was an “invader,” arguing against an over-generalizing understanding of Russophone literature.

According to Khersonskii, Russian played a seminal role in multilingual Ukraine as a language of interethnic communication. Yet very soon, his view began to shift: already in May 2014, he suggested that Russian might be only temporarily necessary. By 2017, much had changed. Though he had previously denied the very possibility, Khersonskii began to acknowledge the infection of Russian by anti-Ukrainian imperialist usage. In a post from May of that year—which, like many of the ones that followed, appeared in both Russian and Ukrainian—Khersonskii remarked:

“Sorrowful exclamations of the form ‘Yes, the Russian Federation is an aggressor nation, but what does that have to do with Russian culture and the Russian language?’ have become cliché. What can one say to this? Culture is unthinkable apart from its speakers. […] When [Russian nationalist author and commander of a separatist battalion in Eastern Ukraine] Zakhar Prilepin commands, ‘Let’s go!’ and his ‘rebel’ subordinate starts shooting at Ukrainian soldiers, can we really say there’s no link to his prose? There is a link, and a very direct one at that. Does not the perception of a language depend on what, exactly, people use it to say? With what particular emphasis and intonation do many, many people speak Russian? And what do they talk about…? An unjust state power that subjugates its own people with the help of a manipulative mass media vulgarizes and destroys its own language and its own culture.”

Immediately after Euromaidan, Khersonskii began to reflect on his own precarious position as a Russophone patriot of Ukraine who had published his poetry primarily in Moscow and St. Petersburg. By analogy with émigré Croatian writer Dragica Rajčic, who wrote in German despite, as Khersonskii put it, never truly mastering the language, he wondered whether, were he to switch to a “more or less mutilated Ukrainian,” he might actually end up “better understood.” Yet at this stage, no amount of self-estrangement could overcome the fact that, by his own admission, Khersonskii had little practice writing poetry in Ukrainian. Soon, however, Khersonskii inverted this perspective, describing himself as a sequential bilingual who had acquired Ukrainian as a second language in school, and as a practicing B → A (foreign to native) translator from Ukrainian to Russian:

“From the second through the tenth grades I diligently learned Ukrainian in school and am grateful to my teachers […]. My studies in Stanislavov (Ivano-Frankovsk) helped me master conversational Ukrainian, more or less. But since then, I have not had practice communicating in Ukrainian. At the same time, I read a lot of poems and prose in Ukrainian, both officially published and in samizdat. Only over the last few years, due to the fact that I have come to know and make friends with people for whom Ukrainian is their native language—mostly excellent writers and poets—I have slightly improved my speech. But, of course, I have never written poems in Ukrainian, though I have translated some Ukrainian poets into Russian.”

Nevertheless, Ukrainian entries began to appear on Khersonskii’s Facebook page right after Euromaidan, for example on February 26, 2014, with a captatio benevolentiae for imperfections and Russianisms in his Ukrainian. A year later he reports (in Russian) on his acquisition of a Ukrainian rhyming dictionary and continuous improvements in his spoken Ukrainian. Doubts about the quality of his spoken Ukrainian still persist in 2017. What is new is an explicit description of his development in the direction of Ukrainian:

“The new stage of writing in Ukrainian began not so long ago. At the beginning, I translated poems from Ukrainian, then into Ukrainian, including my own verses, i.e. self-translations, but I call them ‘the Ukrainian version.’ For several years now, I have been writing in two languages.”

Embracing his second language as a tool for both self-translation and original writing enables Khersonskii to distance himself from his previous attitude, which was connected with a Russia-centered poetic practice. In January 2019, he wrote of the “crisis” the ongoing war had caused in his “worldview and even identity.” Whereas he was once a predominantly “Russian-language poet” who “published with Russian publishing houses, received Russian literary prizes, and took part in Russian cultural events,” he now confessed to feeling like “a Ukrainian poet writing in Russian and Ukrainian who translates verses not only from Ukrainian into Russian, which was still the case three years ago, but also from Russian into Ukrainian.” He reported studying Ukrainian “diligently” and applying himself “every day, despite my advanced years.” The post concludes with a vow not to “participate in cultural events that take place on Russian territory” or even to travel there “so long as Putin is in power and the concept of a ‘Russian World’ remains in force.” By February of 2019, Khersonskii declared himself bi-native in both Russian and Ukrainian. This statement becomes the culmination of a series of posts that began in late 2014, which contained progressively more Ukrainian-language content.

Whereas, according to a 2014 interview, code-switching to Ukrainian for prose and poetry initially seemed impossible to Khersonskii, in 2016, following the publication of the bilingual collection of essays Klaptykova kovdra, the poet declared it a matter of will for a “Russophone person” to “make a different decision and write in Ukrainian.” Soon, he had elevated this “decision” to the status of an “obligation,” writing that he “took the beginning of the war as a signal” that he no longer had the “right not to speak Ukrainian.” Ultimately, mastering Ukrainian became a patriotic obligation for Khersonskii. In late 2016, he wrote that “a citizen of Ukraine is obliged to know the state language, to respect and to love it.” If a Ukrainian citizen’s life circumstances aligned such that they spoke only Russian, they are “simply obliged” to “master the state language to that degree he is able to.” He himself, Khersonskii writes, has “chosen that very path.”