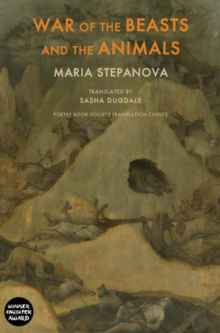 Alex Braslavsky is a first-year Ph.D. student in the Department of Slavic Languages and Literatures at  Harvard University.

“I had her voice in my head. […] It felt like a long conversation in her kitchen.” – Sasha Dugdale, on translating Maria Stepanova

The recent release of Sasha Dugdale’s translation of Maria Stepanova’s War of the Beasts and the Animals follows closely on the heels of her translation of Stepanova’s documentary novel Memory of Memory earlier this year. In a recent conversation with Oliver Ready and Catriona Kelly, Dugdale discussed her translation of Memory of Memory, remarking that although the text is complex and she had many misgivings about taking it on, because much of her translation practice is informed by speaking aloud, and because she’s had many long kitchen-table conversations with Stepanova — who happens to be her good friend — she was able to render the text with Stepanova’s voice in her head. Some may argue that there is a conflict of interest in translating a friend, but Dugdale’s deft translations suggest that friendship can be a source for a powerful, mutual, and reflexive embodying of the written word, particularly between two women enjoy defecting from the word as much as they do living in it.

If Memory of Memory underscores the futility of memorials and defends the right to oblivion, particularly where Jewish collective memory is concerned, its sister publication in War of the Beasts and the Animals redoubles Stepanova’s voice, affording Dugdale the joy of making her own swift decisions as Stepanova’s contemporary. In her foreword to the collection, Dugdale refers to Grigory Dashkevy’s concept of the poem’s pre-textual body, which Dugdale and Stepanova alike feel free to inhabit as they see fit. The translation process is made visible in Dugdale’s rendering, which ironically references Ezra Pound’s “In a Station of the Metro” (“apparition of these faces / in the metro lamps / on a wet black wire” in “Spolia”), T.S. Eliot’s “J. Alfred Prufrock,” and idiomatic expressions unique to English like “last one is a rotten egg” and “this little piggy.” Some of her wordplay (“enough, I said, I’m prigov you prigs can fuck off” in “Spolia”) signals Dugdale’s presence and participation in the poetic process in a manner that extends beyond direct reproduction.

If the “pre-textual body” that affords this literary occasion is the kitchen table, Dugdale really does stand by her word in voicing her translation. Dugdale’s foreword mentions an interview with Korean poet Kim Hyesoon from her time as editor of Modern Poetry in Translation, in which Hyesoon asked the pertinent question, “We know that resistance is not outside of power, don’t we?” The reader then encounters some of the collection’s first lines, which at first glance seem to oppose Hyesoon’s powerful political statement…

its kiss is loveless, it lies motionless

…That is, until we realize that the poem is ironic. The later reference in the same poem to the “good soviet translator” who is “careful [and] unadventurous” seems in essence to give Dugdale meta-permission to cause a ruckus, in the wake of the Soviet ephemera that Stepanova’s poetry instantiates. The poem invites its translator to slide from the Soviet directly into the postmodern, and she does. In conversation with Oliver Ready, Dugdale mentioned that “sleight of hand” was an aspect of her process, and indeed, this mode alerts the reader to Dugdale’s own presence within the translated poem. Whether by “sleight of hand” or otherwise, we know Dugdale is there, not least because of the British idiom she deploys:

says the dead to the dead

says the killed to the killer

She patterns the fissuring of language to staccato effect:

Where Stepanova calls not for the breaking of words, but for healthy neologisms, Dugdale follows along (see “wordeed / wordtree / word wood” in “Spolia”). Any combination of language breaking and conjoining is also well-matched (“anyone-without-an-I / is permitted a non-i-ppearance / wants libert-i” in “Spolia”).

Other moments are interestingly faithful to the Russian, to the point of keeping the transliterated version of the word intact. The word “smetana” is kept for its sonic qualities, for example, although it is followed by a footnote that tells us that the word “is Russian sour cream.” The note prevents the last line of the poem from having its due silence, according with the satirical, reportage-like moments from later in the collection (“You want this park to like you, / You, and those plump little brides, / But can you be sure your betrothed / Is no frog, and doesn’t eat flies” in “Girls, Singing”). Dugdale is at her best when she liberates her lyrical ear:

With the inflow of a draught

At the hour when an empire’s ballerinas

Stand wearily at the barre

The ever-so-slant rhymes between “cooling” and “ballerinas,” “draught” and “barre,” allow us to be lulled by her language. The alliteration enables plosive moments that feel at once blurted-out by the speaker and controlled on the part of the poets:

in the big brother house a fight opens like a flower

shut the fuck up why don’t

Dugdale has her reader by the scruff of the neck. Throughout the collection, we see Dugdale organically elide her own disappearance as a translator, instead enabling the poem to be a historic space of jest between two great living poets.