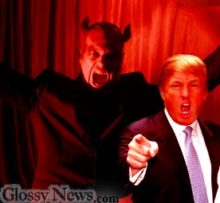 It’s never a good sign when real life resembles a Dostoevsky novel. Yet recent developments in our contemporary political scene have reminded many of us that love Dostoevsky of his most political novel, Demons. If Brothers Karamazov, with its closing banquet of reconciliation amidst grief and loss, is Dostoevsky’s novel we most need to read in our time of violence and division, Demons is his novel that most directly reflects our time.

Consider for a moment the cast of characters in Demons and their parallels to the present. Since this idea was first floated on Facebook (by Anne Lounsbery), some fun comparisons have already been noted. For instance, Pyotr Verkhovensky has been likened to overseas Wikileaks schemer, Julian Assange, manipulating events from behind the scenes. On the other hand, in his most bombastic moments, Trump resembles the performative and rambunctious Captain Lebyadkin, who knows how to get a rise out of a crowd. Looking for a Hillary Clinton parallel, one finds two older matriarchal figures, Julia von Lembke, or Varvara Stavrogina. And as for Nikolai Stavrogin, my personal favorite is to compare him to Paul Ryan – because he knows better and could intervene, but chooses to maintain his problematic neutrality anyway. As for the bad fathers, perhaps John McCain, who helped promote Sarah Palin and her corrosively divisive politics, makes a good Stepan Trofimovich; or Roger Ailes and other Fox news conservative commentators? If you’ve read the novel, I’m sure you can play this game all by yourselves and better than I can!

There also more significant parallels between Dostoevsky’s novel and our reality. Russia in the late 1860s and 1870s, around the time Dostoevsky published his novel, was terribly chaotic. Alexander II’s Great Reforms, which liberated the serfs and aimed to modernize the country from above by dragging it out of the caste-like estate system, produced socioeconomic problems and great political discontent. In a reversal of our political landscape and right wing discontent with the Affordable Care Act, in tsarist Russia, it was left-wing political figures that grew disaffected with the reforms and felt that no meaningful change could come from the government. Indeed, opposition to the status quo was probably the only unifying principle behind the myriad left-wing political factions and revolutionary groups. For some, like Pyotr Verkhovensky’s historical double, Sergei Nechaev, or for his one-time mentor, famous Russian anarchist Mikhail Bakunin, destruction became an end in itself larger than all ideologies. In a famous statement, Bakunin exhorted that “the passion for destruction is a creative passion, too,” since new worlds could only be born after old worlds were destroyed. Along these lines, Bakunin praised rebels from Russia’s past that unleashed violence and destruction like Stenka Razin or Yemelyan Pugachev.

In Demons Dostoevsky captured this larger chaos and anti-establishment spirit by showing one man, Pyotr Vekhovensky, stirring passions in a provincial society and destabilizing the local order to the point that arson and several murders eventually take place. Leaving aside his pernicious terrorist acts for a moment, Pyotr’s political tactics and efforts to control the mood and opinions of the public, coupled with his own desire for self-aggrandizement, suggest disturbing parallels between Russia in the 1870s and billionaire Donald Trump’s campaign for president in our time.

The novel has a number of ideological characters, since most Russian revolutionary groups from the period had strong ideological convictions. But what is most relevant about Demons in the context of our time is not its ideologues, but the anti-intellectual, anti-ideological, and impulse-driven nature of Pyotr’s rebellion. Dostoevsky appropriated the nihilism theme from Ivan Turgenev and proceeded to create a pure nihilist in Pyotr, who appeals to people’s impulses and incites public scandals that grip everyone’s attention. Life in town turns into a spectacle, as he inspires disorderly behavior and general disrespect for everyone and everything – including disrespect for faith and spirituality. If the novel’s ideological characters are consumed by their ideas, Pyotr’s followers are possessed by a recklessness that defies all conventions of decency, leading to a breakdown of basic civility. Their pranks, insults, and disorder may seem harmless in and of themselves, but Dostoevsky stages this general decline in the level of public discourse as a preamble of sorts for the violent and destructive acts at the end of the novel.

Thinking back, one is inadvertently reminded of the current anti-establishment vein among Donald Trump’s supporters. It is hard to determine what motivated some fourteen million Americans to vote for Donald Trump in the Republican primaries. Few can truly pinpoint Trump’s ideological positions, and he frequently seems to change his mind or claim he did not mean what he said. So what brings his supporters together? For the most part it seems to be an emotional appeal. Unlike most political candidates, Trump speaks off the cuff, saying whatever he wants, and at once reflecting and stoking the anger and pessimism of his supporters through his manner. For instance, just last week he said he wanted to “hit” the speakers criticizing him at the DNC convention because it would feel good to do so. Admittedly, it appears he meant hitting as a verbal strategy. Still, in his voice we hear anger, a need to provoke, and a deep-seated irreverence, particularly toward the status quo. His supporters are angry with the establishment and seem empowered by this irreverence. Perhaps without even thinking about his policies, they are viscerally drawn to the spectacle of his candidacy, like the group of townspeople following Pyotr Verkhovensky in Demons who delight in the gossip and scandals he helps create.

The novel’s ending might have a sobering effect on the contemporary reader. Bakunin’s anarchic vision of creative destruction, which hovers in the background of Demons, comes to full fruition during an onslaught of terrorism. As Pyotr walks off free and gets away with murder, many individuals in town die or lose their minds. Dostoevsky has been criticized for hyperbole and painting caricatures of the young generation in Demons, but his main goal was to show his reading public, even if through a glass darkly, just how bad things could get if they did not pay attention.

The notorious Trump campaign motto, “Make America Great Again,” might be phrased as a positive endeavor, but in many respects it is its own form of creative destruction – it means undoing the current state of affairs, in order to recreate a nostalgia-tinged version of past America. Trump’s supporters do not openly preach destruction and anarchy, but several people have already been attacked at his rallies. At one point in Demons crowds crush a female protagonist (Liza) to death because they falsely believe her responsible for what has happened to their town. When audiences scream, “Lock her up” about a former US First Lady and former Secretary of State, I wonder whether they aren’t coming dangerously close to this kind of primal violence. If Dostoevsky’s novel is the nightmare scenario, and perhaps intentionally so, he tied that scenario to unhinged impulses and the breakdown of civility. We might revisit his words and pay close attention.