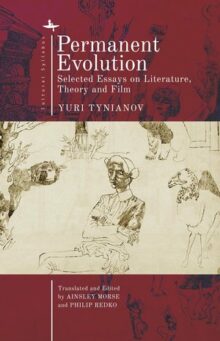 Editor’s note: The volume by Formalist critic Yuri Tynianov from which the below excerpt is drawn is titled Permanent Evolution: Selected Essays on Literature, Theory and Film. It was published in September 2019 with Academic Studies Press.

Ainsley Morse teaches at Dartmouth College and translates Russian and former Yugoslav literatures. Other recent publications include Andrei Egunov-Nikolev’s “Soviet pastoral” Beyond Tula (ASP), also excerpted on the “All the Russias” blog, and, with Bela Shayevich, Kholin 66: Diaries and Poems by Igor Kholin (UDP) and Vsevolod Nekrasov’s I Live I See (UDP 2013).

Philip Redko is a translator, editor, and teacher. He holds a PhD in Slavic Languages and Literatures from Harvard and lives in Cambridge, Massachusetts.

Translator’s note: Tynianov’s 1924 “Interlude” [Promezhutok] is a revue of contemporary poetry to date. From the vantage point of today, his diagnosis—that poetry is in retreat—seems incredible, given that he profiles a dazzling array of early twentieth-century giants: Khlebnikov, Akhmatova, Esenin, Mayakovsky, Mandelstam, Pasternak, Khodasevich, and others. But Tynianov’s insightful, often unsparing comments reveal these canonical figures in a contemporary light, as poets in process, making discoveries but also stumbling—which releases them from the shackles of greatness and lets them blunder. As Tynianov writes about Pasternak: “I will refrain from making predictions about Pasternak. Ours is a high-stakes time, and I don’t know where he’s headed (which is a good thing—it’s bad when a critic knows where a poet is headed).”– Ainsley Morse.

These days writing about poems is almost as hard as writing them.[1]

And writing poems is almost as hard as reading them. Such is the vicious circle of our time. There are fewer and fewer poems being written, and what is really front and center right now is not poems, but poets. And this is not nearly as inconsequential as it may seem.

Three years ago prose ordered poetry to leave the premises once and for all. The poets cleared out in a sort of panic, and prose writers moved in and occupied all the empty seats. Along with this development, the number of poets fell dramatically, while that of prose writers grew. Many of these writers did not actually exist yet, but nevertheless were considered wholly existent and, subsequently, really did come to exist. There was a rush; these were premature, hurried births—the Serapion Brothers, for example, were translated into Spanish long before they wrote anything in Russian.[2]  We could all see that prose was victorious, poetry was in retreat, and for some reason we were all happy about it (those poets’ evenings had really gotten old). But what the point of it all was, what this victory might mean, and where poetry’s retreat would ultimately take it—we somehow didn’t think about any of that. Now poetry has fully “retreated,” and the situation has turned out to be rather complicated.

The fact remains: prose won. In the past, when a reader would pick up a journal or an almanac, he would immediately rush to the poems and, only after he’d cooled down a bit, skim through the prose. The reader of a more recent vintage carefully avoids the poems as if they were comrades long past their prime, and rushes headlong for the prose. Instead of poetesses there are now prosettes. (The very newest readers have started to avoid both the poems and the prose. These readers are still timid, still won’t admit to it; and yet, in a way, they are the most peculiar of all—they go straight to the current events, the reviews, the editorials—to the journalistic back alleys that are beginning to point toward a new type of journal.)

So, “our prose is blossoming.” This situation is now established, so to speak, and I have no intention of challenging it. According to critics these days, writing a short story no worse than Tolstoy is not so difficult. And prose production really is growing, while poetic production is falling. The watches of prose writers and of poets tick differently. The time of a poem is no longer determined by the day it appears; the time of prose is determined by cash advances. And meanwhile, the relationship between the victors and the defeated is, I repeat, rather complex.

These days, prose exists through tremendous inertia.[3]  This inertia can only be overcome with a huge effort, bit by bit, and making the effort has become ever more difficult and, evidently, ever more pointless. Sometimes it seems that inertia itself, rather than any particular writer, has written a short story and inevitably ended it with the death of the protagonist, or at least of Europe.[4]  For poetry, the period of inertia has ended. Belonging to a school or holding a poetic passport won’t save the poet any longer. The schools have disappeared, the movements have quite predictably ceased to be, as if on command. They gained prominence in geometric progression, became differentiated, and fell apart; subsequently, the self-determination of minor poetic nationalities began to take place within the confines of individual apartments and, finally, each poet was left to his own devices.

Now all of this belongs to the distant past, but just a couple of years ago even the Emotionalists, who had declared love the best thing in the world, along with some other more or less joyful feelings—I think even they were considered, if not a school, then at least a movement.[5]

This phenomenon of schools being replaced by solitary individuals is characteristic of literature overall, but the rapid pace of succession, the brutality of the struggle, and the swiftness of the fall—this is the tempo of our age. The nineteenth century was slower. There are no poets now who would not outlive their movements—Blok’s death was all too predictable.6

Poetic inertia has ended; the groupings have mixed together; the scale has grown immeasurably broader. Poets who have absolutely nothing in common are joining forces; names remote from one another are standing side by side. The ones surviving are the solitaries.

And right now, the stakes for poetry are high. Poetry is speech transformed; it is human speech that has outgrown itself. Language in poetry has thousands of unexpected shades of meaning; poetry gives language a new dimension. New poetry is new vision. And the growth of these new phenomena happens only in the interludes when inertia loses its grip. The action of inertia is, essentially, all we know—in skewed historical perspective, an interlude without inertia seems like a dead end. (Every innovator is ultimately working for inertia; every revolution is produced for the canon.) But there are no dead ends in history. There are only interludes.

One of these solitary poets told me that “every hour changes the situation.” Poetry itself has become a favorite topic for poets. The better half of Pasternak’s poems are about poetry. Mandelstam writes about his “dear sound sequence,” Mayakovsky about his “poetic blinders.” It’s hard to say anything about works, fully formed poems, let alone about whole books during an interlude. The poets passing through the interlude make for an easier subject.

[3] Tynianov tends to use the words stikh (verse line, line of poetry) and stikhi (verses or poems), rather than poeziia (poetry) or stikhotvorenie (a single poem). See Verse / Poetry in Terms.

[4] The Serapion Brothers, who borrowed their name from the German Romantic writer E. T. A. Hoffmann, was a group of early 1920s prose writers, including, among others, Evgenii Zamiatin, Mikhail Zoshchenko, Tynianov’s brother-in-law Veniamin Kaverin, fellow Formalist theorist Viktor Shklovsky, and the poet Nikolai Tikhonov. For more on the latter, see section eleven of this article.

[5] Tynianov uses the word inertsiia, a calque from the Latin that means, as in English, “inertia”—the continuation of matter in its state of rest or uniform motion. Unlike English, however, inertsiia in Russian also has the colloquial meaning of something happening automatically: “I started boiling water to do laundry but by inertia [po inertsii] made myself a cup of tea.” The latter meaning is important for Tynianov, in light of the central importance of “automation” / “automatization” in Formalist thought (note, however, that Tynianov does not use the word “automatization” per se). For consistency’s sake, we have used “inertia” throughout, but readers should be aware that the idea of uniform motion in a straight line is more important here than that of “inertness” or lack of movement; for this reason, in some contexts the English word “momentum” (“Prose is being carried along by its own momentum”) might better approximate the meaning.