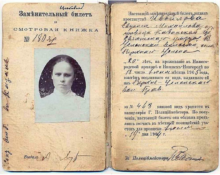 This week, All the Russias is delighted to feature excerpts from Colleen Lucey’s Love for Sale: Representing Prostitution in Imperial Russia, out later this month from Cornell University Press. The below segment derives from the book’s second chapter, titled “Safety Valves of Social Passions: Regulating Commercial Sex.”

Colleen Lucey is assistant professor of Russian and Slavic Studies at University of Arizona.

“Prostitution is a Gangrene”: Vsevolod Krestovsky’s The Slums of Petersburg

“We have to remember one thing—[prostitution] is a gangrene plaguing Russian society; gangrenous sores cannot be attractive and aesthetic.”

—Vsevolod Krestovsky, The Slums of Petersburg

Krestovsky’s best seller The Slums of Petersburg, published serially between 1864 and 1866 in the journal Notes of the Fatherland (Otechestvennye zapiski), depicts the horrors of urban living, including the misdeeds of murderous philanderers and children trafficked into the sex trade. Inspired by Eugene Sue’s The Mysteries of Paris (Les Mystères de Paris, 1842–43), Krestovsky researched the underbelly of St. Petersburg for his monumental novel, outlining the most sensational elements for a curious public. The plot contains many twists and turns, but the central focus is on the manipulations of the Shadursky family and the fates of their illegitimate children, including the young and destitute Masha, who eventually turns to sex work as her only means to survive in the northern capital.

The precision with which Krestovsky portrayed the brothels and prisons of St. Petersburg caught the eye of the Tret’e otdelenie, the Third Section of the tsar’s chancellery, which included the secret police. At the behest of the Third Section, the censor demanded that editors remove the novel’s first installment from the presses. One member of the Third Section recommended arresting Krestovsky for the inclusion of a particularly horrific incident, which was “so obscene” that it “offended all feelings of morality.” The censor objected to Krestovsky’s inclusion of a sadistic lottery in which the winner receives the right to have first “dibs” on Luiza, a virgin recently recruited to the brothel. Krestovsky compounds the debauchery by having the girl’s father, who is employed as the brothel’s piano player, provide musical accompaniment to what he realizes—only too late—is his daughter’s initiation into brothel life. Hoodwinked by the establishment’s malicious and conniving madam, Aleksandra Pakhomovna, Luiza agrees to join the brothel. Forced to pick the “winning” ticket herself, Luiza selects number 48 and hears the answer “Mine!” from a man with a “beastly voracious” voice. He subsequently drags her off to the applause and cheering of all in attendance. Krestovsky’s lurid description demonstrated for readers the depravity of the aristocracy, which infected all segments of society with its insatiable sexual lust. The novel depicts how the Shadursky family combines seduction and treachery with outright exploitation of the weak and defenseless. Central to the spread of evil in St. Petersburg is the scourge of commercial sex, the “gangrene in Russian society,” as Krestovsky terms it. Taking it upon himself to explain to readers what they themselves “have never seen,” Krestovsky de scribes the root of “the worst, most ruthless, debauched slavery, that leads to the complete annihilation of a woman’s individuality along with all her rights” and lowers her “to the level of barbarity that borders on complete idiotism.” Brought to the very depths of human suffering, these women eagerly welcome death. Such is the case for Masha, who, upon coughing up blood, realizes that her death is imminent, and joyfully exclaims, “Tuberculosis! At last! Thank God!”

Warning his reader not to take offense at the subsequent description of brothel life, Krestovsky describes the position of brothel workers vis-à-vis the judicial system. “In relation to fallen women the law is placed in a precarious position,” because, he explains, “[the law] cannot sanction depravity, but allows it, endures it as an inevitable evil, yielding a huge mass of the population for this cause.” The subsequent chapters vividly demonstrate to readers how women enter brothels out of desperation, immediately become indebted to their madams, and find themselves servicing clients six days a week. Some women manage to “cultivate their inner morality and femininity” by erecting a barrier between their true spiritual selves and their “immoral” brothel work. Such division produces “a strange duality”: “In one and the same creature is combined woman—in the best meaning of the word—and a harlot [publichnaia razvratnitsa].” Krestovsky describes this state of being as inherently contradictory: how can a woman be both virtuous and vile? In the traditional understanding, a woman could be either sinful or saintly, mother or whore. That the St. Petersburg sex worker manages to combine both poles of femininity (the moral and the depraved) presents a problem for Krestovsky.

While Krestovsky envisions this duality as paradoxical, it is commonly found in Russian depictions of women employed in commercial sex. The Madonna/ whore binary appears in Nikolai Gogol’s depiction of the neznakomka (unknown woman) in “Nevsky Prospect,” in the character Sonia in Fyodor Dostoevsky’s Crime and Punishment, and will haunt subsequent iterations of the fallen woman’s plot in works by Vsevolod Garshin, Leo Tolstoy, and Leonid Andreev. From a psychological perspective, these male authors express great anxiety over the sold woman’s sexual difference; she is both enticing and threatening in her sexual awareness. As Charles Bernheimer puts it, the “prostitute is imagined as animalistic, intense, a sensual feast for the blasé upper class male. But almost immediately her sexuality becomes threatening.”21 The eroticism of sex workers challenged the conventional understanding that women lacked libido; a woman’s engagement in sexual activity was purely for reproductive purposes, not for her own physical gratification.

What irks Krestovsky and his contemporaries tells us something crucial about the conceptualization of female sexuality in the 1860s. For male writers, the fact that a woman could be sexually active outside marriage while preserving her morality brought the entire social contract into question. The two components constructing femininity—marriage and motherhood—contributed to woman’s status as morally superior to men. But if a woman could cultivate her “inner life and morality,” as Krestovsky puts it, while engaging in sex with multiple partners and avoiding child-rearing, then what exactly was the difference between honest women and harlots? The blurring of these categories produced anxieties that threatened to unravel not only the differences between categories of women but the construction of the family unit. As a means to sublimate these fears, authors relied on sensational plots that culminated in the sex worker’s untimely death. By expelling her body from the narrative, writers could reestablish the social structure and women’s place in the traditional patriarchal order. Writers thus employed strategies to encapsulate the eroticized female body in narratives that contain hypersexuality.

Krestovsky’s The Slums of Petersburg won immediate commercial success, with avid readers complaining about the difficulty in obtaining their own copies. But while the public eagerly consumed Krestovsky’s story of moral depravity, the reception among the literati was far from positive. The editorial staff of the popular weekly journal The Spark (Iskra) devoted an entire column, featured over several issues, that poked fun at the melodramatic content in The Slums of Petersburg (see figure 2.1). With ample caricatures and humorous commentary, satirists pointed out the absurdity of the plot and the unbelievability of characters like Masha. The Slums of Petersburg morphed into a “novella about a coffee cup, a fork, and a silver ruble,” with a caricature featuring a hysterical woman catching fire from a cup of hot coffee. Plot points are exaggerated and reformulated to present the novel as a mishmash of crimes and intrigue. Heart-wrenching death scenes, including Masha’s, devolve into melodramatic spectacle. Although the editors at The Spark mocked Krestovsky for his convoluted plot and exaggerated depictions, his tale of St. Petersburg debauchery made a lasting impact on the book market. If imitation is the sincerest form of flattery, Krestovsky had a cabal of writers following in his footsteps. Texts modeling themselves on his best seller appeared on the market in an attempt to repeat the original’s fame.22 Following Krestovsky’s lead, writers set their stories and novels within the urban decay of St. Petersburg; in these narratives, a naive young woman who has recently arrived to the capital cannot survive on the meager wages offered for her work and thus inevitably turns to sex work. Even as late as 1910, works like The New Petersburg Slums: Sketches of Life in the Capital (Novye peterburgskie trushchoby: ocherki stolichnoi zhizni) appeared in bookstores, thus proving that the tales of criminal mothers, duped widows, and girls sold into the “white slave trade” remained popular with readers.

Paradoxically, even as The Slums of Petersburg made Krestovsky famous, it tarnished his status as a writer. His popularity slowly waned toward the end of the 1860s, in part because established writers dismissed the novel as charlatanism. Ivan Turgenev reportedly condemned The Slums of Petersburg as “pure nonsense,” whereas others, including the influential publisher Aleksei Suvorin, thought it little more than direct transcription of daily life. Although Dostoevsky initially regretted missing the opportunity to publish Krestovsky’s series in his own journal, nearing the 1870s his attitude toward the younger writer soured.24 And in general, Krestovsky’s subsequent conservatism alienated him from his former coterie of influential pochvenniki. Coming from pochva, the Russian word for “soil,” the pochvenniki (literally “men of the soil”) were a group of like-minded intellectuals closely associated with Dostoevsky’s journal Time (Vremia). Advocating for a “return to the soil,” the pochvenniki stressed the need for the educated classes to engage more comprehensively with the masses.

The position of impoverished women remained central to discussions among Russian writers, but it was clear that Krestovsky’s appeal to the masses angered the literary elite. In their view, what had traditionally been the topic of liberal-minded poetry by Nikolai Nekrasov and psychological prose in Dostoevsky’s novels was trivialized in boulevard literature. From the point of view of writers like Dostoevsky and Turgenev, these dime novels sensationalized the serious threat commercial sex posed to women and the family, which is why the next generation of writers coming of age in the 1870s and 1880s sought to distance themselves from boulevard prose as they took up the question of venal love in their fiction. For the author Vsevolod Garshin, the topic of commercial sex took on a personal importance. Believing himself the next great word in Russian literature, he used his prose to polemicize with medical “truths” about public women. Invigorated by debates on the nature of fallen women, Garshin authored two stories that openly polemicized with the state’s role in selling sex.