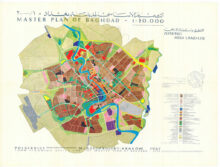 All the Russias is delighted to feature excerpts from Łukasz Stanek’s Architecture in Global Socialism: Eastern Europe, West Africa, and the Middle East in the Cold War, with permission from Princeton University Press. The below segment derives from the book’s epilogue.

Łukasz Stanek is a professor of architectural history at the University of Manchester, UK.

Eastern European officials wanted to see these working relation ships as specifically socialist and fundamentally different from Western attempts at exploitation of the former colonies. Such claims were used  in diplomatic offensives of the socialist countries in Africa and Asia and  by foreign trade organizations to discipline the professionals they sent  on export contracts. At times, Eastern European architects and planners  themselves referred to the discourse about socialist labor. For a few among them, this discourse helped to make sense of their deployment abroad,  while others used it to secure new commissions or to claim more resources  from the authorities back home. When interviewed today, some architects  contrast the professionalism of the traveling personnel from Eastern  Europe with the negative selection of their Western counterparts (“Failed in  London, try Hong Kong,” as a British saying went). Such statements might  convey their frustration with the unequal treatment they sometimes experienced from local commissioners in comparison to Western professionals, combined with pressures from state-socialist institutions.

Most, however, saw themselves on par with their Western peers, either as members of the  international architectural culture or, later, as part of the worldwide mobile  workforce: liquid, contingent, and “free” to be deployed everywhere. These  various and evolving readings notwithstanding, the export of architectural labor from socialist countries was consistently conditioned by the political  economy of state socialism, from the organization of architecture and construction in Eastern Europe, to the state monopoly on foreign trade.

The controversies around socialist labor point to what might be the main dilemma of this book: the relationship between the studied architectures and the project of socialism. This relationship was addressed by  means of the concept of socialist worldmaking, or visions of global cooperation practiced by actors from socialist countries against the delineations of  the world inherited from the colonial period and in competition with other projects of global cooperation after World War II. Socialist worldmaking  included, but was not limited to, the claim to the worldwide applicability of  the socialist path of development; the worlding of Eastern Europe, or the sharing with the developing countries of the Eastern European experience of overcoming underdevelopment, colonialism, and peripheriality; and collaboration within the world socialist system. So understood, socialist worldmaking informed the changing geographies, volumes, speed, distribution, and programs of architectural resources that were moved between Eastern Europe and the Global South.

In several of these locations, architectural resources were deployed  in programs of socialist modernization. This was the case in Ghana under Nkrumah, where architecture and the construction-materials industry  were reorganized with an aim to become integrated into a centrally  planned apparatus put in charge of state-led industrialization, collectivization of agriculture, and an egalitarian welfare provision. This architectural  production contributed to the undermining of inherited spatiotemporal divisions of the Ghanaian society and their redistribution according to the  new socioeconomic order envisaged by the Convention People’s Party. In  the Ghanaian mass media, this architecture was often acknowledged as a signifier of what a socialist everyday meant, thus staking out a field of debate that was relevant and meaningful for actors operating on the ground, who sometimes remember its empowering effects.

However, the review of the Soviet engagements in Ghana showed the  limits to the country’s socialist modernization, in particular in terms of  implementing the principles of central planning. Similarly, the emancipatory targets of the worlding of Eastern Europe were challenged both by  the increasingly mercantile motivations of the socialist countries in their exchanges with the Global South, and the ambiguities of Eastern Europe’s own colonial past. In turn, some of the core ideas of the world socialist  system, including that of the socialist international division of labor, were  directly undermined by the competition in the Global South between Comecon countries themselves. By the end of the Cold War, the export of socialism was rarely within the remit of architects, planners, and contractors from Eastern Europe, as exemplified by Energoprojekt’s  instruction not to involve foreign workers on export contracts in self management procedures.

Some readers may draw conclusions in the manner in which Western  Marxists assessed the urbanization in state-socialist Europe: as a failure  to fulfill the socialist promise of a new type of space.2 However, such whole sale critique of the engagements discussed in this book would obscure  their specificity and their emancipatory potential. What the preceding chapters showed was that the mobilities of architecture from Eastern  Europe made a difference in West Africa and the Middle East: both in the sense of having a huge impact on people’s everyday lives, and in a more  literal sense, of differentiating urbanization processes beyond the conse quences of the colonial encounter with Western Europe and the hegemony of global capitalism.

This book can be read as a history of such differentiated urbanization  in Accra, Lagos, Baghdad, Abu Dhabi, and Kuwait City. In the preceding  chapters, differences were understood not as essentialized particularities  of a specific place that lend themselves as candidates for cooptation into the colonial (or neocolonial) system of governance, or as opportunities  for capitalist value-extraction and commodification. But neither were  they theorized as resulting from grafting an original Eastern European  technology or a design concept in Africa or Asia, nor from adapting such technologies and concepts to the ontological irreducibility of these territories. Rather, difference was understood as divergence, contrast, disparity, and sometimes incommensurability or contradiction between the economic, financial, ideological, logistical, regulatory, and cultural regimes within and across which Eastern Europeans, West Africans, and Middle Easterners worked.

By aiming to make the most of such relational differences, the protagonists of this book practiced worldmaking — for example, by negotiating the  entrance protocols and gatekeeping procedures of competing networks of  architectural resources. Among such differences, I paid particular attention to those between the political economy of foreign trade in Comecon countries and the emerging global market of design and construction  services dominated by Western enterprises. Working across both systems provided incentives for the use of barter agreements, which resulted in the  Romanian practice of redrawing plans so that they could be constructed  by means of materials, technologies, and labor from Romania bartered for  crude oil. In turn, Polservice exploited the inconvertibility of the Polish  currency in a way that shaped the working conditions of Miastoprojekt’s  team in Baghdad. These conditions differed from those of previous foreign  planners in Iraq, both in terms of the size of the team, its composition, and  time spent in Baghdad, and in terms of their relationship to the Iraqi authorities and collaborators. These working conditions provided the Polish and  Iraqi planners with resources to produce a master plan that was embedded, empirical, interdisciplinary, consultative, and scenario-based.

Few in Baghdad attributed this character of the master plan to socialism, and even fewer would so describe its consequences, including the ways in which the plan was negotiated, implemented, modified, and, ultimately, how it guided the urban development of Baghdad. In other locations  revisited in the preceding chapters, too, differences that resulted from socialist worldmaking continue to be reproduced beyond their original association with socialism, and often in unexpected ways. Sometimes they result in accelerated development — for example, when a factory built  by Eastern Europeans in Ghana brought about training opportunities into remote locations and expanded the skills of the local people they could draw upon long after the factory was closed in the wake of Nkrumah’s fall.

At other times, they result in slowdowns and obstacles to rapid urbanization — for example, at the International Trade Fair in Accra, where  Nkrumah’s nationalization policies led to still unresolved conflicts around  land ownership. Elsewhere, they lay out distinct vectors of urbanization, as has been the case with the infrastructural grid of the International Trade Fair in Lagos. In turn, the wide area around the National Theater continues  to inspire new ways for imagining the future of Lagos, its transportation  networks, and its everyday economies. The concept of socialist world making provided a way to account for the genealogy of these differences, but the understanding of their reproduction requires new methods, new  hypotheses, and new concepts: as much a theoretical as a political task. 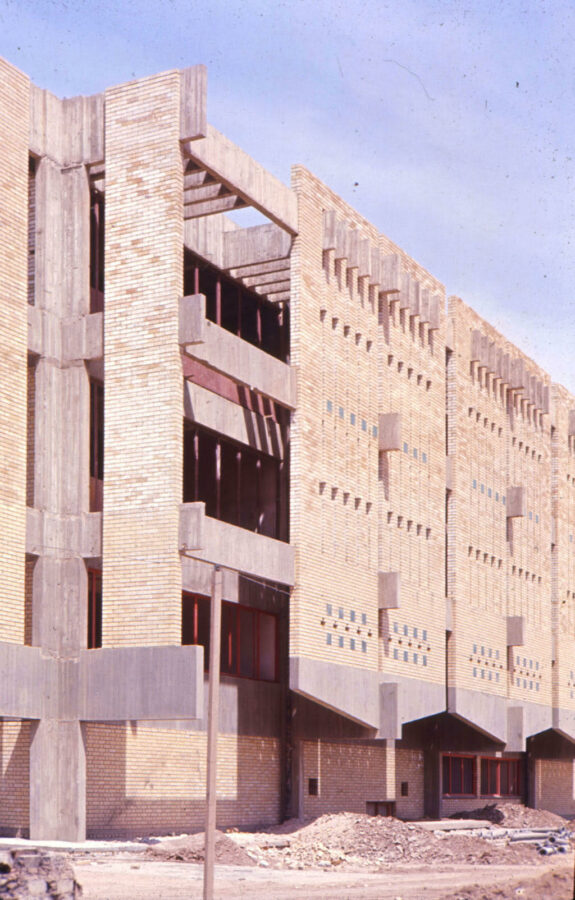 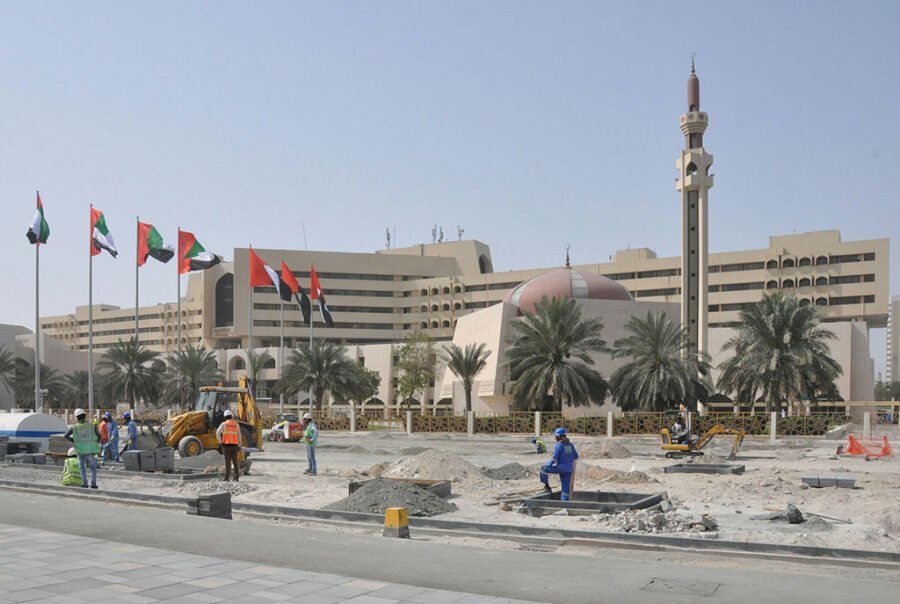