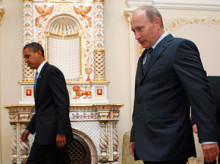 This piece originally appeared in The Washington Post (February 14, 2013).

The domestic problems facing President Obama have obscured an equally grave crisis: the unfolding Cold War-like relationship between Washington and Moscow. The recent spate of punitive legislation and abrogated agreements on both sides reflects a larger, and growing, antagonism. A new Cold War would further diminish, if not end, Russia’s cooperation in vital areas of U.S. national security — including not just North Korea, China, Afghanistan and the Middle East but also the prevention of international terrorism and nuclear proliferation. It would also almost certainly trigger a renewed nuclear arms race — instead of the deeper cuts that Obama wants — with the attendant dangers and budgetary burdens.

Why is another Cold War possible two decades after the Soviet Union ended? The U.S. policy establishment dates the causes to Russian President Vladimir Putin’s consolidation of power 10 years ago, blaming his policies. A more historical analysis, however, would date the primary factors from the 1990s and locate them in Washington.

Moscow has bitterly resented four components of U.S. policy since they were initiated by the Clinton administration: NATO’s expansion (now including European missile-defense installations) to Russia’s borders; “selective cooperation,” which has meant obtaining concessions from the Kremlin without meaningful White House reciprocity; “democracy promotion” in Russia’s domestic politics, which is viewed by Russian leaders as interference; and the general sense, repeatedly voiced in high-level Moscow circles, that “the Americans do not care about our national security.”Well-informed observers can reasonably disagree about Putin’s leadership at home and abroad, but fair-minded students of U.S.-Russian relations cannot lightly dismiss Moscow’s four abiding grievances. Unless these components of U.S. policy change — they were not revised even during Obama’s “reset” of relations — another Cold War is exceedingly likely.Obama has a historic opportunity. By transforming policy toward Russia in four fundamental ways, he could avert that possibility while greatly enhancing U.S. national security and his own legacy:●Since the 1990s, the creation of a NATO sphere of military and political influence ever closer to Russia has caused the largest and most dangerous conflict. Assuring Moscow that NATO will no longer seek to extend membership to the former Soviet republics of Georgia and Ukraine, which the Kremlin has declared “red lines,” would simply recognize realities: Neither country meets NATO’s criteria. Georgia does not control two of its territories, South Ossetia and Abkhazia, which have declared independence; Ukraine lacks sufficiently democratic governance and the popular support for NATO membership.

●Putin has never forgotten that his vital assistance to the U.S. war in Afghanistan in 2001 was later rewarded by President George W. Bush’s further expansion of NATO and withdrawal from the Anti-Ballistic Missile Treaty. Discarding “selective cooperation” for real negotiations should begin with the missile-defense installations that Washington and Brussels are deploying near Russia. Formally, they are a precaution against a future Iranian threat, but Moscow fears that the installations will eventually jeopardize its nuclear security. The program is enormously expensive, plagued by technical problems and needlessly provocative. Moscow has demanded at least minimal participation in the European system or, failing that, a written guarantee that it will never be directed against Russia. The Obama administration has repeatedly refused on both counts. Moscow says it will respond with new nuclear weapons. Meeting the Kremlin partway would defuse today’s most militarized issue and avoid a nuclear arms buildup on both sides.

●Ending direct U.S. “democracy promotion” in Russia, as with the National Endowment for Democracy, may be the hardest policy to change. But having been involved with Russian democrats since the Soviet dissident movement of the 1970s, I cannot think of a single U.S. intervention that significantly abetted Russia’s democratization, only ones that made no real difference or hindered it. Americans, official and private, can criticize the Kremlin’s practices. But U.S. government funding of nongovernmental organizations involved in Russia’s political life, a practice long resented by Russia’s political class and recently banned by Putin, is counterproductive. Nor would Americans tolerate a reverse form of interference.

●These changes would go a long way toward placating Moscow’s fourth complaint, that Washington does not take into account Russia’s legitimate security concerns, particularly near its borders.

There are good reasons to think Putin would respond positively to such U.S. initiatives: the essentially reactive nature of his foreign policy; his assistance to U.S. troops in Afghanistan since 2001; his support, in 2010, for tougher sanctions against Iran; his often-stated preference for “mutually beneficial cooperation” with Washington; and his own towering economic problems. The result could well be the post-Cold War partnership expected more than 20 years ago that got lost along the way.

But for this to happen, Obama would have to adopt the kind of revisionist thinking and bold leadership undertaken by Presidents Ronald Reagan and George H.W. Bush, who achieved, with the Soviet leader Mikhail Gorbachev, such historic changes that all three believed they had ended the Cold War forever.