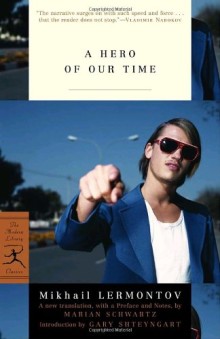 If Russian literature is a history of Pushkin imitators, then Lermontov came first, and he’s still the best. Many have tried imitate Pushkin’s style, but few went as far to write tragic poems about his hero’s death in a duel, and proceed to, years later, perish in a duel himself. People just aren’t committed to their writing like that anymore.

Mikhail Lermontov’s great novel A Hero of Our Time is required reading for anyone at the tail end of college or just out in the world, and resonates today. The hero is Pechorin, a confident yet sensitive soldier wandering around the Caucasus, explaining to anyone who will listen how bored he is with life. Does this sound like anyone you know?

Upon meeting an older fighter, Maksim Maksimich, Pechorin breaks out into an obviously rehearsed mourning for his own, young life. Nothing brings him pleasure! First he tried the pleasures which money can buy, but they became repulsive to him. Then he tried to read, but there even he was left without a sense of adventure. So he went to the Caucasus mountains, having adventures all over! He was, for the first time in his life, happy. But soon he become bored again. More bored than before! He avoids women to avoid melodrama. Excitement, sadness, nothing gets to this guy, Pechorin. So he’s just going to go on, adventuring and travelling and hopefully he’ll die on the road to somewhere exotic.

Maksim Maksimich is almost disgusted. It’s the first time he’s heard someone talk about that kind of boredom at the age of twenty-five! In fact, he’s worried that everyone who lives in a big city is like that. He hopes that most 25-year-olds are a little more upbeat.

Later on, reflecting on the dangers of his adventures, Pechorin remarks, “If I die, I’ll die. The world is better off without me, and I myself am significantly bored.”

In the tongue-in-cheek introduction to A Hero of Our Time, Lermontov claims to want to illustrate not just one man, but the development and vices of a generation. His generation was one of early disaffected youths who could not longer be roused by the great passions of a premodern time. The French Revolution had gone and passed, and romanticism was coming in. Great Ideas weren’t enough anymore to stir up a rebellion in the same way. They had led first bloodshed, then Napoleon, and back to a monarchy.

Pechorin is turned off by discourse and adores nature and travel. He wants to be out in the world and his passions are rarely flared up. Even with women. He chases after a Circassian princess mainly because he’s not supposed to and doesn’t wish to bed or marry her: he intellectualizes his life to the point where he intentionally walks into dangerous situations (like when he joins a duel which he knows is rigged against him) to see if it arouses feeling.

It may be true for all people in their twenties, but there is something familiar about this boredom, indifference and and desperate grabbing for agency in one’s life. Generation Ys are at least as much as past generations accused of a melancholic complacency, probably more, and some, like Pechorin, look for adventure in bad behavior just for the heck of it.

What makes A Hero of Our Time so relatable is the deep psychology. Although Pushkin’s prose is great to read (Lev Tolstoy said that Pushkin’s stories were clean, had nothing extra, but were somehow “naked”), Lermontov brings in a psychology. Pushkin saw the short story as a problem to be solved, but Lermontov saw it as a problem to be explored. Pushkin’s Belkin stories come off as sillier and more fairy tale than Lermontov’s prose. The self-analysis in A Hero of  Our Time not only touches us as relatable so many years later, but was also profoundly influential in the trajectory of Russian, and then world literature, to psychological and inner worlds in novels.

That, and cultural clashing in the Caucasus mountains is still a problem in contemporary times. This week, white power protesters rampaged around Moscow looking for the murderer of Yegor Sherbakov. The murder was blamed on a migrant from the Caucasus (where A Hero of Our Time takes place) and the protesters decided to smash windows and overrun a vegetable warehouse.

As an old author has survived the gamut of revolutions and centuries, and as he approaches a birthday with a round number, we sometimes like to think, “What would Lermontov see today?” Reading A Hero of Our Time now, the reader feels someone with a contemporary outlook. This novel is still for younger readers, and unlike Gogol’s work, which gets better as you get older and see more of the world, Lermontov’s can begin to seem too Romantic and at times tedious.

But he was young when he wrote. For such a young writer it is quite amazing, and we try not to think, what if Lermontov had lived another twenty years? (But, then, what if Pushkin had lived another 20 years?) We doubt Lermontov got out while he was ahead. His anxieties which he claimed described his young generation seem to describe the current young generation as well. This week he turns 199. That’s a long time not to fall out of style, especially for a hipster.

To Be Continued on Monday