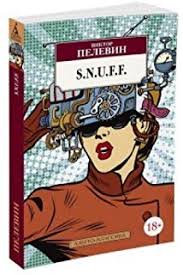 Macho posturing aside, the Russian Orc still faces one more challenge: he may not even be Russian. The reasons, however make sense only in Russian.

Back in 2002, the reliably hilarious Goblin studios released their own version of Peter Jackson’s 2001 The Lord of the Rings: The Fellowship of the Ring, replacing “братство,” the Russian term used here for “Fellowship” with “братва,”  a slang term for a band of criminals.  Offering up an irreverent “translation” from the English that functioned as a cross between What’s Up, Tiger Lily? and Mystery Science Theater 3000, Goblin had the fellowship fighting not orcs (“орки”), but “urks” (“урки”), a slang term for professional criminal that happens to be only one vowel away from Tolkien’s prominent villains.

Almost a decade later, Viktor Pelevin picked up on this phonetic resemblance in his novel S.N.U.F.F. (2011).  Pelevin, who generally overestimates the cleverness of his precious bilingual wordplay, made the orki/urki parallel the foundation of the novel’s media-besotted dystopian future. After a series of wars and disasters, the “civilized” population of humanity has moved to floating cityglobes called “ofshary” (see, it sounds like “offshore,” and it’s literally floating above ground! Who comes up with this stuff?). The novel’s protagonist, Damian-Landolo Damilola Karpov, lives in “Big Byz” (“big business” crossed with “Byzantium,” which is funny because…oh, never mind), and pilots a camera/weapon drone that films “snuffs” (ultraviolent propagandistic newsreels) while cavorting with his sentient, synthetic sex doll, Kaya.

The snuffs are primarily about the Orcs (spelled “Orks” in Andrew Bromfield’s 2014 translation), the population that lives on the ground.  Damilola somehow anticipates his readers’s surprise, and quickly offers an explanation about their name:

“Why are they called that? It’s not at all that we despise them and regard them as racially inferior – we don’t have any prejudices like that in our society. They’re people, the same as we are. At least physically. The fact that the word is formally identical to the ancient word ‘ork’ (or ‘orc’) is purely coincidental (although, let me remark in an undertone, there’s really no such thing as a coincidence).

It’s all a matter of their official language, which is called Upper Mid-Siberian.”

Upper Mid-Siberian turns out to be an invented language, based on “Ukrainian, larded with yiddishisms.”  When its creators turned their attention to phonetics, ” they threw in an aberrant vowel reduction from ‘o’ to ‘u’ – apparently they couldn’t think of anything better.”  To make matters more complicated:

“Upper Mid-Siberian has made virtually no inroads into colloquial speech. The only exception is the name of their country. They call it the Urkainian Urkaganate, or Urkaine, and they call themselves Urks (apparently this was a hasty revamping of the word ‘ukry’ – a High Russian name for an ancient Slavic tribe – although there are other philological hypotheses). In everyday speech the word ‘Urk’ is unpopular – it belongs to high-flown, pompous style and is regarded as fusty, bureaucratic and old-fashioned. But it was the origin of the Church English ‘Orkland’ and ‘Orks’.”

Pelevin’s narrator marshals a great deal of fake linguistics to justify this conceit, which seems to be in the service of multiple authorial agendas, the most apparent of which is the linkage of “orc” to “Ukraine.”   But Ukraine itself does not seem to be the primary target of Pelevin’s satire; if anything the only real “anti-Ukrainian” element of this use of this toponym as a convenient link to Tolkienist vocabulary is the conflation of Ukraine with Russia.  For the split between Big Byz and the Orcs dramatizes a different set of international and intranational conflicts.

On the international level, S.N.U.F.F. is a straightforward satire of the relationship between imperialist, Westernized powers and the second- and third-world objects of their manipulation, condescension, and aggression.  The snuffs serve to entertain a rich and jaded populace while simultaneously demonizing the Orcs as the primitive enemy of Biz Byz “democracy.”  In December 2011, Mikhail Boiko  asserted that the filming and bombing by drones are “obviously” animated by the civil war in Libya. The sad truth is, of course, that Pelevin’s drone satire always seems current—it’s just the names of the battle zones that change.

In addition, the Big Byz/Orcs split facilitates a bit of Liberpunk-Lite on Pelevin’s part:  thanks to the triumph of political correctness, feminists in Big Byz have raised the age of consent to 45, the rights of “faggots” must never be denied, and adult heterosexual males have developed their own “perverted” sexual subculture, based on their love of synthetic, surrogate women.

The “Orc question” becomes much more provocative when seen in terms of internal cultural dynamics.  For one thing, there is no actual ethnic distinction between the population of Big Byz and the people who live below.  And the condescension towards Orcs turns out to replicate the age-old Russian split between the elites and “the people,” with the Orcs at times appearing to be just another variation on the snobbish Russian epithet “bydlo” (discussed in Chapter 1). The rank-and-file Orcs are scorned by their own elites, who call themselves “Global Orcs.”

To the contemporary Russian reader, the object of satire is obvious:  the short-lived, on-line movement of cosmopolitan Russian-speakers throughout the world who called themselves “Global Russians” (a project associated, appropriately enough, with a journal named “Snob”).  Global Orcs flock to anything foreign, and do their best to distance themselves from the yokels who share their ethnicity.

In S.N.U.F.F, as in Elizarov’s “Orc Song” and Kalashnikov’s and Krupnov’s Rage of the Orc, Russia is the Orcish motherland.  But Pelevin complicates their jingoistic vision of Orc Pride, placing it squarely back within its native context: the inferiority complex that insists on turning the substance of Russian critique into a point of pride.

Next: The Tank Drivers of Mordor