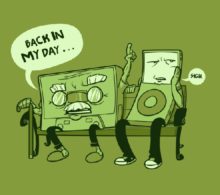 Philip Gleissner is a doctoral candidate in the Slavic Department at Princeton University.  This post first appeared on philipgleissner.com.

If you say the word SEELANGS to a Slavist, they will most likely respond by rolling their eyes. SEELANGS is a listserv used by our academic discipline to circulate all kinds of useful information and ask questions ranging from inquiries about Russian grammar to the accessibility of the Moscow Metro for wheelchair users. But SEELANGS is also the medium that brings nitpicky quarrels, negativity, racism, sexism and nationalism right into the inboxes of the list’s over 3,600 subscribers.

As scholars of languages and literatures, we are very good at thinking about the media we use to disseminate our work. But we have been negligent for far too long, when it comes to the ways we circulate our institutional knowledge. At the same time, these mechanisms of exchanging professional information are directly linked to the organization of power and influence in our field. It is about time to think about alternatives, some of which might be right in front of us (spoiler alert: ASEEES Commons).

SEELANGS, short for “Slavic and East European Languages,” is a listserv broadly used in our discipline. I remember signing up for it as an empowering moment. I was not yet in graduate school and all of a sudden had access to the kind of information that academic careers seemed to be made of: announcements for graduate programs and tenure track jobs, CFPs, advertisements for new books, conferences and all sorts of events. SEELANGS became a way to connect to a new community. When I organized conferences or panels, it was the first place I went to in order to look for collaborators and participants – often with great success. Others use the list to ask questions about resources or solicit advice about teaching. A translator of Russian literature frequently shares his translation conundrums with the list’s subscribers, and – as I have been told – he pays due credit and acknowledges this community in his books.

But SEELANGS has a very problematic side to it. As it is not actively moderated, everyone can respond to everything at any time. Hitting “send” on a snarky comment, nationalist, sexist and racist statements seems surprisingly easy for some of our colleagues. Listserv technology seems to bring out the worst in some and is surprisingly accommodating toward chauvinism, disrespect and aggressive kinds of behavior. These kinds of statements make it right into the inbox of a couple thousand of people.

In other words, SEELANGS is not the inclusive and helpful community it was supposed to be. At the last convention of the Association of Slavic, East European and Eurasian studies, we were reminded of this, when one of our colleagues was harassed on a panel by a member of the listserv, known across the field for his racism and inappropriate communication. He had a history of targeting her ever since a debate on the listserv, when she spoke up against the blatant racism of one of the list’s subscribers. I recently went back into the listserv archive to look at the debate (listserv software doesn’t exactly make this easy). In hindsight, the debate was more horrendous than most of us may remember. Not only was it an absurd quarrel about the right to continue referring to Ukraine as “the” Ukraine, a denomination that has been long discarded by serious media, academics and Ukrainians themselves, because it implies colonial subjection to Russia. The discussion featured openly racist remarks about African Americans and included an open attack of a minority colleague that caused surprisingly limited outrage and only a jovial comment from the list’s moderator.

I don’t know what the legal status of listserv messages is, but I compiled a Google document from this two-week long discussion. The meandering exchange fills 150 pages that present our discipline at its worst. Why did we allow for this to happen? And, if we can’t change this listserv, why don’t we let go of it altogether? I think there are two reasons: the anxiety to miss out on information and our cynical attitudes – the eye rolling and inbox rules that basically allow us to pretend we are detached, while being deeply implicated as long as we choose to subscribe and post.

It seems like listserv technology, a relic from 1990s internet culture, does not quite work for large groups – at least if there are no active moderators and stricter rules. Listserv discussions are confusing and create the illusion of a semi-private correspondence that deserves some kind of protection. Conversations become cumbersome to follow, as replies containing all of the earlier exchange grow longer and longer, while the archive is impossible to maneuver. In other words: a perfect playground for racist and sexist ideas. SEELANGS has 3,633 subscribers – there’s nothing private about these messages, but plenty of room to hide in the messy structure of the medium.

I fear that some individuals who have been posting hateful things will never change their thinking, but the incident at the ASEEES convention made it clear that our continuous use of SEELANGS enables them. We have been jovially rolling our eyes for far too long. So the question is – where do we go next? We cannot fully monitor the behavior of trolls online, for whom SEELANGS is only one stage of many. But neither can we stand by as they single and harass minorities.

It is not only our duty to refuse these individuals access to our channels of communication and thereby to conferences, publications and other events. If you discriminate against and harass colleagues based on ethnicity, race, gender or sexual orientation, you do not deserve the right to access our institutional knowledge and to receive the support of our community. However, just the other day, said individual who had harassed our colleague at ASEEES received a number of excellent answers to a question about linguistics on SEELANGS.

We are clearly incapable of changing SEELANGS, so it might be time to move on, since we do need a medium to circulate information in a reliable fashion. It is viable for our discipline to maintain its connections beyond the tight networks of a select few institutions within certain regions of North America.

The reason I am remaining on the list for now is in order to repost announcements from SEELANGS in other places. But I will not contribute actively to the list any more and am looking forward to one day relieving my inbox from it altogether.

Over the last two weeks, I looked at alternatives and ways in which they might address some of the concerns with SEELANGS: the illusion that utterances enjoy the privilege of private correspondence; the messiness of discussions and an unreadable archive; the shield of anonymity and lack of moderation; giving opportunities for known racists and harassers to continuously enjoy the advantages of our collective knowledge while also attacking our colleagues. Needless to say, there is no ultimate way to “fix” everything at once. But after discussing this for a while with colleagues and friends, here are some suggestions for small steps toward improvement:

Facebook. Slavist groups on Facebook have been around for about six years, such as “Slavists Unite,” “Digital Humanities for the Slavic Field,” and “Soyuz: Postsocialist Cultural Studies.” Membership needs to be requested, but is, to my knowledge, always granted. Many colleagues post their announcements and general questions to these groups, which are clustered around research topics. However, there are many people who do not use Facebook for professional purposes or at all. Others may not see those groups’ posts in their stream due to how Facebook’s algorithms target them. There is a risk that by relying solely on Facebook we give an advantage to those that are already part of strong institutional networks, who benefit from re-posts by influential colleagues etc., while others will miss out on information. This could potentially reinforce existing social imbalances in our discipline.

Twitter. I asked around among colleagues in other disciplines and some fields increasingly use Twitter. If you’re active on Twitter, following distinct hashtags is fairly easy and you might miss less information. I am not sure what hashtags to use or subscribe to. I posted a few things using #aseees, but Twitter seems fairly quiet in our neighborhood. For those using twitter: what’s your experience? What are the potentials of Twitter to disseminate our information?

ASEEES Commons. Part of the larger project of HCommons, this is the sharing and collaboration network for people in SEEES fields, developed by ASEEES in collaboration with the MLA and other scholarly societies in the Humanities. There’s a detailed documentation, including a post about First Steps. You need to create a free account and a profile, which limits opportunities for anonymity and disguises. Then choose which of the numerous groups to join  (“Graduate Students,” “Russian/Eurasian Literatures,” “Teaching Russian History”) or start your own group. Posts on discussion boards could fulfill the function of regular SEELANGS posts (and responses) and you can sign up to receive updates without cluttering your mailbox (Daily Digest, Weekly Summary). Discussions are easy to follow, open and archived. They do not create the illusion of confidentiality and don’t give authors the chance to stay anonymous, because (public) contributions to the scholarly conversation in groups are linked to your professional profile on the Commons.

Groups can be open, closed or completely private. Groups can have their own moderators or moderating teams. There are clear terms of services and community guidelines. There is reliable technical support. When something was broken, I tweeted at them, received a response in 10 minutes and it was fixed within 30.

ASEEES Commons has a lot more features, but that might be for next steps. You can create a personal website, work collaboratively on documents, post and access syllabi, share your publications and get a DOI. Not only is ASEEES Commons free; unlike services such as academia.edu, it will not generate revenue when you deposit the products of your intellectual labor. However, barely anyone uses it so far – unlike the larger Humanities Commons network, of which it is a part and which has gained over 11,500 members in a year. I posted a few times and it seemed very simple.

Where can we go from here?

You might have guessed that I would advocate moving our exchanges from SEELANGS to ASEEES Commons, potentially supplementing with Facebook and Twitter (#aseees ?). I believe it is worth investing time and energy into this, if there is a chance that it will make our field more inclusive, respectful and accessible.

Maybe it’s a good experiment for the holiday season: to stop posting and responding to SEELANGS, invest 20 minutes into creating an ASEEES Commons profile (also really good for your Google ranking!!), start posting. Then we can evaluate: is it easy enough to use? Does it solve the issues of SEELANGS? Do we still feel fully informed? If the answer to these questions is “no” (which I doubt), we can always regroup. SEELANGS won’t disappear in the meantime.

I suggest talking about the experience of this experiment on Facebook and Twitter. How about #quitseelangs (with two “e”)?