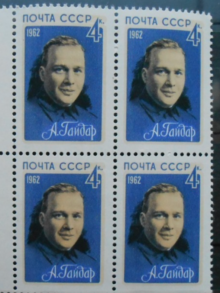 Victoria Buyanovskaya received her bachelor’s and master’s degrees in Russian Literature from the Higher School of Economics (Moscow, Russia) and is continuing her graduate studies at the University of Wisconsin-Madison. Her research interests lie primarily in the field of Soviet children’s literature, late Soviet culture, and late Russian modernism.

From the inception of the Soviet state, the launch of children’s literature was an important cultural project because Bolshevik leaders immediately recognized its potential to shape values and behavior. Indeed, the Soviet project was pedagogical in its very nature, with those subjects lucky enough to be children at its outset existing in a state of prelapsarian privilege, having been left “unspoiled” by an old regime that had inexorably warped even the most dedicated adult communists. As I will show here, this pedagogical model was inverted by Arkady Gaidar (1904-1941), making him the first Soviet children’s writer in the full sense of the word.

The revolutionary ideology of the early Soviet period was a priori future-oriented: the new world was being built for children. Yet as stabilizing and conservative tendencies won out within the Party, this illusion became harder to maintain, except perhaps within disciplinary discourse. There, the imaginary Soviet child played the role of the Other that must be “colonized” in order to become part of the collective body. This pedagogical “colonialism” served as a metaphor and example to adults, who — pragmatically speaking — were better off seeing themselves as uneducated children striving towards ideological enlightenment than fully formed thinkers bound to rigid principles and outdated perceptions.

It was against this background that Gaidar took up the challenge of making children lead and adults follow. By that moment — the early 1930s — he was already an author of several adult war stories and the traditional “coming-of-age” novel, School (Shkola, 1930), an instant classic. Yet Gaidar soon abandoned pedagogical idea that underpins this work, in which the protagonist is deprived of agency and formed by “good” adults and the Party, and developed a very different vision of Soviet childhood and Soviet history.

For Gaidar, no “post-revolutionary” Soviet world could exist, since he never quite abandoned the paradoxical notion that the revolution was an ongoing, unfinished process. By the 1930s, this view was not only outdated, but dangerously close to Trotsky’s “left deviationist” concept of “permanent revolution.” Nonetheless, against all odds, Gaidar succeeded in smuggling it into his writing.

The Soviet Civil War, which Gaidar had entered at the age of fourteen, never really ended for him, either — and not only because of the post-traumatic stress disorder from which he persistently suffered afterward. His narratives reflect these patterns of “incompletion,” recalling the “repetition compulsion” of trauma theory. His child protagonists never grow out of “playing war,” their dedication and youthful maximalism ensuring that the struggle for communism never ends in compromise.

The younger Gaidar’s characters are, the more they immerse themselves in their imaginary war environment, which becomes their natural habitat. At the same time, they are blessed with the gift of empathy towards those on their – Soviet – side of the fence. No less importantly, they see themselves not only as warriors and community-builders, but also as educators. Their pedagogical mission is to teach and direct the adults, who, two decades hence from revolution, appear to have lost their true connection to it.

It is thus 6-year-old Svetlana in the short story “Blue Cup” (1936) who leads her father on his suburban “sentimental journey,” in the course of which he must acknowledge himself as a part of the big Soviet family and thus re-discover his own home. In another famous short story, “Chuk and Gek” (1939), two naughty little boys compel their mother to leave Moscow for Russia’s Far North, where she must re-create “home” under inhumanly frozen conditions. The boys are children, true, but they are also restless adventurers connecting the periphery of the Soviet world to its center, greatly contributing to the project of imperial expansion.

Thanks to Gaidar’s painstaking imitations of childlike perception and play, his characters are fully believable as children. At the same time, however, they are what we might call “energy beings” who embody the revolution’s vigor and rhythm. It is deeply ironic that Gaidar garnered praise for the realism of his depictions of children’s lives. Yet his grounding of avant-garde poetics in unprecedentedly vivid depictions of childhood is so masterful that it effectively naturalizes the connection between the two.

Perhaps no text better illustrates the success of Gaidar’s revolutionary project than the short novel Timur and his Squad (1940). In this narrative, children’s energy is constantly channeled into deeds that are not merely good, but actively socially meaningful. Most of these feats are aimed at social stabilization: maintenance of order, re-education of bullies, social care for the families of soldiers.

The novel’s characters are still restless children capable of being provoked into disobedience by adults — a feature that made Timur a target for contemporary critics. Gaidar’s characters literally live in the game they have invented, but because the author gives the game’s results pride of place, energy and teleology are brought into direct correlation. Yet Gaidar remains true to his core principles, strategically recasting them into a utopian vision of a seemingly self-regulating society that is, in fact, invisibly regulated by children. Here, the spontaneity and playfulness of children become sources of natural and powerful self-organization, activism, and military self-training.

It is telling that Timur calls himself “the commissar” and opposes himself to the bully Kvakin, commonly referred to as “the ataman.” This is a unique situation in which the “free” energy of children aligns with state interests. Gaidar’s Soviet state emerges from revolution so that children, its true agents, can for the first time in history cooperate with the authorities rather than play “robbers” to their “cops.” In this way, Gaidar impresses adventure, and, through it, agency and imagination into state service, creating an ideally balanced mixture of avant-garde and canonically Soviet principles.

Gaidar’s youngest characters function not as promising, but as already accomplished leaders, models, and motors of history. His works renew and enhance the initial self-identification of the Soviet state as a would-be world “for” and “of” children. In creating vivid worlds that conveyed this ideal believably, Gaidar did much more than produce a lasting corpus of children’s entertainment. In effect, he created Soviet literature  as such.

Gaidar made Soviet childhood and, therefore, tales of Soviet childhood a magnetic domain of power and agency, inspiring a dedicated and populous readership. This was a community of young readers who felt moved and empowered to their own forms of activism, the Timurite movement (timurovtsy) being the best example. By strongly connecting this energy of adventure and freedom to Soviet ideology, Gaidar channelled it towards this ideology, making real-life children yearn to play the games that, in his books, change the course of history.

Thus, Gaidar’s revolutionary anti-pedagogy aimed at releasing the uncontrollable energy of childhood and yet turned out to be a surprisingly successful mediator between this energy and order, myth and social reality. This is how, through his renunciation of pedagogy and the delegation of power and agency to children, Gaidar “invented” Soviet childhood — a concept whose radicalism was the only viable “compromise” he could tolerate — both within and beyond the realm of fiction.