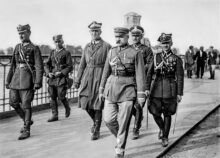 Krzysztof Brzechczyn is Full Professor in the Faculty of Philosophy at Adam Mickiewicz University in Poznań, Poland and an affiliate of the Institute of National Remembrance.

The views on Marxism of philosopher and legal theoretician Leszek Nowak were shared by a number of other important political thinkers of the Polish interwar period, including Roman Dmowski, Józef Piłsudski, Jan Kucharzewski, and Adam Ciołkosz. Most of these men had first-hand knowledge of Russia and were not — other than Ciołkosz — sympathetic to Marxism.

The Chief of State and First Marshal of Poland, Józef Piłsudski (1867–1935) primarily emphasized the foreign policy continuities between White and Red Russia:

Regardless of its government, Russia is vehemently imperialist. That is even the principal characteristic of its political nature. There has been the tsarist imperialism; today, we can see Red – Soviet – imperialism.

For Piłsudski, Bolshevism was an expression of what he perceived to be an elemental “Russian mentality.” As such, in his view, a Bolshevik system could not take roots in countries that were not ethnically Russian. In a 1919 interview with the Times, the future Marshal of Poland predicted that “in parts of old Russia where the socialist system is not typically Russian, for example, Poland, Estonia, Ukraine, the Cossacks’ areas in Siberia – it has never really taken hold.” In Piłsudski’s view, the Bolshevik system was a perversion of a democratic socialism based on social egalitarianism, since Bolshevism was based on the principle of “social revenge.” Social divisions and injustice do not disappear in communism, for Piłsudski, but are merely shuffled: previously privileged classes now become oppressed, as do opponents of the new social order.

Piłsudski’s political adversary Roman Dmowski (1964–1939), the leader and ideological originator of National Democracy, claimed, on the other hand, that the fall of tsardom proceeded from a confluence of unfortunate events: military defeats, intrigues in the tsar’s court and in government, and Aleksander Kerensky’s errors. In Dmowski’s view, the significance of Marxism was that “the word ‘Marx’ gained great suggestive power; with that word on the banner, one could force people to swallow many things they would otherwise not countenance.” At the same time, Dmowski coldly observed:

Still, even Marx could not have secured a victory and stable rule if [the Bolsheviks] had not used the ruling methods created earlier in the Duchy of Moscow, in the Mongolian school. It turned out they knew Russia very well and realized what could provide a durable foundation for their power. Only strong authorities which would ruthlessly destroy any obstacles could have such power. It should be noted that they were capable of ruling in that way and found enough people without scruples who could participate in the application of the system.

According to Dmowski, the durability of communism in Russia depended on two factors: the continuation of the tradition of autocracy and the collectivist approach prevalent in Russian society.

Jan Kucharzewski (1876–1952), lawyer, historian, and Polish Prime Minister in 1917 and 1918, confirmed that the version of Marxism popularized in Russia depended on its social and political conditions. He opined that the tsar’s despotism

imbued Marxism, from the beginning, with particular vehemence. It was chased to the ends of the doctrine and further on with the Cossacks’ cat which flogged the striking workers; a vengeful echo of the whiz of the cat would be heard in the revolutionary communism […]. Then, socialism did not find an open outlet for its energy in Russia. Under the influence of all those […] conditions, a vengeful, retaliating, vehemently anti-government and anti-class socialism was formed.

Adam Ciołkosz (1901–1978), a historian and the leader of the Polish Socialist Party in exile, believed that Leninism contradicted Marxism. At the end of the nineteenth century, German social-democratic theorist Eduard Bernstein had introduced an important correction to Marxism, claiming that, contrary to Marx’s predictions, the capitalist system could, in fact, be reformed. For Bernstein, the increase of productive forces necessary for the transition from capitalism to socialism would take more time and, therefore, could assume non-revolutionary forms. According to Ciołkosz, Bernstein was the first thinker in the history of the socialist movement who demonstrated that it was possible to transition from capitalism to socialism in a peaceful manner. The introduction of socialism by way of parliamentary reforms à la Bernstein, Ciołkosz argued, would be beneficial for both workers and the whole society. Lenin, per Ciołkosz, turned Marx’s theses upside down because his first priority was the achievement of political power; only after that point could new economic systems be built. If the basis of Lenin’s doctrine was a desire to construct a dictatorial form of state power directed by a “a new type of party” using nineteenth-century capitalists methods of industrialization, Russia’s new form of governance was more accurately called not socialism, but Leninism, communism, or Sovietism.

A retrospective survey of these opinions suggests that communist (or Soviet) studies were well underway in interwar Poland. These lines of inquiry were stimulated by recent Polish historical experience: to gain independence in 1918, the fledgling Polish State had to battle Soviet troops, which in 1920 almost reached Warsaw. Poland’s diplomatic relations with its Eastern neighbor helped spur interest for Soviet Studies in the Research Institute of Eastern Europe, then located in Vilnius.