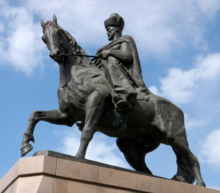 Curtis G. Murphy is an Assistant Professor in the School of Sciences and Humanities, History, Philosophy and Religious Studies at Nazarbayev University.

A few years ago, Daniel Scarborough, a colleague at Nazarbayev University, provided me with a clipping from the relatively obscure late tsarist-era Turkestani Spiritual News, written in 1914 and dedicated to the fifty-year anniversary of the capture of Shymkent by the tsarist army. The report noted that the garrison defending the fortress for the Khanate of Khoqand employed of a “golden company” of escaped prisoners, including a Pole who allegedly organized the artillery defenses. I immediately wondered about the identity of this escaped political prisoner and whether other Polish prisoners who found their way to Khoqand, Khiva, and Bukhara played a significant role in resisting Russian imperial expansion. The exploits of political prisoners in Siberia, after all, play a prominent role in the Polish cultural imagination, commemorated in paintings, Romantic literature, and memoirs, many of which continue to be reprinted and displayed in Warsaw bookstores. More importantly, I wondered if anti-imperial collaboration between Poles and Muslims could serve as the basis of more genuine cultural exchange and fraternization?

The real-life, and largely unsuccessful, irredentist activities of nineteenth-century Polish exiles like Adam Czartoryski and Michał Czajkowski cast a pall of disloyalty and conspiratorial inclination on the millions of Poles within the Russian Empire. As a recent work by Przemysław Adamczewski has shown, Polish exiles and Russian officials in the Caucasus contributed to this myth in equal measure. For Poles, stories of cooperation with notable anti-imperial fighters such as Shamil, a trope that appeared in both the confidential reports to Czartoryski’s Hotel Lambert and the pages of second-rate belles-lettres, offered hope and inspiration for the seemingly lost cause of restoring the country. Russian officials found the specter of disloyal Poles in military and civilian service a convenient scapegoat for military setbacks such as the disastrous campaign against Khiva in 1839.

Since the nineteenth century, the figure of the Polish revolutionary fighting “for our freedom and yours” has moved into popular culture. Ilyas Esenberlin, author of the Soviet-era historical trilogy Nomads, written in Kazakh, includes a Polish rebel, Iosif Gerburt, as a confidant of Kenesary, the most formidable anti-imperial Kazakh leader of the nineteenth century. In a sign that Polish cooperation with non-Russians retains currency in post-Soviet national republics, the 2016 Kazakh film Amanat about Kenesary included a Polish confidant of Kenesary named Józef Grzybowski while Poland and Georgia celebrated mutual cooperation at a ceremony in 2008 dedicated to their common resistance to the Russian Empire and the Soviet Union.

More difficult to answer is whether there is any truth to these tales. Cooperation, not to mention camaraderie, between a Catholic Polish noble and a Muslim, Kazakh khan would require overcoming numerous cultural, social, and psychological barriers and stereotypes. Most evidence suggests that encounters between Europeans and natives in the Caucasus highlands or the Kazakh steppe proceeded according to predictable patterns of hostility and indifference. Europeans escaping from Russian garrisons—hungry, dehydrated, unable to comprehend the local language, moreover carrying no items of value—usually found themselves returned to the Russians in exchange for rewards or sold into slavery. Every nineteenth-century traveler to Central Asia or the Caucasus—Witkiewicz, Desmaisons, Ignatiev, to name a few—recorded the presence of Polish and Russian household slaves in Circassian or Bukharan households.

I began to consider the possibility of Poles serving as advisers and supporters to Muslim rulers more seriously when I encountered American diplomat Eugene Schuyler’s 1876 Notes of a Journey in Russian Turkistan. In describing Samarkand, annexed to the Russian Empire in 1868, Schuyler mentions the story of an escaped Polish exile, Gerburt von Fulstein. According to this account, Gerburt escaped from Orsk into the Kazakh steppe and managed to pass himself off as the son of Sultan Sandjar, Kenesary’s brother, who had allegedly been raised as a hostage in Russia.

In a story worthy of Romantic literature, this fake Sandjar made his way to Khoqand, where the khan—married to Sandjar’s sister — accepted him on the declaration of his wife as the real Sandjar. Thereafter, the khan appointed “Sandjar” bek (governor) of Namangan in contemporary Uzbekistan, a post from which he was removed for leading a debauched, drunken life. Allegedly, the emir of Bukhara carried Gerburt-Sandjar back to Samarkand when he invaded Khoqand, where this Polish exile lived when the Russian army arrived. Reminiscent of the writings of Hungarian Turkologist Armin Vambery, Gerburt told his Russian hosts that he was himself not sure if he was a Pole or a Kazakh. Unfortunately, Schuyler recounted that Gerburt had died of cholera prior to his visit and thus the entire story rests on the hearsay of unidentified interlocutors.

Complicating matters, there are virtually no references to any Iosif Gerburt (Józef Herburt) in any Polish exile literature. The accounts of Polish exile, suffering, and escape from Siberia are multitudinous, and many Poles took it upon themselves to record the names of fellow exiles as a kind of national martyrology. Schuyler’s story of Gerburt would seem ideal for this purpose, and yet the only Polish language confirmation of his existence is a small entry in Wiktoria Śliwkowka’s meticulously researched biographical dictionary, Polish Exiles in the Russian Empire in the First Half of the Nineteenth Century, in which we read that Józef Fulstejn-Herburt (b. 1835) the owner of the village of Felsztyn (Skelivka in contemporary Ukraine), was arrested in 1852 for leaving Vilnius without proper documentation. For making “false testimony” about contacts with revolutionaries under interrogation, he was pressed into the Orenburg corpus without loss of noble status. No further information is included.

While working in the Central State Historical Archive of the Republic of Kazakhstan in Almaty in 2020, shortly before the onset of the pandemic, I fortuitously encountered a file, “Correspondence on the Search for a Run-away from the Sixth Line Battalion, the Polish Noble Iosif Gerburt, 1856-1858” among the papers of the Acting Administrator of the Syr-Dar’ia Kazakhs. Incidentally, the post of acting administrator, created after the Russian conquest of Ak-Masjid (Kyzylorda) in 1853, was held by another Polish noble from Ukraine, Józef Osmołowski, though the latter had come voluntarily via a career in Russian imperial service.

The dossier contains the correspondence of the military commander of the Syr-Dar’ia line with Osmołowski, relating that while Herburt had been stationed in the Troitsk fortress, he had already been suspected of excessive interest in the local Kazakhs. The commander noted that

in 1853 after a two-day absence, Herburt was found in the steppe among the Kazakhs and thereafter more than once sought the company of Asiatics. [He] secretly sought to learn Tatar [sic.] and in general was suspected of inappropriate relations with the Kazakhs.

Osmołowski who also spoke Kazakh, received instructions to search for Herburt among the Kazakhs in his jurisdiction, but Osmołowski responded in the negative. Herburt had not been found, and thus the correspondence concludes.

A second report from Orenburg Frontier Commission, dated 1858 and reproduced in the documentary collection On Rumors and Events in Central Asia, relates that a man claiming to be Mustafa Sandjarov living in the aul of Kenesary’s family, assisted a Kazakh working for Russian intelligence by confirming the spy’s false story of escape from a Russian prison. The collection’s editors, without citing additional sources, identifies this Sandjanov as Herburt.

Unfortunately, I have found no document that corroborates the “Khoqandi” episodes related by Schuyler. None of the Russian memoirs that I checked about the capture of Samarkand, many collected in the almost six-hundred-volume Turkestanskii Sbornik, mention a Gerburt or Pole present at the time, and Schuyler’s relation of Herburt’s story contains at least one suspicious fact. The emir of Bukhara invaded Khoqand in 1858, when Herburt should have still been in the steppe. Nonetheless, even if only the Kazakh episodes were corroborated, the fact that an escaped Polish exile from Ukraine managed to integrate himself into Kazakh society and impersonate a relative of Kenesary would make an exceptional find both for the myth of the Polish revolutionary and the more prosaic reality of cross-cultural interaction and exchange.