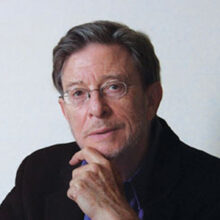 Steve was hired to NYU after his time at Princeton. He was a masterful lecturer who packed in 400 students each time he taught his survey of Soviet history, and he helped keep alive Soviet and Russian studies at a time when interest was falling. I admired that. For some of this time I was his chair in the Russian Department, and I worked with him regularly when we founded the Jordan Center and I became the director. I knew him socially.

He was a marvelous colleague, helpful to the Russian Department, to the Jordan Center, and to his colleagues. I can’t recall a time when he turned us down. I want this to be known and appreciated. Steve, could you speak at a panel on Russian politics? Of course, he always replied with his gravelly voice, without caveat. Steve, can we arrange a larger public event on Russian politics? Yes, and he brought with him ambassadors and senators and consultants, unprompted. Steve, would you mind retiring so that we can hire a full-time historian of the USSR? Sure, but just make sure they use it for that purpose, otherwise I’ll stay and keep the seat warm. I’ve got your back. I just need an office for my books. A few years later: Steve, about that office… No problem, when do you need me to vacate? Steve, we could use some funding for our MA students. How much? Steve, I have a donor who wants to meet you to seal the deal. Let’s have Greek, you order, and make sure you bring your father. Steve, do you have a light? He always did.

He had that manner: he sounded brusque unless you were from New York, which he wasn’t; he was proud to be “a boy from Kentucky.” I guess he may have sounded abrupt or even abrasive. As I got to know him I realized that he was sincere and well meaning. He had convictions and he argued them. Even in private conversation about third parties with whom he disagreed, he was not contemptuous. He disagreed. It was about ideas. In his famous exchanges with Richard Pipes, he managed to be polite to Richard Pipes.

He carried with him a permanent sense of beleaguerment, and it is true that there were long periods when he was beleaguered. In the 1970s and 1980s, he was an American leftist who thought he was facing a solid wall of conservative critics of the USSR. More recently, he was the rare public intellectual who did not discuss Russia in shrill, contemptuous, and categorical terms. This did not make him less outspoken in public; but he often sat a little to the side at a panel as if to emphasize that he was not part of the orthodoxy (though for a long time he was), hunched and inquiring shoulders asking if he was entitled to his opinions even as his voice carried on with his irrepressible confidence. In private he assumed the look of the enfant terrible, with a mischievous grin, assuming or insisting that his interlocutor agreed with him and was complicit, inviting you to join in a lonely but worthy cause. It made you want to go along for the ride.

He was a liberal to be sure, and he and his wife Katrina invested in basketball clubs in inner cities; Steve played basketball, too. It’s his politics for which he was most known, renowned, and notorious. I first read his books, mainly his biography of Bukharin, as an undergraduate in Montreal in the 1980s, and I understood them as a voice of the left. He consolidated a view of the Bolshevik Party and of the USSR as heterogeneous and socially based; he paved the way for a generation of historians though he himself was not a historian. Not all socialism was Stalinism, and even Soviet socialism was not always Stalinism. In hindsight I realize that Steve’s texts were radically liberal, an American understanding of the left, more about pluralism and egalitarianism than about class as such.

Then came the 1990s – around when I got to know him – and the social cataclysm of privatization, the declining international standing of the Russian Federation, and finally the international isolation of Russia after 2012 and the obsessive identification of one country with one person, Putin. Somehow conversations about Russia evolved around Putin and civil rights – fair enough – but hardly at all around the tens of millions rendered poor and insecure and who made Putin possible. I think we all dealt with it in different ways; by the mid-2010s many of us went quiet, and I avoided Facebook at all costs.

Not so Steve. Steve had flourished in a different era, and he was something of a national figure with his regular appearances on the CBS Evening News with Dan Rather, something of the national interpreter of things Soviet and then Russian. He had an excellent mind and he was a master of rhetoric. He could speak compellingly to an audience of colleagues and intelligibly to a TV audience at 6:30 p.m. Over time US media attention on Russia declined. And while many of us went quiet, Steve persisted and sought that national audience just about anywhere he could find it. By the 2010s, the problem was not simply that media attention had declined; any new attention was vapid and simplistic. It was hard to have a conversation about Russia without centering it on Putin; from 2016, Russia was only about election interference. Steve insisted that this was a large country, still geopolitically important, and we would ignore or misunderstand it at our peril. There had to be more to it than what we read in the Times or the New Yorker, which is a narrative of Putin vs the intelligentsia who knew certain journalists – not wrong, but shockingly narrow. Narcissism comes in many forms.

By 2014 or so he was very much a lone voice, in the academy and in the media, and the invitations were fewer. In Russia he was a star, because he was one of the few remaining American public intellectuals who did not make a career of trashing Russia or reducing Russia to one man and his critics; even Russian critics of the regime found in him a voice. He argued, and I think he was right, that we had adopted a new orthodoxy, to the effect that Russia/Putin was inexcusable (fine) but also not in need of serious explanation (not at all fine); and to even explain it in any other terms was retrograde. This was a pity, because whatever one might think of his opinions, he was intelligent. We needed a debate or, as he would have put it, there can’t be just one line. I was very pleased to offer him a forum at the Jordan Center. I wish more institutions had done the same: it’s better to have the argument than dismiss with a guffaw. Even as Steve’s opinions became more singular relative to the academy and the media, my successors Joshua Tucker and Anne Lounsbery insisted that he be given a place to speak – quite brave and correct, it seems to me, especially given that they disagreed.

By that time, in ways that are complicated, Steve had become more of the voice of Russia’s image internationally than of the left. Or it was a certain kind of American left. The common criticism of Steve was that he was identifying with Russia as it is now constituted, forced to defend what he might otherwise not have defended. There’s a bigger story here about the American left in relation to Russia, I think, and Steve was a part of it. Should Russia be measured by the standards of a progressive (in which case, опять двойка), or did it suffice that a country, any country, had the capacity to act as a check on the US globally (Steve believed that Russia had that capacity). It’s a conversation we did not have and I regret that.

If you knew him, he was a dear.