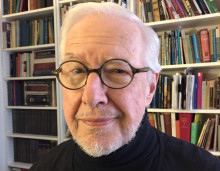 In the difficult, vacant days following Michael Holquist’s death, his thought serves as one source of consolation.  It returns in the form of what one of his favorite novelists, Fyodor Dostoevsky, has called “idea-feelings”: abstract and evocative, broad-reaching but vivid, exacting and moving at once, charged with the radiance, cordiality and unwavering youthfulness of his person.

The idea-feeling that comes to mind most insistently – because he returned to it often in our conversations – is “simultaneity.”  Perhaps the master-trope of his work, it points to the paradoxical nature of all experience, thought and action, in accordance with which nothing can appear, be thought or be done except in relation to something else.  Nothing can be a particular thing without belonging to a universal category, made up of other particular things; no event can be detected unless it is against the background of a pattern, which in turn consists of events; nothing meaningful can be uttered without the invocation of the entire language, which is itself nothing but a vast sea of utterances; our selves are given to us by others, who are, in turn, also selves.  These were all, to him, enabling dilemmas, the limits of thought and action that first make them possible and give them force.

This final nexus in particular, the basic entanglement between selves and others, seems to me to have been the essential one for Holquist.  His preferred interlocutor on the subject, Mikhail Bakhtin, spoke of the dialogic nature of all experience.  This aspect of simultaneity, the unavoidable – and, by both thinkers, joyfully affirmed – togetherness of existence may have been the pathos behind the concept, what made a technical term come alive and “matter.”

For both Holquist and Bakhtin, the festive, unprotected sociality of doings, words and things distends in time.  Simultaneity pushes us to rethink our notion of the present, to stop seeing it as a mere vanishing point between the present and the past, and to recognize in it instead the process whereby the alignments of what has taken place and what is yet to come keep shifting in response to our own actions and thoughts.  Thus conceived, the present is the space of what Bakhtin has called a “great dialogue” (bol’shoi dialog), a non-sequential and anarchic form of meaning-making contact, akin to a vast conversation, reaching back even into the depths of natural history and opening itself up to infinite responses in the future.

Holquist’s own work took the form of such dialogue, both in the present and across time.  The idea of scholarship as an essentially solitary pursuit seemed deeply alien to him.  His work was uncommonly often done in collaboration, always inviting of interlocutors, convivial even when taking the form of a polemic or a critique.  The dialogue kept expanding, so that it is now impossible even to approximate a complete list of his addressees.  They are strikingly many and diverse: from the Sophists, to Kafka, to the Russian novelists, to Freud and Kant, Claude Shannon, Lewis Carroll, the Baden Neo-Kantians, and, more recently, Ibn Khaldun.  In his pursuit of conversation, he was unstoppable.  In recent months, already unwell, he began to study computer programming in order to address responsibly the recent quantitative turn in the humanities.

Holquist’s approach was not one of an impartial historian of ideas.  A full-blooded philosopher, he passionately took sides: with Kant and Wilhelm von Humboldt against Hegel and Herder; with Dostoevsky against Shannon; lately, with Salomon Maimon against Kant.  His own voice in this conversation is now distinctly audible alongside others – in his books, his articles, edited volumes and translations, in the work of his colleagues and collaborators, the preoccupations and thinking styles of his students, in university course offerings and curricula, and in the interior monologues of his friends.

Simultaneity was, for Holquist, a way of understanding stories as well.  Here, once again, what’s needed is a feeling for togetherness.  A sequence of events can yield meaning only if on some level they are grasped in tandem, all at once, from a particular perspective.  Seen in this way, his life appears to me – who has come in contact with it relatively late and still views it with the eyes of an admiring student – as a kind of adventure novel.  Because there was often something generously mischievous about him, maybe even a picaresque.  A labor organizer, a military intelligence officer, a political activist, a wine merchant, a college expellee, a president of one of the world’s largest scholarly organizations, a factory worker, a world-famous scholar – the number and diversity of persons and lives he managed to contain in a simultaneity that somehow made sense is astonishing.

As I write this, trying to tone down – for the sake of the decorum he so valued – the half-articulate intensity of my gratitude for Michael Holquist as a person, a teacher and a thinker, I can sense him waving me off (“enough!”) and shifting away in his seat with a pained expression on his face.  His acute modesty was, for me, his most challenging personal characteristic, making it only just possible to thank him or to express affection.  I wish now I had come to one of our lunches, as students once did to his Directed Studies seminar at Yale, wearing a t-shirt with HOLQUIST emblazoned on it in bold letters.  An act of defiant appreciation, it seems faithful to the spirit of the person, his teaching and his thought, as if encapsulating the process whereby others – whether or not they are willing to acknowledge it or to take credit – come to be inscribed on our selves.