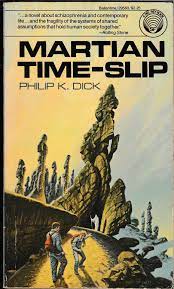 In the prologue to his classic utopian novel Red Mars (1992), Kim Stanley Robinson describes the adjustment human colonists have made to the clocks on their new world:

And then it was ringing midnight, and they were in the Martian time slip, the thirty-nine-and-a-half-minute gap between 12:00:00 and 12:00:01, when all the clocks went blank or stopped moving. This was how [the colonists] had decided to reconcile Mars’s slightly longer day with the twenty-four-hour clock, and the solution had proved oddly satisfactory. Every night to step for a while out of the flicking numbers, out of the remorseless sweep of the second hand . . .[1]

The Martian time slip was a way of stepping outside of ordinary time while also acknowledging its passing.  Within this gap,  it felt as if they had stepped out of time entirely, even though some mechanism was clearly keeping track of  those thirty-nine-and-a-half minutes in order to resume the ordinary chronology once the slip elapsed. The Martian time slip is a temporal state of exception, an exclusion that helps constitute the (counting) system from which it purports to be absent.

Human experience is filled with such times, moments that are counted and uncounted simultaneously, whether they be the sacred time of sabbaths and cyclical holidays, the timeless encounters with the numinous facilitated by meditation, prayer, or hallucinogens, or the fuzzy semi-consciousness of sleep. Then there are historical periods defined primarily by their absence of definition, their epistemological chaos, and general sense of falling outside of ordinary history. This is the interregnum.

Antonio Gramsci extrapolated from the dictionary definition of interregnum to define it as the period when the existing social order is no longer functional, but its replacement has yet to materialize. Zygmunt Bauman and Carlo Bordoni have extended the concept further, applying it to the economic, environmental, and governance crises that characterize the first decades of the twenty-first century. While both of these reinterpretations of interregnum has undeniable value, for the Russian Federation in the immediate aftermath of the Soviet collapse, it is nonetheless worth retaining at least some of the term’s literal meaning.  Not only does it work retrospectively for the period between 1991 and Putin’s revival of supreme central authority, it also corresponds with the earlier Russian historical era that has provided a metaphorical model for periods of chaos and confusion: the Time of Troubles.

The Time of Troubles began in 1598, when the tsar died without an heir, leading to a succession crisis complete with famine,  two imposters claiming to be the tsar’s dead son,  war with Poland, and foreign occupation by Poland-LiIthuania. It ended in 1612 with the election of Mikhail Romanov as tsar and the inauguration of the dynasty that shared his last name.   Memorialized most notably in Pushkin’s (and Mussorgsky’s) Boris Godunov, the Time of Troubles has remained current, both as an available phrase and a point of reference, and its application to the chaotic, impoverished, crime-ridden 1990s was inevitable.  Recently, as Russian scholars and media figures have begun to reexamine the Nineties, the appropriateness of this comparison has been (rightfully) called into question.[2]  As I have argued elsewhere, the framing of the Nineties as a decade of hell has been a cornerstone of the myth of Vladimir Putin as the country’s savior.

But there is a difference between calling the decade a Time of Troubles retrospectively and calling it by that name while the “Troubles” are still unfolding.  In addition to the everyday struggles arising from economic and social breakdown, the true horror of living in such an interregnum is the collapse of teleology.  When was all this going to end, and how?   Soviet ideology, while it remained current, justified any number of sacrifices in the name of the promised radiant future, either draining the present of all meaning or imbuing it with significance based entirely on what was supposed to come.  Perestroika promised improvement (reform), and eventually the replacement of an old system with a new one.  But the 1990s  offered only vague talk of democracy and markets, peppered with incomprehensible imported jargon that failed to obscure the extent to which the overwhelming majority of the population was getting railroaded. Instead of a grand narrative with a goal in sight, the 1990s offered endless iterations of meaningless misery.

When pressed to imagine the possible end to chaos, the media and culture industry repeatedly returned to two familiar historical models:  total civil war and the dictatorship of the “firm hand.”  Previously I wrote about the trilogy of novels by Sergei Norka that, after explaining just who was behind Russia’s problems (the usual suspects), imagined a way out thanks to a “Russian Inquisition” that would bring an authoritarian nicknamed the “Dark Horse” to power.  The best outcome was a replay of history,  whether Russian or more generally European.

The very metaphor of the Time of Troubles presupposes that chaos ends only through the reinstitution of strong central rule.   In that regard, the outcome is a foregone conclusion.  But the fact that the Yeltsin Era would officially end with the last moments of 1999 was by no means guaranteed.  While this is one of those rare instances when the calendar and the popular sense of the period prove to be in near-perfect alignment, the inauguration of what would eventually be seen as the Putin Era came as a complete surprise to the families gathered around their televisions for the traditional new year’s greetings from the country’s leader. Nor did Yeltsin’s statement, “I’m leaving. I’ve done all I could,” sound particular momentous (let alone the phrase as it is misremembered in the popular consciousness and Internet memes: “I’m tired. I’m leaving“).

Thus the Time of Troubles works for the 1990s both because of the retrospective ability to see it as a distinct historical era and the contemporary experience during the 1990s of an unstructured time with no end in site. As an interregnum, it is a discrete period with a beginning and end that nonetheless describe a time marked by a sense of total timelessness.  The 1990s were the Moscow time slip.

[1] Martian Time-Slip was the title of a 1964 novel by Philip K. Dick; Robinson (and his colonists) are engaging in an in-joke.

[2] See Gulnaz Sharafutdinova’s The Red Mirror: Putin’s Leadership and Russia’s Insecure Identity for a particularly convincing analysis of the Time of Troubles metaphor for the 1990s.