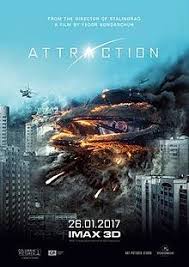 This is the ninth entry of Russia’s Alien Nations: The Secret Identities of Post-Socialism, an ongoing feature on All the Russias.  It can also be found at russiasaliennations.org. You can also find  all the previous entries here.

With the abolition of literary censorship and the rise of market-oriented publishing, fantasy and science fiction in Russia greatly expanded their foothold in the bookstores after 1991, and not only thanks to the influx of translated material.  Yet contemporary Russia never became a popular tourist destination among the interplanetary set.  Aliens did come to Post-Soviet Russia, but only occasionally.  Dmirty Bykov’s 2005 novel The Evacuator focuses on a man and a woman who seem to be engaging in a linguistic erotic fantasy, where the man claims to be an alien and teaches the woman how to speak his language (much of which sounds like baby-talk versions of actual Russian words).  When Moscow is threatened by a series of terrorist attacks, he reveals that this role-playing game is actually real, and volunteers to evacuate his beloved (along with a few other random people they meet along the way) to his more advanced homeworld.  When they arrive, the homeworld turns out to be just as chaotic and dangerous as Earth, so they turn around and go back to where they started.

Readers of Bykov’s Living Souls (ЖД) will not be surprised to find that the author’s attitude towards group identity is playful and skeptical; even in the beginning of the novel, the “alien” is so much like a human Muscovite that the differences are hardly worth nothing, while the ending suggests that it is easier to find the true Other back at home.  Completely uninterested in the conventions of science fiction, Bykov produces a fantasy about alien visitation whose contrivances are only barely plausible. For him, science fiction serves the same purpose as biblical myth in Vladimir Mayakovsky’s Mystery-Bouffe: it provides a set of familiar yet resonant tropes that help us think about catastrophe.

Post-Soviet cinema has been similarly reluctant to have its earthbound heroes share screen time with aliens from outer space.  As Irina Souch reminds us in her recently-published monograph Popular Tropes and Identity in Contemporary Russian Television and Film, just one week after the failed August coup attempt against Gorbachev set in motion the chain of events that would lead to the official dismantling of the USSR, Eldar Riaznov released a film that, on the cusp of the Soviet and post-Soviet era, serves as an elegy for a vanishing world: The Promised Heavens (Небеса обетованные). In this bittersweet and charming movie, a collection of elderly homeless men and women, many of whom had been brought low by the destruction of the Soviet system, have been living on a landfill, only to find out that their new “home” is about to be demolished to make room for a condom factory.  But the self-proclaimed “president” of the landfill has an answer: he has been contacted by aliens who are ready to take them all away to a better world.  By the end of the film, the aliens have not appeared, and our homeless heroes are surrounded by the police. But when the President and his comrades climb aboard an old steam train that was abandoned years before they were, the train ascends into the clouds, presumably taking the President’s group off to the alien promised land in the sky.

Of course, we never see the aliens.  indeed, that’s the point, as the film is about faith at a time when faith seems ludicrous.  If we take the plot literally, then, yes, The Promised Heavens is a film involving aliens.  But, to quote from a pivotal scene in Parker & Stone’s The Book of Mormon: it’s a metaphor.  Everything about this film is, to the point of resembling pure allegory.  Russia has abandoned its elderly? They live in a dump.  Russia can’t conceive of a future? The dump is being replaced by a condom factory. For the plot to work, the aliens could just as easily have been fairies, or simply angels. Yet “aliens” are undoubtedly a better choice.  We would already have some idea about what fairies are and what they could want (answer: nothing good), while angels would take the already literalized metaphors and crush them flat.  Aliens, on the other hand, are pure alterity: they could be anything, which is why they are such an appropriate screen onto which the heroes can project their hopes.

Two recent films about alien invasions are much more at home within their generic confines.  The first, The Darkest Hour (2011), was essentially an American film, with Russian investment and the involvement of Timur Bekmambetov as co-producer. Bekmambetov’s role would not necessarily require any Russian content, as he is one of the few contemporary Russian directors to have found commercial success as a filmmaker in Hollywood (anyone buying tickets to Abraham Lincoln, Vampire Hunter in expectation of Russian themes would be sadly disappointed, not to mention strangely underinformed). The Darkest Hour  puts Moscow at the center of the invasion from outer space, but most of the viewpoint characters are Western (from Sweden, the U.S., and Australia). Part of the plot even involves their attempt to get to the American Embassy for safety—it’s already been gutted, but the roof does provide a nice aerial view of Moscow under siege.   The Darkest Hour is less about Russia encountering the alien than about the conflict between two different species of aliens (Westerners and extraterrestrials) using Moscow as an exotic backdrop.

The other film, Attraction (2017) is a purely Russian production, directed by Fyodor Bondarchuk, transferring familiar blockbuster tropes to a Russian setting.  An early scene of an alien craft crashing into the Chertanovo district of Moscow provides that particular thrill of urban architectural destruction familiar from such films as Independence Day. Aside from the visuals, one of the attractions of Attraction is that, like the best first contact movies, it seems to be about more than simply what we are seeing.  The alien is benign, but the Muscovites who survived the consequences of his catastrophic landing are in no mood to greet him with the traditional bread and salt. Bondarchuk himself said the story was allegorical, with the extraterrestrial filling the general role of “Other,” while the screenwriters even went as far as saying they were inspired by the 2013 anti-migrant riots in the Moscow neighborhood  of Biryulyovo. The political parallels are not exactly delivered with the lightest of touches (“You’re from another galaxy? Well, we’re from Chertanovo!” shouts the mob as they go off in search of alien scum to pummel).  It also doesn’t hurt that the alien visitor happens to look like he would be equally at home in either his spaceship or on the cover of Tiger Beat. The main characters immediately find themselves in a love triangle that plays out like Romeo and Juliet, if Shakespeare had only though to include exoskeletons and death rays.*

For the most part, however, when aliens come to Russia, they arrive in the past or the future, rather than the present.  The multi-volume Ethnogenesis project (2009-2015), which features magical objects, super powers, international conspiracies, resurrected Nazis, and intergalactic empires, also included aliens, but their interaction with humans either takes place in prehistoric times (Dmitri Kolodan’s Pangeia 1: Land of the Giants (2011) in the far future (the Sleepwalker trilogy by Aleksandr Zurich (2009-2011), or as anecdotal recent history (one of the trilogies features real-life Kalmykian President Kirsan Ilyumzhinov, famous for his claims that he was abducted by aliens in 1997). Vladimir Sorokin’s Ice trilogy, which  is predicated on an interstellar substance that arrived in the 1908 Tunguska impact event,  could, if we squinted at it the right way,  be considered an alien invasion, but the novels are more concerned with the awakening of a small segment of humanity than any of the more familiar F&SF tropes.

Aliens serve as a historical explanation for a current problem or plot devices in the future, but not so often in the here and now.  As Mark Lipovetsky and Kirill Kobrin argue, recent Russian writing has turned away from the present day (and even the future) in favor of a retrograde obsession with the historical past.  If we turn to the particular genre(s) of fantasy and science fiction, then the Russian stories that deal with the present veer much more into the realm of fantasy (particularly urban fantasy) than to science fiction proper.  And it is both appropriate and ironic that the most notable use of the Russian equivalent of “UFO” (“NLO”, a literal translation of the English term) is as the abbreviation for the most prominent literary journal and publishing house in Russia since the collapse of the Soviet Union: Novoe literaturnoe obozrenie (New Literary Review).  The most significant alien vessel in contemporary Russia is crewed by Russian intellectuals and academics.  No one in Chertanovo is shooting death rays at them, but no one is falling hopelessly in love, either.

Next:  A Hero of Someone Else’s Time

*Also, the body count is lower.  Just as Rent spares Mimi where La Bohème sends her shuffling off this mortal coil, the (human) female lead survives, and it even looks like the alien Romeo isn’t entirely dead yet.  With a sequel in the works, we might finally find out what happens when two crazy kids from the Montague/Capulet clan try to make it work.