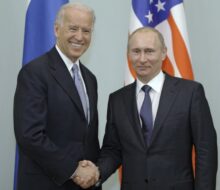 Ivan Kurilla is a Professor of History and International Relations at the European University at St. Petersburg, Russia. He is the author of several books and many articles about US-Russia relations and political (mis)uses of history.

It seems too early to predict what form Russian-American relations will take during the incoming Biden administration. We do not yet know who will head up the Departments of State and Defense, who will become national security advisor, and who will lead the Russian desk.

Still, we know enough already to surmise that we should not expect much change.

First and foremost, we know that nothing will change on the Russian side of the relationship. President Putin used 2020 to consolidate his autocratic regime, amending the constitution such that it now permits him to stay in power for life. Russia does not need to deepen its confrontation with the US, but it is hard to imagine the Kremlin changing its foreign policy. Thus, all the reasons for American sanctions will remain.

On the American side, three factors will likely influence US-Russia relations: the perception of international threats; the structure of political discourse; and domestic concerns.

It is unlikely that the established set of “threatening” foreign powers will change in the upcoming four years. Certainly, the security sphere is always fraught with potential surprises, but without “black swans” on the horizon, the long-term and inevitable process of Russia’s replacement by China as the main rival and major threat to the United States will probably proceed at a slower pace under Biden than under Trump.

This slow change will, in turn, influence the evolution of a political discourse perennially based on the binary perception of “us” versus “them.” In American debates, Russia is the traditional Other. Despite the radical changes the country’s government has undergone over time — from conservative monarchy before 1917, to radical socialist experiment in the 1920s, to leftist autocracy in the late Soviet period, all the way to a more traditionally “rightist,” personalist regime today — domestic debates in the US continually use “Russian” as a synonym for “un-American.” Russia will remain in this role until Americans reinvent China or some other nation as the USA’s main Other.

The overuse of the “Russian meddling” trope during Trump’s presidency has probably caused public fatigue, and without Donald Trump — the scandal’s real target — this discursive touchstone may be abandoned or at least deemphasized. At the same time, the main goal of the Biden presidency will be to bridge a split in American society. In this context, exaggerating a foreign threat could look like a justified tool in reminding Americans of a need for unity.

The most obvious change to be expected from Biden is to break Trump’s self-imposed taboo on criticizing Vladimir Putin and the Kremlin’s domestic policies. Democrats were traditionally more attentive to human rights violations in the USSR and Russia, and the new authoritarian turn will not pass unnoticed. It is very likely that Biden will lend moral support to segments of the Russian opposition, possibly even returning to the late-Cold War practice of applying pressure to the Russian government on behalf of the newest generation of dissidents. Biden is also likely to continue pressing European allies to decrease their economic cooperation with Russia.

Still, this author is reluctant to agree with those experts who hastened to judge Biden as an “anti-Russian” President based on his statements as Vice-President or during the campaign against Trump. Indeed, Presidents tend to change their minds in tune with changing political contexts. To give a few examples, President John Kennedy, who had presided over the most dangerous crisis of the Cold War in 1962, delivered a speech at American University in 1963 in which he called for peaceful cooperation with the Soviet Union. Anti-Communist Richard Nixon initiated a détente with General Secretary Leonid Brezhnev in early 1970s. Finally, the crusader Ronald Reagan — who had labeled the USSR an “evil empire” — eventually ended the Cold War.

Regardless, without the constant internal clash over Russian policies that prevailed in the US during the Trump administration, routine diplomatic contacts could become more efficient. There is always a “window of opportunity” at the start of a new administration, but it has rarely looked as narrow as it does now. It seems likely that, at least, the Strategic Arms Reduction Treaty (New START) will not be abandoned under the new American president. Perhaps, also, the whole field of the arms race and world security will return to the US-Russia agenda. Hopes for the reopening of the closed consulates in San Francisco and St. Petersburg and the return of diplomats are much less grounded: while the reduction of diplomatic staff four years ago indeed harmed relations, a reopening of the consulates would have symbolic meaning and could not be expected until meaningfully better times.