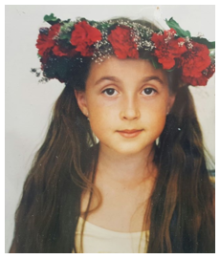 Alexandra Bulat is an ESRC-funded PhD student at the School of Slavonic and East European Studies (SSEES), University College London.

My mother first dreamt about leaving Romania during the communist regime, while aware that migration was not really an option for the ordinary citizen. In her early twenties, her romantic relationship suddenly ended when the partner chose to migrate to Israel. She was not even halfway through the medical degree and could not ‘risk’ following him. She told me how, while together, they even used to plan, at some point, ‘swimming the Danube’ to exit Romanian territory. These plans did not materialize. However, ever since those moments, my mother has been persuaded that she does not want to live in Romania for her entire life.

She met my father at university. He had moved to Iași from a smaller town. Once their relationship became more serious, they settled in my grandmother’s flat, got married, and soon after they finished studying, I was born in 1994.

A few years later, my mother had another, and this time, safer opportunity to leave Romania: my father was offered a temporary health service contract in a small north English town. This happened in 1997, so Romanians needed visas.

‘Both our monthly doctor salaries put together could not even pay the fee for one single UK visa!’

With financial help from friends and family, my father left first. Although he repeatedly told his wife that it was not the ‘right time’ to move to the UK as a family, she ‘surprised him’ a few months later – by showing up with several heavy suitcases and the three-year-old me. She had rented the flat in Iași and obtained a travel visa. Most importantly, she was convinced that we would remain in the UK permanently, because some of her university colleagues, all medical doctors, successfully settled in the UK during the nineties.

I started nursery school, learnt my first English words, and although I did not say a single word during the first weeks, after three months the staff told my parents how ‘I spoke just like an English three-year-old’. Meanwhile, my mother, unemployed and without full rights to work in the UK, was staying at home, improving her English, and applying to jobs. She had given up her general practitioner job in Romania long before she decided to go to the UK. She was not happy about the pay and the way young doctors were treated in Romania, so she started working in sales in the pharmaceutical industry, but left the position soon after.

Seven months later, my father decided to return to Romania. There were many reasons: he did not particularly enjoy the working culture in the hospital, his contract was ending (so he had to re-apply for a position, while having limited working rights), and he wanted to be closer to his parents. My mother thought returning was the ‘biggest mistake’ of their lives. A few days before we all left the country, she had finally had an interview for a good job. Perhaps the next tenants at the address in north England received an offer letter, but my mother was not there anymore to find out the result. It would have been different if she had an email account in 1998…

To mark my last day at the nursery, my mother bought a hedgehog-shaped cake and videotaped the last moments spent there.

‘I will be back in the autumn’, I confidently told the other three and four-year-olds, although my parents showed no sign we were going to return to the UK ever again.

I did keep my word! I was back in the autumn. But it was fourteen years later. Plus, I came to the south of England this time. On the 11th of September 2012, I crossed the UK border at Heathrow airport. Since then, I visited Romania three times only: I went twice in 2013 to my home town, and once for an academic conference in 2016.

‘What brings you to the UK?’, the passport control official asked me in 2012.

‘I am starting my undergraduate studies.’

Romanians could travel freely to the UK in 2012, due to Romania joining the EU in 2007. However, they did not have full rights to work, and some viewed Romanian migration with suspicion. Negative portrayals in the UK tabloid press often showed Romanians as beggars, criminals, benefit scroungers, or generally undesirable migrants. The worst was yet to come: negative discourses intensified when Romanians were given full rights to work in 2014, and, consequently, the number of Romanians in the UK has been increasing significantly. Negative stereotypes were further popularised during the referendum campaign exiting the EU and after the result to leave was announced.

Although I learnt English in a Romanian state school, the teaching was not always of best quality. Moreover, back in north-eastern Romania, I lived with my mother after my parents’ divorce in 2000, and she was away on business half of the time, if not more. I ended up spending most time with grandmothers, aunties, and childminders, and then, during my teenage years, school colleagues and short-term boyfriends. I skipped many classes, going to coffee shops instead, but I have always kept a passion for self-studying. Despite most my best friends not performing well in school, I have always been at the top of the class.

I mostly learnt on my own for the English exam required to apply to a UK university. I selected five universities through UCAS, was interviewed for Oxford and failed, and ended up with one offer only – Sussex University, BA Sociology and Media Studies. During my last year of college, I had no clue of what to do next, except of living in a ‘better’ country and writing a book at some point in life – so I randomly applied for courses which ‘sounded interesting’: Classics at Oxford, Law at another university, and so on. It happened that Sociology won the random game. No one in my school had preparatory classes for applying to university, or any kind of advice, so we were left with our own confusion and luck, in addition to information from the internet and more rarely, from connections.

With quite a high score in my IELTS exam, I was confident I will adapt to the UK life from day one. I was wrong. It took months before I could fully participate in a conversation with my British colleagues. To my surprise, the English taught in books barely helped, if one is not used to speaking exercises and listening to a variety of accents. The vocabulary I remembered from 1997 was, of course, not a suitable level for university.

I did rather well as an undergraduate. Used to have mostly ‘10s’ in college (10 is the highest mark one can get in Romania), I was shocked to see the 59% for my first university essay.

‘5,9 basically means you are stupid!’, I remember being angry during the tutor’s office hours. ‘It’s 59%, and it’s really good for your first essay, you’ll be fine!’

I was not persuaded in the slightest. I knew I had to try way harder.

In 2013, my mother ‘surprised me’ (the same she did to my dad!) and moved in with me. In the same year, I started a relationship with a British guy, and we have been together ever since. This helped a lot with my English. I remember all those times in the pub when he checked my essay structure first, and then we had some drinks!

My mother could not find a job at her level and was quite frustrated. Used to manager jobs in Romania, she did not start that high, but after changing a few of them, she eventually got there. As for me, after graduating with a first-class degree, I was accepted into several universities for Masters’ programmes, including Oxford and Cambridge. I collected my Cambridge degree in July 2016 and started straight away a fully funded PhD programme at University College London.

Since my second year of university, I have been researching EU migration. I first focused on Romanian migration to the UK, and now I research British attitudes towards EU migrants in the context of Brexit. Migrants do not always have a straight forward, purely economically-motivated story, as some researchers depict it. It is important to let those stories speak for themselves and show the variety of migration reasons.

‘After you finish your PhD you’ll go back to Romania, right?’

I usually don’t even bother to detail the long and various reasons for which I do not see myself returning to Romania. ‘My partner is British’ is usually sufficient to make people who ask this rather rhetorical question think twice about the assumption they made.

‘What if you can’t stay after Brexit?’, someone asked me the other day.

‘Well, if I don’t find a way around it, I guess I’ll move to Ireland next doors?’, I said, and we both laughed.