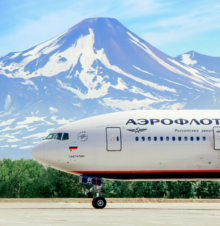 Steven E. Harris is Professor of Russian and European history at the University of Mary Washington and author of Communism on Tomorrow Street: Mass Housing and Everyday Life after Stalin (2013). His current book project, Flying Aeroflot: A History of the Soviet Union in the Jet Age, examines the Soviet airline and aviation culture in late socialism. This blog post draws from his two recent research articles: “The World’s Largest Airline: How Aeroflot Learned to Stop Worrying and Became a Corporation” (Laboratorium, 2021) and “Dawn of the Soviet Jet Age: Aeroflot Passengers and Aviation Culture under Khrushchev,” (Kritika, Summer 2020).

Yesterday’s post addressed the new cold war in the skies, which has divided the West from Russia as a consequence of Russia’s aggression in Ukraine. Sanctions against Russia’s aviation sector and the country’s retaliatory measures have unmade many of Russia’s global air routes, which the Soviet Union began building in the mid-1950s. Yet this sector, I hazard to predict, will likely weather sanctions by recreating the illiberal regime of air travel that characterized Aeroflot in the Soviet era.

In this blog post, I consider how long this new Cold War in the skies may last. Here again, the superpower conflict from the last century offers some clues. In turn, current conditions help us to rethink the role aviation sanctions played in Cold War history.

The exclusion of Russian airlines from much of the world’s airspace was arguably the most visible sign of sanctions that countries imposed on Russia in response to its war in Ukraine. Over thirty countries, mostly in the European Union and NATO, barred Russian airlines from their airspace and Russia soon retaliated in kind. In addition to such actions by states, non-state actors have imposed their own sanctions affecting air travel. Leasing companies have demanded the return of foreign aircraft used by Russian airlines, which are now cut off from the supply of spare parts needed to repair those planes. Aeroflot has lost access to two major booking systems, further suggesting technological regression and worsening customer service.

Non-state actors have also canceled or scaled back their ties to Russia that rely on air travel. Colleges and universities have suspended study abroad programs and research partnerships, sports associations have scrapped events in Russia, and travel companies have canceled tours. Even if aviation sanctions are dropped tomorrow, re-establishing these ties and the air traffic they bring to Russia will take much longer.

So how do today’s aviation sanctions against Russia compare with similar measures in the past and how long might they last?

Insofar as suspending established international routes is concerned, the current ban on Russia’s airlines is actually more comprehensive than anything Aeroflot experienced on routes it was already flying abroad in the Cold War. The incident that produced an outcome most similar to today’s sanctions was the Soviet Union’s downing of a Korean Air Lines 747 airplane in September 1983, which killed 269 passengers and crew. In response to that massacre, 17 countries suspended their air routes to the USSR, though most resumed them shortly thereafter in October 1983.

The United States, in contrast, was an outlier. It only reopened its skies to Aeroflot in 1986. Already before the Soviet air force shot down the Korean Air Lines plane, the US had eliminated Aeroflot’s regular routes and charter flights to the US as punishment for the Soviet invasion of Afghanistan and suppression of the Solidarity movement in Poland.

But the United States’ willingness to punish Aeroflot for Soviet violations of other countries’ sovereignty had not always been so strong. In July 1968, Aeroflot and Pan Am inaugurated the first air route between their two countries with flights connecting Moscow and New York. Just a month later, the USSR invaded Czechoslovakia but the two airlines continued to fly their new route.

Why was the Soviet Union’s brutal suppression of the Prague Spring—which anticipated Ukrainians’ desire today for real independence from Moscow—not enough for the US to halt the new air bridge to the USSR? Had the spirit of détente between the two superpowers already come to outweigh the sovereignty of a smaller country and its desire for independence?

Insofar as more recent history is concerned, we could also ask why comprehensive aviation sanctions were not imposed on Russia during Moscow’s brutal war in Chechnya, Russia’s invasion of Georgia, Russia’s first invasion of Ukraine and annexation of Crimea, and Russia’s participation in the Syrian civil war.

In short, what makes some invasions more deserving of sanctions than others? The answer to this question appears to depend largely on the circumstances of the situation at hand rather than any clearly defined, universal criteria. Though it seems unimaginable and even distasteful today in light of Russia’s ongoing war in Ukraine, direct flights between the United States and Russia will eventually resume. Cold War history suggests the circumstances that may allow this.

The Reagan administration reopened American skies to Aeroflot in 1986. What changed to make this possible? The USSR had a new leader, Mikhail Gorbachev, with a new vision for his country that did not hinge on paranoia about NATO or the West more generally. Yet the Soviet Union was still fighting a losing war in a country it had unjustly invaded. Such a war, it appears, does not have to end for air bridges to be renewed. The Cold War history of international air travel suggests that commercial airlines, tourist agencies, and other stakeholders may not wait for the end of the current war before putting pressure on the US, Western governments, and Russia to reopen the skies.

It should also be noted that, from the outset of sanctions in response to the current war in Ukraine, Russia’s isolation in the air has been far from total since Russian airlines and several foreign air carriers continue to link Russia by air to many countries.

My recent survey of international flights in and out of Moscow and Saint Petersburg’s airports yielded a range of foreign connections. Most are with countries that are either economically or politically close to Russia. For example, flights continue to connect Russia to its partners in the Eurasian Economic Union—Armenia, Belarus, Kazakhstan, and Kyrgyzstan—as well as three other countries from the former Soviet Union: Azerbaijan, Tajikistan, and Uzbekistan. Serbia remains the only country in Europe with air routes to Russia and Turkey the only NATO member with such connections. Further afield, Russians can still catch flights to India, Iran, Israel, the Maldives, Qatar, Sri Lanka, and the United Arab Emirates. It will be interesting to see if this list grows in the weeks ahead.

In addition, flying over Russia may be one of the first features of global aviation to return sooner than we think. At present, most international airlines cannot fly through Russia’s airspace between Europe and Asia. The full impact of this restriction is likely to worsen as air travel increases. Flying around rather than over Russia adds costly hours in the air for airlines and does nothing good for combatting climate change.

In conclusion, I would argue that the scale and duration of aviation sanctions against Russia are rather unusual when compared to the Cold War, and that exploring the reasons why can tell us much about this present moment, as well as the history of aviation’s role in the Cold War.

In the long run, however, economic pressures to relax sanctions will likely build before Russia’s war in Ukraine ends, not only from the global aviation industry but also from other businesses and non-state actors that rely on flying employees or customers to Russia.