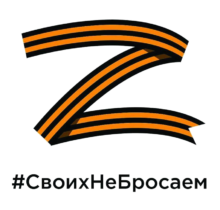 Ben Walsh is from Quincy, Massachusetts and an MA candidate in the Department of Russian & Slavic Studies at NYU.

Above: A St. George’s ribbon arranged as a “zwastika”—a symbol of Russia’s 2022 invasion of Ukraine

Is Vladimir Putin a fascist? Is Russia a fascist country? What is all this talk about “Nazis in Ukraine”? These and similar questions have been hotly debated since the start of the Russian Federation’s full-scale invasion of Ukraine. Scholars and laypeople alike seem convinced that Russia and its leader are plainly fascist; but to understand whether this is the case—and the stakes of answering the question one way or another—it makes sense to3 first explore the term’s history and definition.

Definitions of the term vary. Since fascism first emerged after the First World War, and especially after it brought Europe to ruin in the course of the Second, scholars have been trying to describe it accurately and comprehensively. Typically, definitions of fascism have been agglutinative, picking up new features with each renewed bout of scholarly and popular interest. One cogent definition comes from British historian and political theorist Roger Griffin, who, writing in the 1980s, described fascism as “palingenetic ultranationalism.” For Griffin, fascism is palingenetic in that it promises a total spiritual rebirth of the nation, helping it to rise above perceived past humiliations and modern weakness; it is ultranationalist in that it dials nationalism to absurd and dangerous levels, replacing nation-building around a shared language, culture, or history with mass murder or ethnic cleansing.

Though succinct, Griffin’s two-word definition does not fully convey what makes fascism unique as an ideology and, more importantly, a political movement. It also doesn’t account for the wide variation among fascist movements. In fact, there is not one fascism, but instead multiple forms, each drawing on the unique time and place in which it arises.

An expanded definition of fascism might understand it in terms of its choice of opponents. When it fights along a cultural front, fascism often claims that some left-wing elite, often defined in racial terms (e.g. “Judeo-Bolsheviks” or “cultural Marxists”) is peddling a materialistic and perverted mass culture designed to divest the People of their unique identity—their exceptionalism. Economically, fascism is both more vague and more agile: it may condemn both communism and capitalism, while borrowing strategies from both. Finally, fascism is proudly and self-consciously anti-intellectual. Though they may be inspired by certain texts—for example, in the case of German Nazism, Nietzsche’s Will to Power, Hitler’s Mein Kampf, Spengler’s Decline and Fall of the West, or Raspail’s Camp of the Saints—there really is no “required reading.” Instead, books are often suppressed and even burned.

Perhaps more than any other modern political ideology, fascism is a playbook. This playbook begins with the rise of a charismatic central figure, almost exclusively a man; this central figure often builds a Party, sometimes with a paramilitary wing; after causing enough popular agitation through political showmanship, this Party worms its way into power, forming an unstable coalition that incorporates conservative elements of the existing political order. Despite their glorification of the state and their attempts at taking apparently totalitarian control of the population, fascisms are at arguably most most effective as opposition movements. Taking advantage of popular discontent, economic instability, and political gridlock, they present themselves—the macho, take-charge outsiders in stylish outfits—as the only ones who can “get things done.” Once in power, however, fascists historically accomplish little beyond creating ruthless police states, stripping the economy to line their own pockets, and starting wars they aren’t equipped to win.

At base, the fascist worldview is a bleak one. The world, it claims, is in decline because of the depredations of sexual, racial/ national, or ideological “others” who have conspired to keep the “chosen people” down. Like some forms of utopian socialism, fascism offers a vision of a secular apocalypse, complete with heroes and villains and a chance at glory. With this emphasis on conspiracy and heroic violence, fascism tends to appeal to disaffected young men.

In many ways, Putin’s regime meets the expanded definition of fascism. In recent years, Russian public discourse has become increasingly nationalistic, with Putin positioning Russia as a singular civilization locked in a decisive struggle with a decadent, materialistic, and debauched “West.” At home and abroad, Putin’s regime has sought to overcome the perceived humiliation suffered in the collapse of the Soviet Union and the economic freefall of the 1990s.

The Russian Federation is unquestionably irredentist, seeking to reclaim territories belonging to its sovereign neighbors because they, at one point, were part of a Russian Empire. When these sovereign states seek to integrate with the advanced economies, representative institutions, and mutual defense guarantees of the EU or NATO, Putin and his regime invent a conspiracy of Western subversion and imperialism that is allegedly threatening to destroy Russia.

Moreover, the Russian Federation has, in recent years, taken a hard right turn politically. Women’s rights, LGBTQIA+ Rights, and other progressive movements—by no means universally supported in the Western world—are under attack in Russia. Independent media outlets have been strangled, as has political opposition, with opponents facing jailing, exile, or attempted murder. Russia’s parliament and its major political parties are exercises in legal theater designed to give Putin legal cover for his revanchist program. Around the world, the Russian Federation supports and signal boosts Far Right political movements and meddles in elections to tarnish the very idea of representative democracy. Though the defense of Nazism is illegal in Russia, figures like Dmitri Utkin, the founder of the Wagner Group (a Private Military Company that Putin has illegally employed in Syria, Central Africa, and Ukraine), is a neo-Nazi known to wear an SS uniform and a horned pseudo-Viking helmet. Recently adopted symbols like the “Z”—colloquially known as the zwastika—have added to the impression that Putin’s regime is now an openly fascist one.